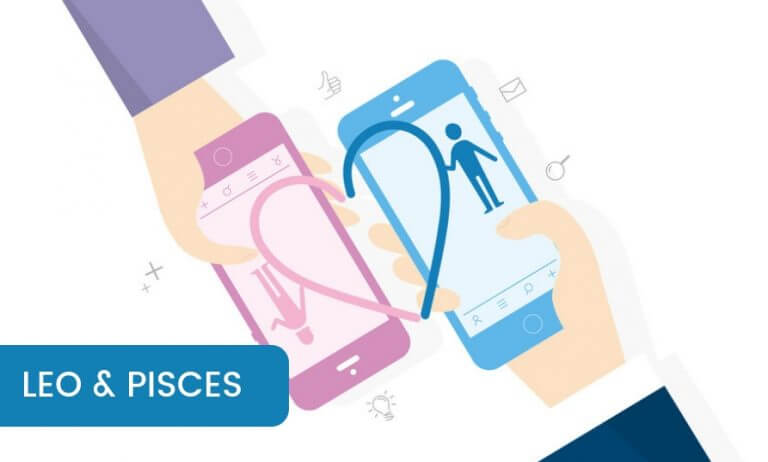 A compatible relationship, between Leo and Pisces, need a lot of compromises and attention because of the zodiac love match between these signs very uneven. Leo with Pisces can become demanding in a way that can irritate the Pisces partner. Leo needs adoration and attention from their partner, Pisces lives in their world and are rather oblivious to this need from their partners. Moreover, the passionate nature of Leo can also affect the compatibility of the relationship as it can often intimidate Pisces, making them second guess the relationship.

When a Leo dates a Pisces, there is a complex mix of contrasting traits that are balanced on a very thin line of instinctual attraction. There is a mutual attraction between the two archetypes of Leo and Pisces, that being the Royal and the Dreamer. Both signs are fascinated by the uncanny world of the other, Leo is enchanted by the ethereal nature of Pisces and Pisces are drawn to the strength and tolerant nature of Leo.

Initially, the dating compatibility of Leo and Pisces is held in high regards, as they can have a romantic affair based on instinctual need that could save their curiosity. Leo, in their passion and romance, can sweep their Pisces partner off their feet. Pisces in return will surround their Leo partner with sensitivity and love. There is a magical courtship between Leo and Pisces that cannot be held back.

The Dreamer, Pisces, cannot resist the royal and regal nature of their Leo partner. This infatuation can build a strong foundation for the signs on which they can build a compatible relationship. There are some issues that can hinder the romantic growth and ruin the Leo and Pisces compatibility. For starters, they have very different values and principles such as the social life of the signs.

Leo compatible signs need to have a good social interest in life, they are a social butterfly and will become quickly uncomfortable and unhappy when chained at home. Pisces, on the other hand, needs to have privacy and leans on the introverted side of life. Moreover, romantic bonds need some emotional feeding from either or both partners to solidify. Sadly, neither Leo nor Pisces have the emotional capacity to feed this bond.

Leo can overly expressive of their emotional needs, while Pisces has a hard time expressing their need for an emotional connection. Pisces can be overwhelmed when their Leo partner vents out their emotions and feeling, making them not the most compatible signs with Leo. Leo and Pisces need to learn to overcome these habits of contrast so their romantic bonds can grow into something more.

Sexual and Emotional Bonds of Leo and Pisces

You would think that the representation of love in Leo and Pisces would be incredibly compatible as they both have intrinsic ability to be affectionate. However, Leo’s self-expression can seem a bit selfish, and the passionate nature can become a brutish addition to their person in a Leo and Pisces relationship. Often times, Leo will think that their Pisces partner is weak and incapable of contributing to the relationship as they lack the strength to keep the relationship floating.

Nonetheless, Leo and Pisces can have an incredible sex life that is unstable and will not last long. Leo will hold a direct and open approach during intimacy, which the Pisces partner will find incredibly embarrassing as they are not secure enough to pull the act off. It makes Pisces not a top contender of being Leo best love match. Leo and Pisces lack the emotional depth needed to overcome the simplest of issues that could arise; it makes their zodiac compatibility very low.

Practically, the Leo man Pisces woman love match does not hold much potential for growth. The Leo man will have a fascination with the Pisces woman, they will be curious about the loving and gentle soul of their Pisces partner. Leo will feel the need to protect their Pisces woman and expect her to shower them with adoration and affection. Pisces woman will offer a loving and affectionate embrace to her man, however, they will soon become annoyed by the overly social behavior of their partner. However, the loyal and regal nature of Leo can pull many heartstrings in a Pisces woman, they can contribute to their relationship compatibility.

Unlike their counterpart, Leo woman Pisces man combination can enjoy a sensual and steamy connection. Pisces man has a serene and loving nature that can manage to impress the fiery Leo woman. They can have the strong sexual compatibility that can forge many other bonds through its strength. There is a chance that both Leo and Pisces will have a problem with the selfish nature of their relationship. Leo woman will need affection and love from their partners, they are not immediately ready to contribute the same affection to their partners. While the Pisces man will not recognize their partner’s needs since they lack the intuitive nature to do so. Pisces man will have to work hard to fit the shoes of a perfect Leo woman’s partner.

Leo and Pisces will have a conclusive reaction towards each other; they can either overcome their differences or become buried in the rush of emotional tides. Nevertheless, Leo and Pisces compatibility allows a mutual love for culture and art, they can have a great companionship by spending time in each other presence. They can have a romantic bond based on close friendship by giving up on their selfishness, as they say, you lose some you win some

Leo and Pisces Compatibility
COMPATIBILITY SCORE OVERVIEW
This is an indicative score from other readers. For a more accurate match, it is necessary to do a synastry compatibility calculation.
What percent do they match?63 Votes
78
Pros
Instinctual attraction
Passionate and romantic
Magical courtship
Cons
Need a lot of compromises and attention
Can become demanding and irritating
Pisces are oblivious to their partner's needs
78
match

Waxing Gibbous Moon
The moon is currently in Libra
We use cookies to give you the best experience. Continuing using this site we assume that you are happy with it.Ok