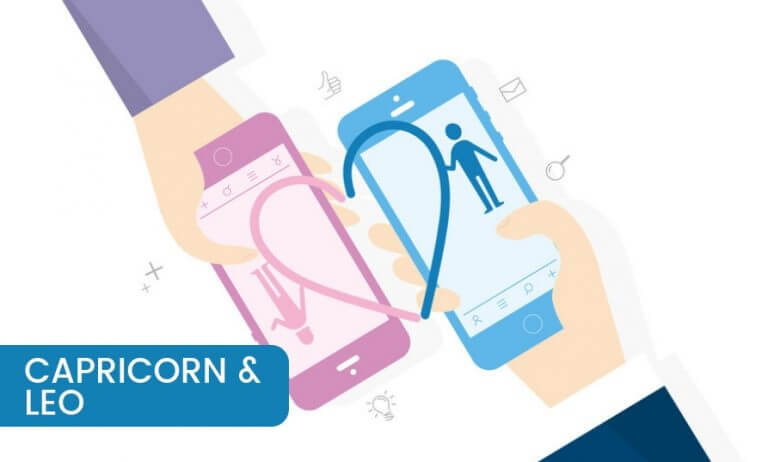 Capricorn has a completely different lifestyle from the easy-going Leo, they have a serious demeanor that is stable and respectful. Leo, on the other hand, has a flamboyant personality that has a fiery nature they find the serious nature of Capricorn boring. Capricorn with Leo partner will be hiding in embarrassment as their Leo partner uses flashy and extravagant maneuvers to have fun on a date. Capricorn and Leo Compatibility suffers from this conundrum, this relationship would lack the mutual respect and companionship that can keep a relationship going for a long time.

There is an obvious disparateness between the personalities Capricorn and Leo partners, which is why this zodiac love match has to face its fair share of troubles. There are some traits that are quite similar between Capricorn and Leo, it improves the Capricorn compatibility with Leo and makes the relationship work. Capricorn and Leo have leading personalities, they like to go about their day and schedule in their unique ways, and it can make the partners admire each other’s peculiar lifestyles.

There is a chance that Capricorn might become irritated by the assertive nature of Leo, they do not like to be told what to do. As a representative of the Sage archetype, Capricorn wants their orders to be followed as they think that they have the best and rational choice among others.

Leo is not a Capricorn best love match in this regard because their archetype ‘the Royal’ does not like being bossed around, they will not let others make them bow down to their command. Even though Capricorn does not like to be the center of attention and will only advice from the sidelines, it will not bode well for the Kingly or Queenly nature of Leo. A romantic relationship between two hard and fast personalities such as Capricorn and Leo will have a hard time growing.

Not that the zodiac compatibility between Capricorn and Leo is completely useless, there is a fine balance of boundaries that can help this couple enjoy a compatible relationship. Leo and Capricorn compatibility can work if both partners have their own fields where they can rule and let out their alpha-like emotions. Having their own area of expertise can grandly improve the relationship as there will be no fight over cumbersome matters that can be described as ‘who gets to wear the crown today’.

The Companionship between Capricorn and Leo will also struggle with trust issues as Capricorn dislikes secrets, where Leo hides behind their flamboyant façade. If Leo does not open to their partners during the relationship, Capricorn will become increasingly irritated and suspicious, which will eventually lead them to have a fallout. Capricorn compatible signs must be faithful and open about their feelings to be a good match. This is not the only hurdle Capricorn and Leo will have in a long-term relationship, Capricorn will always try to have financial stability in a relationship while Leo will feel stifled under this bland life, they like spend lavishly and has no qualms about finance.

On first glance, Capricorn man Leo woman love match seems like a very bad idea as they are not compatible, initially. Capricorn man has respectful and stable principles that thrive on conservative values, he will find the flashy and overly-proud Leo woman not interesting or worth their time. Leo woman, who is an independent and enthusiastic individual, will find the Capricorn man very boring and will not find their nature fascinating.

Once they start to date due to physical attraction, they will find some mutual ground on which they can build their relationship. Capricorn man and Leo woman will share an assertive nature, a leadership quality, which can impress the other sex. Capricorn man uses their wisdom and authority, while Leo woman improvises through charisma and fiery personality. Leo and Capricorn compatibility can work, in this case, if they learn to properly communicate the issues and the mutual affection they have for each other.

Nonetheless, both partners can become closer because of their mutual love for power, they can be close companions as they seek their own thrones with the help of their partner. As they grow closer, Leo man can find the loving woman under the Capricornian traits, while Capricorn woman could find the larger than life nature of Leo incredibly endearing. Capricorn woman and Leo man can become a power couple if they learn to play their card right, however, Capricorn woman should allow their Leo partner to add some fun and excitement into their lives.

Leo is most compatible with Capricorn with regards to their practical nature, which both signs share as they love to be productive in the best and clean way possible. When Capricorn dates a Leo, their aloof personalities can be changed over time by the passionate and attentive nature of their Leo Partner. With this exchange in mind, Capricorn and Leo compatibility can allow a sensual and satisfying relationship that is built on mutual passions.

Capricorn and Leo Compatibility
COMPATIBILITY SCORE OVERVIEW
This is an indicative score from other readers. For a more accurate match, it is necessary to do a synastry compatibility calculation.
What percent do they match?28 Votes
79
Pros
Mutually supportive
Are able to understand each other
High compatibility
Cons
Have different styles of approaching situation
Leo’s can be unfavourably controlling
Leo can end up hurting capricorn
79
match