10 Reasons Why It Is Hard to Love Sagittarius 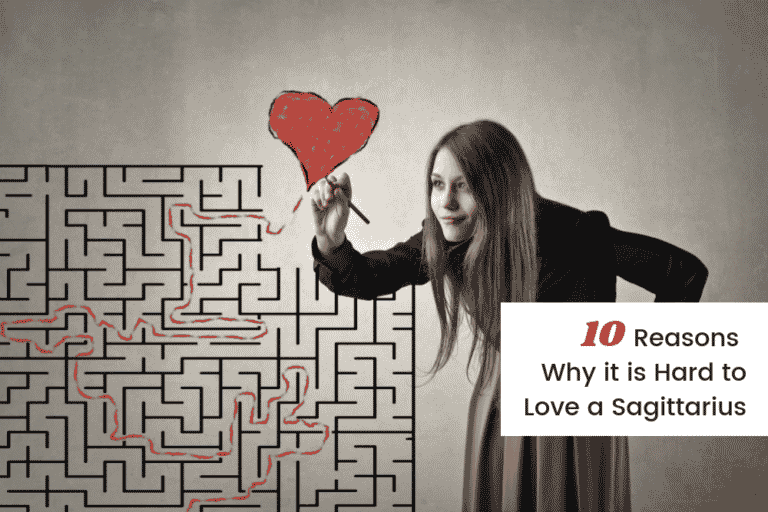 Everyone wants a perfect relationship, they always expect everything to be working alright. It is in human nature to expect but when the same feelings aren’t reciprocated it always bugs both the partners out. And it is the root cause of misunderstanding between them. When it comes to a Sagittarius man, he is often carefree, clumsy, tactless and straightforward. For many Sagittarius women they are short-tempered and at most might behave weirdly in many situations. All these traits contribute to Sagittarius’ love life and can make it harder for the relationship. Discover the main reasons why it is hard to love a Sagittarius.

1st Reason: The Art of Manipulation

A Sagittarius is brutally honest and can get done what they really want, they usually don’t care about the way they get things if they get it.  They know exactly how to manipulate anyone, this makes the partner of a Sagittarius easy to hurt and annoyed with such behavior. This can cause greater harm to a relationship and its one of the main reasons why it is hard to Love a Sagittarius.

This never implies them to be stupid or messy, though there are many indications in their daily life. Like if you take the example of their room when one steps into it which fairly resembles a recycling factory you would surely find anything but see everything instead.

If a Sagittarius doesn’t find anything in that mess, they would start yelling and shouting blaming others for misplacing their items. This behavior proves how much misunderstanding can go on between their partners and could be a hard turn in a relationship for both Sagittarius Man or Woman.

3rd Reason: Doesn’t Like to be complimented at all!

Now this one is surely a bummer; they usually don’t like to be complimented at all they think they are not up to the mark or hold any special thing. They never own to their excellence and always wants to improve. This is something the most sensible people do. But in a relationship, compliments are always for the better of it and if one of the partners doesn’t appreciate it then it makes it hard to be good at times.

A Sagittarius is carefree in nature, they usually care less about other people feel as self-care is their priority. They accept whatever is good or bad and don’t struggle much for anything. They don’t put too much of their effort into it. This might make their partner feel unwanted or that Sagittarius doesn’t care about them.

5th Reason: They Are Stubborn

Compromise is the key to a healthy relationship, those who are willing to change their decisions or themselves as well at certain circumstances is what makes people come together and care. A Sagittarius is stubborn in nature they don’t like to listen to others and always try to prove their point of view. Or in simpler terms enforce their will and do not change what they have thought about or stand firmly on.

In relationships, it’s wrong to hold grudges against each other and hate your partner for certain thing which could have hurt in the past. Everyone makes mistakes, but people come closer to each other when they forgive each other mistakes and move on.

Sagittarius cannot do that; their stubbornness is what makes them bad at forgiving and they remember it till a long time. It will eventually come handy for them later when they want to hold you responsible for anything; this deteriorates the quality of Sagittarius Love life.

People usually open after a few talks and can easily understand each other. But a Sagittarius don’t really cater to your needs of developing a connection for better understanding. They are more like hard-hearted and try to have a know it all attitude. They like to do it their way instead of listening or acting on anyone else advice.

8th Reason: They are clueless

They are clueless and tactless in all sense. They will lead to an intellectual discourse, which will be nothing more but a rant or raves about someone. This is a negative trait that might offend other people. In a relationship, one must be able to listen to their partner and always think twice before saying anything that might hurt another person since it affects the Sagittarius love life.

Sagittarius is very self -centered, this causes them to not take an interest in other lives even if they are close to you. If you work out on your problems or share it with a Sagittarius, they won’t even consider them as problems. Instead, they would try to say it’s okay and just move on so that they could start their conversation which they deem important.

And there goes your caring, whenever you are in a relationship with a Sagittarius this thing really makes a big misunderstanding between the couple. Since they give you too much space and never care to inquire about you but mainly doesn’t need a reason to do so. You kind of forget if you are in a relationship or not, this might cause many misconceptions and eventually draw a hard line between both the partners. That is not something a relationship needs. Thus, making it very hard to love Sagittarius.

Keeping in view the insight of a Sagittarius is that they are self-centered, and their behavior revolves around self-interest. This makes it hard to understand them or even know their intentions at times, which is the main cause of being hard to love.