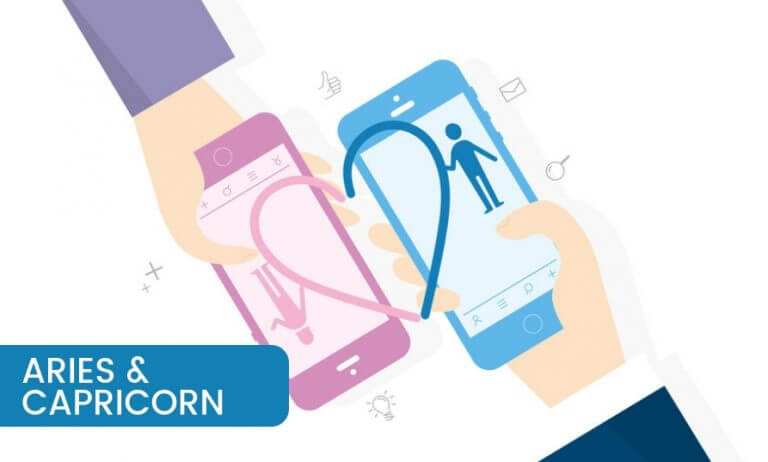 The best way in which you can describe the alliance of Aries with Capricorn can be best described by the relationship that exists between some natural enemies in the universe. Like that of cats and birds and cats and dogs. This is precisely the way in which Aries and Capricorn interact with each other when they are at their worst.

This is the particular reason as to why this is not a very easy relationship. It is tough to predict who will get out of it as a winner, as both of them will feel awful most of the time and the only thing with which they can be relieved is a separation between the two. So, it is believed that this is not a very compatible relationship.

The only chance that they have to make it a successful relationship is by wideness of their expectations and views and as well as showing unconditional respect towards their partner. Aries and Capricorn can truly complement each other, but only in the case where they look for all the good qualities in each other and also highlight the qualities that the two possess.

Unfortunately, the destructive nature of the rulers of these two would hardly allow them to be so optimistic and have a positive approach towards their partners. Hence the zodiac compatibility of Aries and Capricorn is not much appreciated.

The Aries and Capricorn in Relationships

To make a relationship work between Aries and Capricorn can be trying at times, but this does not mean it is entirely impossible. However, Aries can be protected by the earthy nature of Capricorn, providing them with a safe place to land. They are mature enough to understand the fact they need personal space to be independent and should be left alone for a while without making this their matter. And since Capricorn has their feet firmly planted in the ground with a sensible head, they can help in bringing about stability in the lives of Aries which is very much needed.

Aries and Capricorn both are considered to be finer of things, so there are chances of them having good dating compatibility between them as both of them have the mutual enthusiasm of visiting the new hottest restaurants in town, wearing great tailoring outfits and getting all dressed up as well as making it to exotic destinations. These are the areas where Aries compatibility with Capricorn takes a whole new direction.

When we talk about Aries and Capricorn compatibility, we figure out that Aries man Capricorn woman relationships are not very successful in general. Because Aries man has to go through special troubles to connect with their partners, feel compassionate about them or to connect or to think about the two. It is much easier for an Aries man to do everything alone as they do not like the interference of others in their lives.

On the other hand, when we take the Aries woman Capricorn man into consideration, we see how different it is from the relationship as that of Aries man Capricorn woman. Aries woman turns out to be a very faithful and will always be there to support her partner. In most of the cases, the Aries woman has enough energy for the two of them. But if she does not love her partner in real, then this relationship will result in nothing less than a rollercoaster ride.

Every time when Aries and Capricorn tend to fall in love with each other, most of the time this happens in the domain where Capricorn is in charge or quite often at work. However, the tension between the two may start because of Aries as they have a nature of continuously arguing back and they also start fighting over very small things. Because of this kind of relationship in most of the cases both Aries and Capricorn both prefer staying at a safe distance from each other, however, sometimes they can be insanely attracted to each other. Hence this proves that both of these do not make a perfect zodiac love match.

After viewing the Aries and Capricorn compatibility, this does not turn out to be the best possible match. Through thick and thin or for better or worse Aries takes their vows quite seriously when it comes to commitment, however, the signs that are most compatible with Aries are Leo, Sagittarius, Aquarius, and Gemini. These are the particular signs that make Aries best love match with and are also considered to be Aries compatible signs when their compatibility is matched with the Aries dates.

In this very special case, it would be better if we do not refer to this paragraph as emotions but rather call it understanding. The problem of Aries and Capricorn begins with the way when they start to understand each other. When initially they enter into a relationship they tend to have an image of each other as somebody they could become after a little bit of effort is put into their growth. But the main problem here is that none of them wants to change.

However, the unrealistic image that they have portrayed might connect their emotions at first, but this might not last long. So, this is precisely what we would call it as lack of understanding which exists between both Aries and Capricorn because these two are not seen to be crazy in love with each other but fact, they are in love with each other’s false image.

Aries and Capricorn Compatibility
COMPATIBILITY SCORE OVERVIEW
This is an indicative score from other readers. For a more accurate match, it is necessary to do a synastry compatibility calculation.
What percent do they match?47 Votes
69
Pros
Mature
Mutual enthusiasm
Attracted to each other
Cons
Destructive nature
Unwilling to change
Natural enemies
69
match