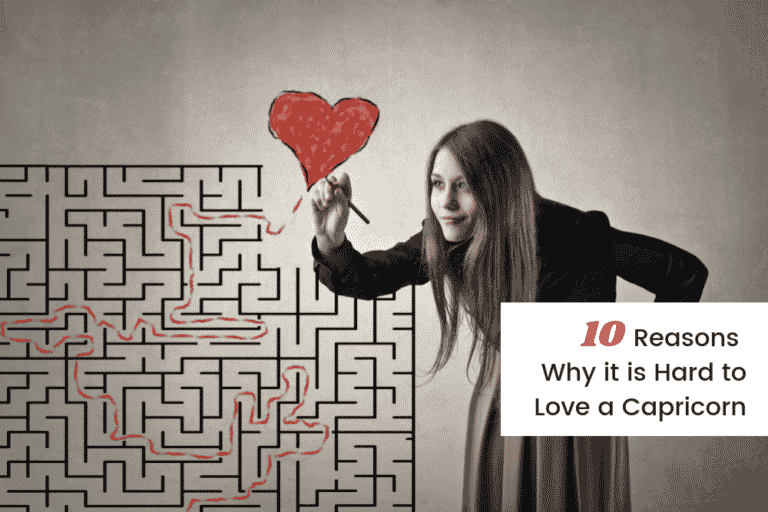 Everyone knows Capricorn from their bossy nature, where they have this outer shell of firm seriousness that is prominent. They have a win-win attitude towards life, which makes the desire to succeed in everything.  While running up the ladder of life, they also have some traits, which make it harder to understand them and have a healthy relationship. Therefore, if you are by chance dating a Capricorn you might have to be aware of what you are getting into.

The following are some of the most common hurdles to love a Capricorn.

Capricorn does not burden themselves with the thought of trying something new, and they have the vibes of Bureaucratic inertia to them when it comes to following rules. They tend to focus on the outcome, and that for them is a success. They cannot take risky decisions in tricky situations and tend to go by the book, hence in a relationship where no compromise is made, it makes it less appealing, i.e. one loses interest. Hence, this makes it difficult to love a Capricorn.

Both the Capricorn man or woman has an innate sense of caring, and they care too much. They are always nice to everyone and try to help. This might make it seem that they are the same towards their partners, that is true, but with too much care they feel like they owe to their friends or family, which brings undue responsibilities on them. They attract people who are too needy and in that process are used by certain people. Apart from that, they are not able to give time to their partners who cause hurdle in the relationship and makes it hard to love a Capricorn.

Nowadays life is like survival, and there is less living. People, in fact, have become more materialistic in nature, but this is one of the traits of a Capricorn. They tend to leave a legacy behind and work in order to gain the material benefits. For them, life is like competition, and they need to win the race to reach the top of the ladder in order to prove their worth and show their enemies their capabilities. This attitude is also dominant in their relationships, in which they tend to focus on the material benefits rather than emotional ecstasy. Therefore, a Capricorn love life is damaged to some extent.

Yes, you guessed right! Being bossy is like their charm. They have this dominant trait to boss people around since it is in their nature. They are always motivated, and their confidence is too high. They always take up the main role in every situation and are strategic planners. They have leadership skills and always tend to be on top on dominating positions anywhere they work at or are a part of since this is integrated into their personality. When in a relationship you won’t always get to have your say and will always end up being ordered around.

Since Capricorn are major strategic planners, they have such sharp intuition, or one might call it learned the wisdom that they never tend to make mistakes and, in most situations, their analysis turns out to be right. This causes them to believe that they are right in every situation and thus causes the demise of Capricorn’s Love life.

Self-righteousness can be very dangerous in relationships. When one cannot listen to reason and consider him/her-self true, then it can only mean that they are not open to compromise which is a key factor for a healthy relationship. Hence making it tough to love a Capricorn.

Capricorn is very much goal-oriented and has their own ways to get things done, they are honest about their opinions, and that’s why they tend to follow their methods in a given situation. They can get very persuasive, and when this is applied to a relationship, you will always have to face constant pressure in accepting their demands or ideas which they have. This makes it hard to love a Capricorn.

7th Reason: Expect too much

We all have high expectations in anything we put struggle into, that’s human nature but in the case of a Capricorn they do hold high standards for themselves, and this is because they work on it a lot. They expect the same out of their partners, but the problem is that not everyone can be perfect or come fit on these expectations which causes a Capricorn to lose interest in their partners since they think they are not wanted in a relationship. Thus, making it a bit difficult to love a Capricorn man or woman.

8th Reason: Neither Forget, nor forgive

This might seem annoying to their partners, that’s why many people always inquire why it is hard to love a Capricorn. Because the relationship is all about understanding each other and leaving the past behind. One simply cannot find excuses for their partner flaws in their past mistakes all the time; revenge isn’t something that should be present in a relationship. Thus, this makes it very tough to love a Capricorn.

Well to be true, Capricorn is too critical. They tend to criticize everything because they want everything to be in perfect order according to the plan. If in their relationship something goes wrong, they won’t shut up about it until making it into a fight. This is because they have set very high standards for themselves. That’s why it makes it harder for a Capricorn to love.

Capricorn can always keep their cool, but sometimes the stoicism does not work, and they tend to have a disastrous meltdown. They say what is on their mind, and it just ends everything. So be sure not to witness the judgment day.

When analyzed Capricorn is difficult to approach because they have a predefined mindset with a set of codes, they live their life on, it’s hard for anyone to adapt to a person that easily. Hence, for them to change they need to adapt to other people’s feelings and try to look at things from a different perspective.