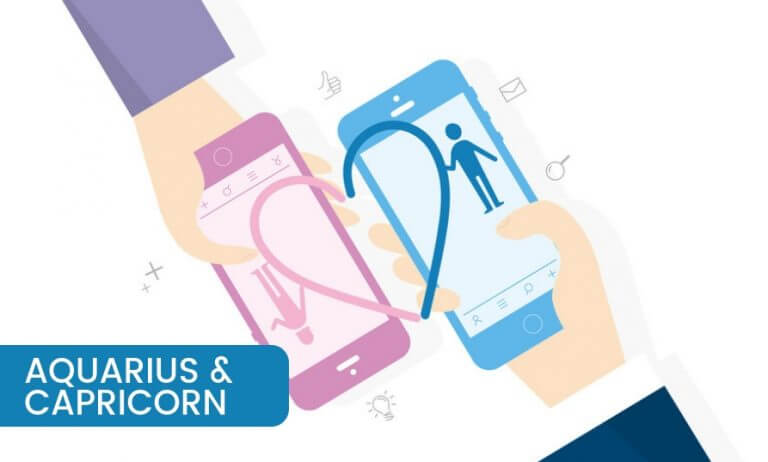 Not too smooth. Yep, this is what you can expect from Aquarius and Capricorn getting together. Of course, there is a lot more when you go into the depths of Aquarius compatibility with Capricorn, and this is what we intend to find out in this article. Zodiac compatibility is something that enjoys immense popularity in many different circles of social life. Due to this popularity, astrologers have been working day and night for centuries to provide accurate analyses for every single combination that could be made from zodiac signs, declaring a zodiac love match here, and warning of forming one there.

For Aquarius and Capricorn, the skies do not clearly look in favor. Firstly, it is the zodiac elements of air and earth that come together for these two signs. It is common knowledge that these two elements do not seem to get along very well. Apart from that, it is also the factor of Aquarius dates that is not exactly in favor of an Aquarius and Capricorn couple. The two signs do not harbor a very similar position of the planets, resulting in a lot of discord. Let us now look at each component of their relationship separately in order to determine where the root cause of the problem lies.

Aquarius and Capricorn Sex and Intimacy

To determine the dating compatibility between any two signs, the first thing that astrologers look towards is sex and intimacy. And quite rightly, because this is the factor that determines whether any other factors will exist to be judged or not. Unfortunately for this department, Aquarius and Capricorn are not quite lucky. Although both are traditionally ruled by the same planet, there is still a little imbalance when they get together in bed. It is true that they want the same things from each other and understands when their partner wants it.

However, the difference comes in their pace of doing it. Each person tends to perform sex at his or her own comfort level, which is not the one their partner really appreciates most of the times. Astrologers believe this to be caused by the difference in their zodiac elements, as air is freedom loving and very expressive, whereas earth loves to settle down in favor of everything traditional.

Communication is the department where the face-saving happens, and Capricorn gets a little chance to be included in the Aquarius compatible signs list. The surprising thing about communication between Aquarius and Capricorn is that they hardly talk at all! This might come as a surprise to zodiac signs that basically live off talking about anything at all. But in fact, it is one of the very few reasons for providing actual fuel of sustenance for this relationship.

It does not mean that Aquarius and Capricorn do not talk at all. It is just that they have a silent agreement to respect each other’s differing opinions by not being an agent working against it. This provides for a very good strategy in which both the people get to support their partner in their life’s ventures without being critical or causing any distress. The partner, in turn, does the same, enabling both Aquarius and Capricorn to achieve their dreams.

Emotions are something that should absolutely not be bet upon in an Aquarius with Capricorn relationship. In a straight-up analysis, astrologers would have you believe that both these signs are naturally very unemotional, which does not let them show any emotions or compassion in their relationship.

However, there is more to that theory than just being unemotional according to the stars. The reason that Capricorn is not an Aquarius best love match in terms of emotions is that Capricorn is an earth sign that demands emotions straight up. Aquarius, being an air sign, expects their partner to be as forgiving and open-minded as themselves, which can cause a difference of opinion. The fact that this is not communicated properly is even more dangerous as both Aquarius and Capricorn then harbor distressful feelings for so long that it becomes unbearable for them to live with their partner at all.

Aquarius and Capricorn Compatibility: Is it gender-specific?

For any compatible relationship, zodiac compatibility provides ample answers. Many people do ask if the analyses we provide are affected when a specific gender takes up a specific sign. Not technically, is the answer to this. Genders are only required when making an individual’s birth chart. And compatibilities between two people are then calculated based on a comparison of their birth charts.

Aquarius and Capricorn Trusting Each Other

Trust is something that puts Capricorn back in the game of being the most compatible with Aquarius. Although it does not finish the race on top, it does get an honorary mention because of how well the couple seems to trust each other.

With the zodiac elements completely not in favor, it is the Aquarius dates that come to the rescue in this regard, providing a pattern for the planets that may not favor other things, but definitely favors great trust between Aquarius and Capricorn.

Their mutual trust for each other comes from their lack of trust in the world otherwise, making them find shelter in each other against a world they believe they must fight against

Aquarius and Capricorn Compatibility
COMPATIBILITY SCORE OVERVIEW
This is an indicative score from other readers. For a more accurate match, it is necessary to do a synastry compatibility calculation.
What percent do they match?42 Votes
66
Pros
Respectful and patient
Immensely independent
Incredibly trustworthy
Cons
Emotions are neither of their strong suites
Are not always on the best terms
Can get annoyed by each other
66
match