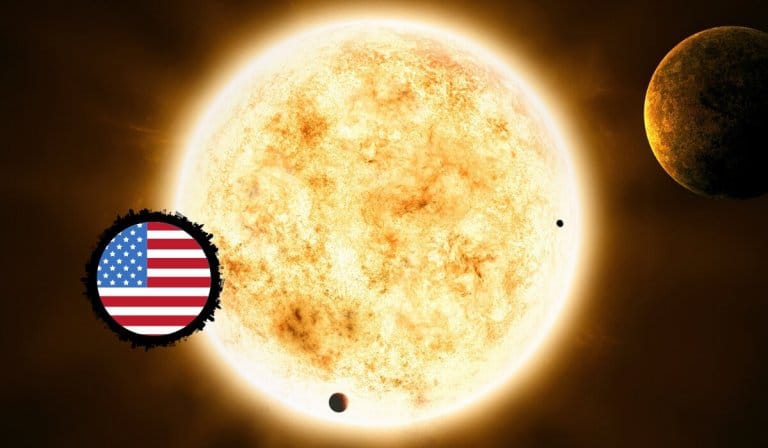 Nations, like people, have a birth chart.  The chart may be determined by a key event or the signing of a document that ratifies the existence of the nation.  Understanding the birth chart of a nation is key to understanding that nation’s culture and potential impact on the world stage.

This article will look closely at the Sun sign of the United States, using the signing of the Declaration of Independence on July 4, 1776, in Philadelphia, Pennsylvania in the late afternoon of that day as the birth of the nation.  The most commonly used chart was cast by British astrologer Ebenezer Sibly for 5:10 pm, which gives the United States a Sagittarius Ascendant.

In their book, Astrology, the Divine Science, Marcia Moore, and Mark Douglas give Sun in Cancer the following keynote: “the power of individuality manifests protectively”.  And the symbol is “a woman sets a lighted lamp in the window bay of her home” (91).  Some very powerful keys to the United States identity reveal themselves immediately: individuality, protectiveness, and a beacon.  As a cardinal sign, Cancer is one of the four leadership signs.

Certainly, a cornerstone of American philosophy is the sanctity of the individual as the key to a successful society. Over the course of American history, the foreign policy has been a mix of isolationist, America first approach that evolved into “policeman of the world” with a woman holding a torch at the port of entry as a beacon for world travelers to come to make a new life and enrich the status of American society.

Sun in the 8th House

Further into their book, Moore and Douglas, state that the Sun in the 8th House, with Sagittarius on the Ascendant, denotes “identification with social values” (329).  This also the house that deals with death/rebirth, transformation, and the resources of other people.  This is not the easiest placement for the Sun since it can produce greed when the shadow energy is strong. The healthiest version of this placement is, “we are here to help”.

Sect and Decantes of the United States Sun

The US has a “day” chart since the Sun is above the horizon, so it is the sect ruler of the chart, which is favorable.  It is 13 degrees, which means it is in the 2nd Decantes of Cancer, making it a Cancer/Scorpio Sun, and thus a powerful change agent.  The Scorpio theme shows up with the House placement and the Decantes placement.  There is a decidedly “heroic” bent to the nature of this country’s Sun.

Jupiter is the greater benefic in the US chart because it is both in the sect with the Sun, above the horizon (experiencing “joy” by hemisphere), and ahead of the Sun (or rising before the Sun) so it is “fast” moving.  It loses some “joy” because it is a feminine sign and feminine house.  Saturn is the greater malefic because it too prefers to be in a day chart, in sect with the Sun, and above the horizon.  It feels “joy” by being in a masculine sign and house.

Venus is the lesser benefic, mainly because it is out of sect, preferring to be below the horizon and behind the Sun, which it is not. It does get “joy” from the fact that is in a feminine sign and house.  Mars suffers a similar fate, preferring to be behind the Sun and below the horizon (instead, it is in front of and above).  Like Venus it gets “joy” being in a masculine sign and house.  The US Sun clearly gets its best benefits from Jupiter and Saturn.

If we follow the modern rulership we move from the Sun to the Moon, but instead of going to Saturn, we go to Uranus (the modern ruler of Aquarius). This pathway takes us to Gemini and from there to Mercury, which also sits in Cancer.  So, the final dispositor from the ancient system is Venus and the one from the modern system is Mercury.

With the Sun in the 8th House and having a Scorpio Decantes, we must look at the placement of Mars, the classical ruler of Scorpio, and Pluto, the modern ruler.  From the 8th House Sun, we go to Mars in Gemini, which brings us back to Mercury in Cancer.  If we take the modern route and make our first direction to Pluto, we then end up in Capricorn, which takes us to Saturn in Libra, then over to Venus in Cancer and we stop at Venus.

In both instances of Sign (Cancer) and House (8th), we end up with Venus and Mercury as the two most important points the Sun “looks” to for guidance.  Both share the same Sign with the Sun, so the Cancer energy is even more profound where the Sun is concerned.

With the Sun at 13 degrees and 19 minutes, the Sabian Symbol is 14 Cancer.  In his book The Sabian Symbols, Marc Edmund Jones identifies this degree as “a very old man facing a vast dark space to the northeast”.  Further, he writes, “This is a symbol of the immeasurable reaches of past experience as a strengthening of the human spirit for its immediate destiny, and of the eternal rebirth through which man may discover that present aspiration and future achievement are without the slightest limitation in any terms of events to come”.

He adds, “when positive, the degree is a highly effective enlistment of deeper and hidden elements of life for some momentary end, and when negative, lack of purpose and utter chaos in understanding” (252). Another element of the United States personality is unlimited achievement and innovation, “eternal rebirth through which [the US] discovers present aspirations and future achievement without the slightest limitation”.

The last piece of information to consider with the US Sun sign is the aspects of points.  First and foremost is the conjunction of the Sun and Jupiter.  The conjunction alone indicates a powerful need to expand, put its philosophy and beliefs out into the wider world, and “play the hero”.  Further, with Sagittarius as the Ascendant, the chart ruler is Jupiter, adding even more power to its placement near the Sun.

Additionally, Mercury (Communication) and Venus (Relating) are both in Cancer even though they are not near enough to count as conjunctions by degree.  They are, however, conjunct by sign. While the Sun and Saturn are in a challenging (square) aspect, this aspect is powerful since Saturn is well-placed on its own.  Jupiter and Saturn are major players in the Sun’s energy in this chart.

Not as well-known, but just as powerful and important are parallel and contra-parallel declinations alignments.  The US has a less than 1 degree separating parallel between the Sun and Jupiter and a less than one-degree contra-parallel between the Sun and Pluto.  According to the work of the Magi Society in their book Astrology Really works, these aspects would be considered Super Aspects, indicating profound power.

Without a doubt, the placement of the Sun in the US chart is quite powerful and fortunate.  It is not hard to see why this nation would rise to prominence and exert its beliefs and power out into the wider world.  Join me next month for a close look at the US Moon.

Pluto Conjunct Saturn and Jupiter in 2020