In his book, The Inner Sky, Steven Forrest, describes the primal triad as the Sun, Moon, and Ascendant of an astrology chart.  Emphatically, he argues that the first step to interpreting a chart involves ignoring “everything until you have thoroughly grasped the Sun, Moon, and Ascendant”. Further on he claims, “Regardless of what signs and houses they occupy and what aspects they make, they are the kingpins of the birth chart. Nothing that is not well supported by them is likely to figure prominently in the personality” (216).

This article will look at the Cancer Sun, Virgo Moon, and Sagittarius Ascendant of the United States Sibley birth chart erected by English astrologer Ebenezer Sibley for 5:17 pm on July 4, 1776, when the Declaration of Independence was signed in Philadelphia, Pennsylvania. With this time, the Sun occupies the 8th House; the Moon, the 10th House, and the Ascendant, the 1st House in a Whole Sign chart.

The Birth of a Nation

Below is a copy of the US Sibley Chart: 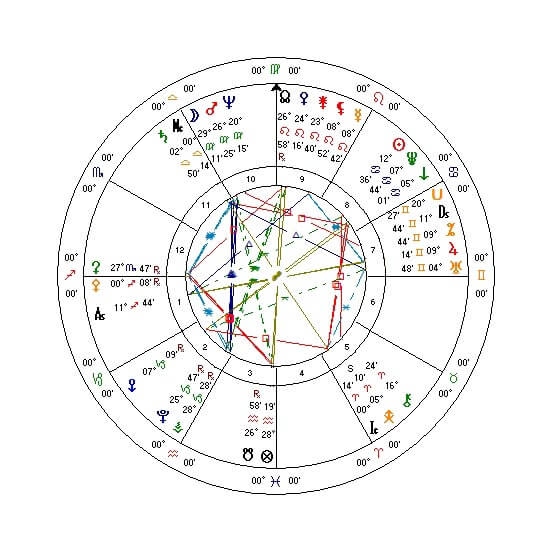 Sun in Cancer in the 8th House

The United States Sun is 12 degrees and 36 minutes of Cancer and occupies the house dealing with shared resources, sex, death, and power.  The planetary ruler of this house is Pluto, formerly Mars, before Pluto was discovered.  The sign that naturally rules this house is Scorpio.  If we connect to these pieces of rulership, then we have to pay special attention to the US Pluto in the 2nd House of Security and Scorpio ruling the 12th House of Spirituality in the US natal chart.

Power issues abound in the identity of the United States, as do issues of privacy (both Cancer as the Sun sign and Pluto retrograde in Capricorn in the 2nd House).  Power is also the “spiritual” issue or purpose of the country.  The country functions as a change agent, either reluctantly or aggressively depending on circumstances.  Historically, the United States has espoused a protectionist and isolationist foreign policy while actually evolving into a world power with tendrils throughout the modern world.

While the Cancerian energy is meant to be nurturing, it’s placement in the house ruled by Scorpio means a constant struggle to not allow abuses of power to manifest within or outside the country.  There can easily evolve the shadow energy of “mother knows best” that will take the country away from the rather super-heroic ideal that Cancer can embrace and demonstrate to something more passive-aggressive and emotionally abusive.  It is not an accident that the superhero genre developed as a purely American cultural phenomenon.

The Sabian Symbol for the US Sun is 13 Cancer, “one hand slightly flexed with a very prominent thumb. This a symbol of that belief in his inherent supremacy over all other orders of nature by which man is characterized most fundamentally, dramatized by his quite normal confidence in his ability to deal with every eventuality of day-by-day activity and relationship. The keyword is DETERMINATION. When positive, the degree is exceptional steadiness and a high sense of self-responsibility in every issue of the moment, and when negative, unnecessary aggressiveness and self-defeating shortsightedness” (252).

The Moon in Virgo in the 10th House

The United States Moon is 29 degrees and 11 minutes of Virgo and occupies the house dealing with prosperity, business, ambition, and authority.  The planetary ruler of this house is Saturn.  The sign that naturally rules this house is Capricorn.  If we connect to these pieces of rulership, then we have to pay special attention to the US Saturn in the 11th House of Community and Capricorn ruling the 2nd House of Security and Personal Resources in the US natal chart.

Hard work and a “pull yourself up by your bootstraps” mentality informs the soul of the US.  Rags to riches is a common theme especially in the early period of American history, after the Revolutionary War and the Great Depression.  If the subways system of New York City is compared to the arteries of the heartbeat that resides in that city, we can see a “working class” service heart pumping the “blood” of the country. America has a particular soulful feel for the blue-collar worker who solves problems and invents new technologies to share with the world (the telegraph, the phone, the car, the airplane, television, and so on).

The shadow of Virgo ruling the 10th House and Capricorn ruling the 2nd House is a collection of personal wealth that does not always return to the workers that are the foundation of the industry.  Unions had to fight a difficult fight to come into existence and have all but lost any real power in the modern era. Greed is a particular shadow for these earth sign placements.

The Sabian Symbol for the US Moon is 30 Virgo, “a false call unheard in attention to the immediate service.  This is a symbol of human responsibility as an immortality of the soul, and of a way of living which has achieved an absoluteness of attitude or understanding and is able in consequence to dramatize a high personal competency in everyday problem-solving. The keyword is SAFEGUARD. When positive, the degree is exceptionally gratifying self-fulfillment through the development of genuine integrity, and when negative, consistently witless indiscretion” (328).

The Ascendant in Sagittarius

The United States Ascendant is 11 degrees and 44 minutes of Sagittarius, making Jupiter the ruler of the entire chart.  Jupiter is in the sign of Gemini and the 7th House of Partnerships and Laws in the US natal chart.  Jupiter is about expansion, so it is not surprising that the United States became the first superpower country. Also, the country expanded westward after establishing its independence and attained global reach after World War II.  Currently, as fitting a Jupiter rulership, it boasts the world’s largest economy.

The Sabian Symbol for the US Ascendant is 12 Sagittarius, “a flag that turns into an eagle that crows.  This is a symbol of the balance which every individual must maintain between the established allegiances which create the substance of his conscious selfhood and the idealized ambitions by which he is self-sustained as an identity in his own right.  The keyword is ADJUSTMENT.  When positive, the degree is successful self-establishment through genuine self-expression, and when negative, idle prejudices and unsubstantiated claims” (221).

Putting It All Together

In its best, most positive expression the United States has a life path (Sun in Cancer) devoted to helping others in need, both within and outside the country.  Doing the soul work means acting from a place of service (Moon in Virgo) while sharing knowledge and wisdom with the wider world (Sagittarius Ascendant).  In the shadow form there can neediness to be needed and a shame associated with mundane work and the lower class of citizenry, all while blowing up the ego of self-importance and forcing it on the world stage.  Harnessing tremendous potential and coupling it with compassion and helping to lead in the wider world is a viable theme of the primal triad of the United States of America.