Uranus is one of the slower moving outer points in astrology.  It takes about 8 years to move through a sign and it governs radical change, wisdom, and “out with the old, in with the new”.  This year, 2019, Uranus left Aries and entered Taurus.  Innovation was remarkable during the years Uranus was in Aries (2010 – 2019).  Now the question, with Uranus in Taurus, is, “what will stick?”  Will I be buying groceries with bitcoin or be able to purchase a driverless car at a local dealership by 2027?

More importantly for this article, what will Uranus in Taurus potentially mean for the United States.  Taurus energy focuses on stability and security, and this energy rules the 6th House of Service and Day-to-Day Work (i.e., jobs!) in the United States chart.  So, what can we expect?

The Radically and Rapidly Changing Nature of Work

Most of the work and career narrative in US history, since the beginning of the assembly line for the Model T Ford in 1913, has involved finding a stable job, working it for the better part of a lifetime, 30 to 40 years (ideally), and retiring.  You could do this work for corporations, the military, or civilian government.  This narrative certainly makes sense with all of the US work/earth houses ruled by earth signs (Capricorn/2nd, Taurus 6th, and Virgo/10th).

That narrative has changed, but the echoes of the narrative still find their way into the public domain with recurring nostalgia for manufacturing and a unionized workforce. Today the new reality and emerging norm is based on a fringe element of the economy from 20 years ago, which would include freelance work or independent contracting, or working “gigs”.

“The term ‘gig economy’ was first coined by journalist Tina Brown in 2009. She wrote about the trend of workers pursuing ‘a bunch of free-floating projects, consultancies, and part-time bits and pieces while they transacted in a digital marketplace.’ To sum up, Gigs are either skill-based assignments or need-based tasks”.

Rather than working 1 job over the course of a lifetime, as was the case of my grandparents generation, or possibly 2 careers over the course of a lifetime, which was the case for my parents, my generation (40 to 60) has seen more changes and variation in career, but nothing like what my daughter is likely to experience.  As it turns out, I am actually now a member of the gig economy, putting together a living doing freelance, contract, and one-on-one work in a constantly dynamic way.

The “gig” economy will make sense with Uranus moving through Taurus in the US 6th House, which does deal with day-to-day work and the skills needed to succeed.  Uranus is a point associated with new technologies, new vision, and rapid change.  In the age of the Internet and globalization, embracing the rapid change and pursuing it will match how the energy of Uranus wants to express itself in Taurus.

Uranus Today, and Previously, in Taurus

If you look at the chart below and find the 6th pie piece (or House), you will see a spaceship-like symbol that is orange that represents Uranus.  It entered the 6th House this year and will stay there for roughly 8 years. 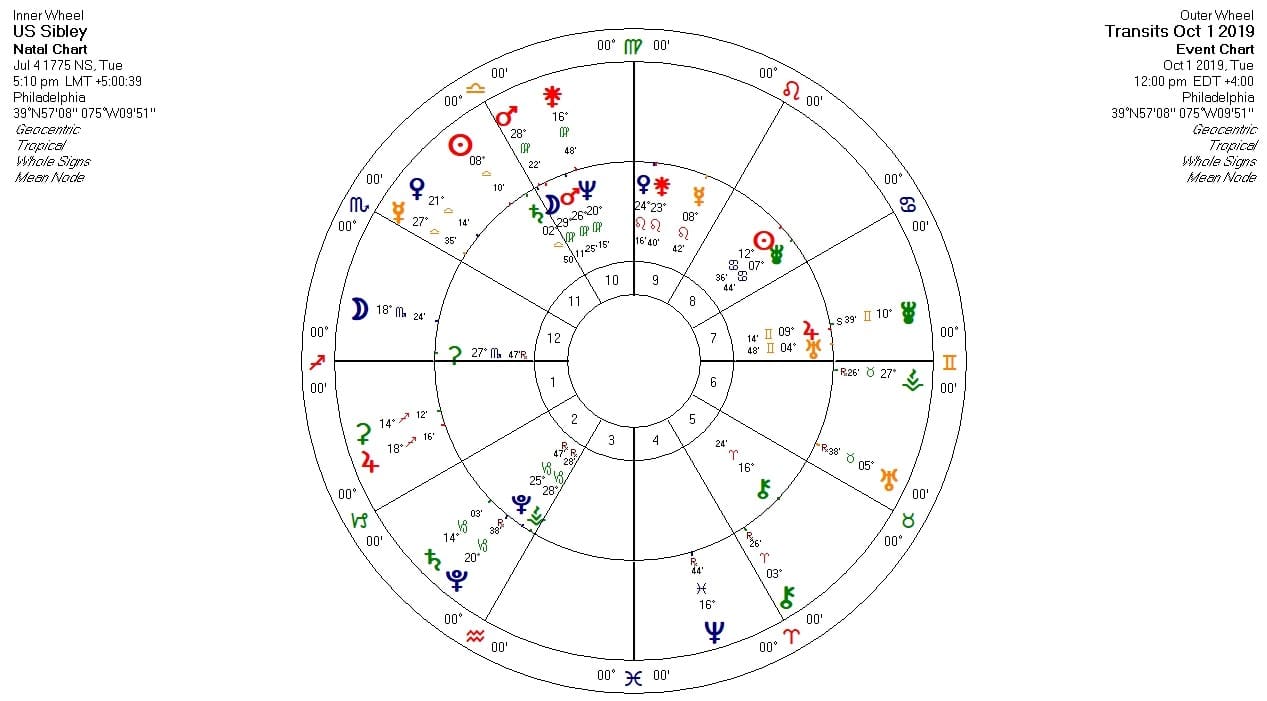 The last time Uranus moved through the 6th House of the United States, it did so between 1934 and 1942.  While the US was going through the Great Depression, the bombing of Pearl Harbor pulled the US fully into World War II and manufacturing exploded with the war effort.  Women were already working in significant numbers in factories by 1942 and over 5 million of them entered the workforce from 1940 to 1945.

There is no doubt that these women working in factories (6th House) represented a radical (Uranus) shift from the women-as-homemakers narrative that preceded both World Wars and still has some traction even today.  In reality, the Uranian impact is always to bring a radical change that reshapes the area of life (House) it is moving through by way of the type of energy of the sign (now and then, Taurus).

Penicillin was discovered and first used as an antibiotic in 1928.  It was most widely used during World War II.  The discovery of penicillin meets the criteria of Uranus in Aries, but its common usage (something new that becomes the norm) occurred while Uranus was moving through Taurus.  Medical breakthroughs are happening as rapidly as the economy is changing, and biotechnology represents one of the fastest-growing and most profitable fields of research and work.

Could we see a cure for cancer while Uranus is moving through Taurus?  Quite possibly.  What about cybernetics and technological implants designed to improve eyesight, hearing, or our other senses.  Science fiction becomes a science.  Since Taurus rules the body, it is not surprising that we could see significant breakthroughs in health care and medicine.

All points have shadow energy and Uranus in Taurus is no different.  Much of Uranus energy is unstable; it is like electricity and it needs a stable conduit to make it work effectively and reliably.  If the conduits are not properly designed or maintained, then “shocks to the system” can easily occur.  Much of what we take for granted (Taurus) is very likely to get a radical overhaul.

In the US, the “unimaginable” would be things such as revoking corporate charters and effectively ending the existence of corporations or eliminating government in favor of corporate rulership, the removal of social security and the “social safety net” of the society or universal health care and free college educations, guns in every classroom or shutting down the gun industry.  Uranus is the very definition of radical.  In Aries, it had its chance to “go for broke”.

Now, with Uranus moving through Taurus, a complete restructuring could take place of the fundamental ways in which US society sees itself functioning in the day-to-day (6th House).  Social Security was created on August 14, 1935, while Uranus was in Taurus (at 5 degrees, and retrograde).  Uranus entered Aries in 1927 and then again in 2011.  The 84 years of change that radically started the reconfiguration of US society in 1927 is underway as of 2011.

The next 8 years will “lay the new foundation”, just as the Great Depression and World War II did previously for the US.  Amazing new inventions and life improvements eventually developed, and we will see similar opportunities in this current transit, but we can expect some potentially radical upheaval to create positive breakthroughs.  Old traditions (Taurus) will need to give way to new ways of living in the world (Uranus).  Citizens of the US will feel this change most ardently, during this transit, in their work, health, and day-to-day lives.