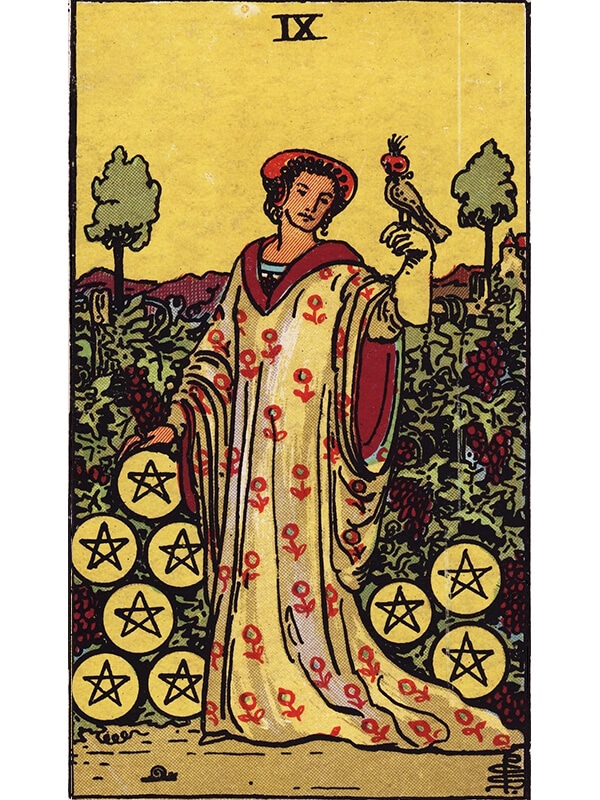 The core meaning of the Nine of Pentacles in a tarot reading is one of confidence and assurance, a kind of mental independence and pride that does not become excessive. In a more modern context, this card also represents female empowerment and independence, marking their own decisions for themselves with enough skill and confidence to leave a mark on their environment. This skillful exercise in a world still dominated by men makes it still especially relevant and effective today.

The main character on the Nine of Pentacles illustration in the Rider-Waite Smith Tarot deck is an obviously wealthy woman in a graceful pose and long flowing robe, with a hooded bird of prey on her left wrist. In the suit of Pentacles, she stands in front of a vineyard, and the nine pentacles are piled up at her feet, six on the left side of the image and the other three on the right.

Her wealth is obvious from her graceful pose, her fancy hat, and her bird of prey (in Medieval times this was a sign of nobility, as only nobles bred and used falcons and other birds of prey on hunting trips). In most colored versions, a flower motif is repeated on the woman’s dress, another obvious sign of wealth.

Like the woman on the picture, the first obvious meaning of the Nine of Pentacles in a tarot drawing is wealth. She clearly is a noble with no obvious resource problems, and this is reflected in the tarot card meaning.

There is something more about her though, a sense of confidence and self-assurance that comes from two important elements: first, long-term safety against financial troubles and woes. Second, a high sense of righteousness and the conviction to be right.

Last, but not least, this is also one of the few cards on the minor arcana, that shows a powerful woman. This noblewoman is carving her own destiny, using traditionally male symbols to show a message of self-sufficiency and financial independence.

When the Nine of Pentacles appears in a love-based reading or spread, the message is quite close to the more generic one. It means that love is within reach for the young woman on the card, but it will be on her own terms.

Just like the financial independence of the main reading analysis, the Nine of Pentacles in a love-based reading denotes the independence and sharp wit of the main character, and a woman who will make her own decisions as regards whom she decides to interact with, and why.

Career encompasses school and education if that is your current stage; work that is necessary, but not what you would consider a career path; and your actual career path. Regardless of your current stage of development, the Nine of Pentacles represents personal, independent success and recognition.

If you are a student and this is your card, then you may have to stand out in some way by working harder than everyone around you. It is individual hard work that will make it possible for your instructors to write glowing letters of recommendation and speak highly of you to others.

If you are doing work that is necessary, but not a career, then you want to be the employee of the week, month, or year. You have what it takes to stand out and achieve at a high level in your job, so make sure you do so. The exceptional person gets most of life’s rewards.

If you are in your career, then the Nine of Pentacles indicates what you have done to stand out and above others, in a positive and lucrative way. You have control of your time and plenty of assets to do what you want without having to consult with anyone else about your choices.

A reversed Nine of Pentacles in a reading has a much different meaning from the upright one. The air of confidence and satisfaction detected on the main character now turns into excessive pride, smugness, and arrogance.

Like so many of the modern social media stars, a reversed Nine of Pentacles represents someone always looking to stand in the spotlight and appearing to be someone they are not in order to draw more praise and attention from the general public.

Finally, in a professional context, a reversed Nine of Pentacles might represent someone too heavily invested in their own work, an upcoming burnout unless something is done about it.

Reversed, this card indicates narcissistic behavior, which damages the relationship daily. You might be the one thinking too much of yourself or the one caught in a constricting web of narcissism from your partner. Either way, financial success should not be an excuse for bad behavior or bludgeon used by the narcissist to keep you down.

When this card appears reversed in a question about school, work, or career, then you need to reign yourself in before the situation does it for you. You are grasping for too much, and the greed is going to cause you real problems at work and in your career. Do not let your ego destroy what you need or want most from work.