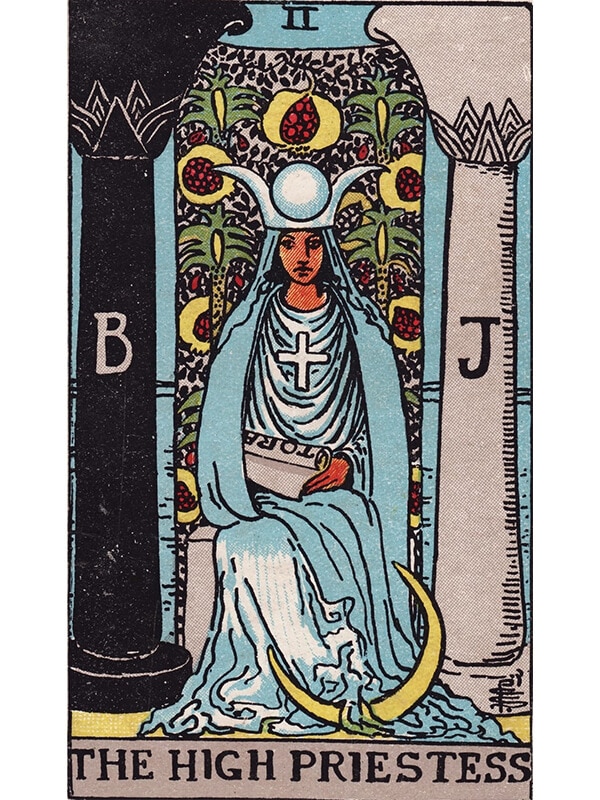 The high priestess tarot card is the first traditionally female character encountered among the major arcana in the tarot. As such, this energy will be found in most readings involving this particular card. Many of the characteristics usually linked with the female gender in tradition can be found in their cooler, softer aspects in this arcanum.

Astrologically, the High Priestess is associated with the Moon.

The main character in the High Priestess card is a woman, usually sitting down on a throne. There are several elements that can be found in most past and modern representations of this major arcana. The Moon will usually be present in some way or another, whether as a symbol found on the priestess’s clothes, or more traditionally either at her feet or on her crown, or both. Her throne can usually be found between a black and a white pillar, representing the twin pillars of the temple of Solomon. Finally, she often holds a book or a scroll in her hands.

In direct opposition with the conscious willpower and drive found in the previous card, the Magician, the meaning of the High Priestess card refers to the unconscious mind and the most spiritual part of your psyche. This is a card that deals with intuition, and generally introspective patterns of behavior.

To understand major arcana meanings derived from this card, you need to be open to understand and welcome a more spiritual, almost magical side of yourself. This is a connection that comes from within but finds its echoes without. It can often underline a strong desire for something that goes beyond purely material things, some urge to find some balance between your rational mind and the sweet, silent whispers of the stars.

This card can also refer to secrets and hidden knowledge, arcane knowledge received about the future, but always in a positive way. This is a source of wisdom, not confusion.

It should also be noted that in some readings, especially among initiatory orders, the High Priestess card could represent the Querent (the person who receives the tarot reading) if that person is female.

The number 02 card of the Major Arcana, the High Priestess, represents knowledge gained from difficult experiences that we have faced and resolved. This card breaks through repeating patterns in a relationship. It is the moment when you finally decide to stop dating narcissists or you realize that you have been trying to fix your broken childhood relationship with a parent through your partner and start dating someone who is not the supposed better version of your unhealthy parent.

If you are single, this card will ask you to understand the lessons being single teaches. What moments of clarity and intuition have you attained through your relationship experiences dating in your search for a lasting romance? Also, what is the High Priestess energy you carry and others carry that you need to integrate to get to the truth, so the two of you can see each other honestly.

If you are in a relationship, this card encourages you to look at the key unfolding moments when something profound about you or your partner was revealed. Peel away one veil and you may find another and another, depending on the experiences of each of you and the time you grew and developed without each other. The High Priestess can also be a mystery in a partnership that gives it sensuality and intrigue; you may not want all the veils removed.

Career encompasses school and education if that is your current stage; work that is necessary, but not what you would consider a career path; and your actual career path. Regardless of your current stage of development, the High Priestess represents the moment when you realize your purpose, find meaningful work, or deeply understand your career path.

If you are a student and this is your card, then you need to assess what you are “really” learning in school, which may or may not have to do with your subject of study and the classes you complete. The High Priestess represents the edges of your experience where you learn social values, emotional growth, and diversity of thought and opinion.

If you are working, but not doing something you would consider a career, then this card will encourage you to wonder about the “point of it all”. Do you know the deep or rich history of your work? Does something you do that is mundane have an extraordinary beginning, or is it the reverse? What has the work you do taught you that is not readily obvious?

If you are in a career path, then this card reveals the need to assess if you feel fulfilled by the work and long-term goals. Are you doing something profound? A career is a journey that builds on itself over time, expands and contracts, and offers a potential legacy for persistent and significant effort. What was the mystery of the work or subject that put you on the long path, and what have you discovered thus far as an intentional contributor to civilization?

The High Priestess tarot card, when reversed, can represent the wild urges of passion, a drive that comes from within for no particular reason, and that is particularly difficult to resist or ignore. It could also represent the downside to any kind of occult or sacred knowledge, the conviction of holding some universal truth that leads you to ignore any argument that would put it into question when spirituality turns into blind faith and dogma and makes you withdrawn instead of open to new ideas and to the outside world.

There is a spiritually damaging aspect of your current relationship and you need to be on guard emotionally. You may already be in the negative experience with the relationship and this card is trying to let you know that you need to get out or get help. You will not be able to overcome the danger or difficulty on your own or by staying in the relationship and “trying to fix it from the inside”. You may have to acknowledge your failings or the failings of your partner as something you cannot fix together. In fact, being together may be exacerbating or causing problems.

When this card appears reversed in a question about work or career, then you want to be on your guard and pay more attention to the behavior of your boss/co-workers and the status of the company. Some difficult situation may be looming or already here. There could be a downturn in the economy affecting your company or a reshuffling of job responsibilities or a new, difficult employee in your group.

Is your resume up-to-date; do you have a contingency plan if you lose your job or have to take a salary cut? Even upright, this card can indicate a difficult experience designed to teach a spiritual lesson; reversed, this is doubly true.

The Fool meets the High Priestess at the same time as he meets the Magician on his spiritual quest, like two sides of the same coin, highlighting the main duality that can be found in the world, male and female, night and day, black and white, etc. The High Priestess connects the Fool to his unconscious mind, where she plants the seeds of sacred wisdom that will grow alongside him on his way.

As such, the high priestess tarot card can be read as a key to unlock the hidden potential found deep within anyone’s mind, a promise to let this deeper connection to the universe grow if it is nurtured instead of ignored.

The traditional interpretation of this major arcana card has evolved a lot over the course of the last century. In Medieval times, the High Priestess could often be considered the “negative” side of the Magician, a bad influence, a slight on pure reason. This is probably due to the traditional role of a woman in Medieval times, especially as seen through the eyes of men, who were the vast majority of scholars studying the tarot and the occult sciences. Since the end of the nineteenth century and wider inclusion of women among initiatory societies and tarot reading studies, the neutral and positive aspects of this major arcanum were unveiled and brought forth in a more objective manner.

Meditating with the High Priestess

With a strong emphasis on introspection and listening to your inner voice, the high priestess tarot card is probably the best kind of tarot-related meditation you might choose. The feminine energies of wisdom and spirituality will help you reach an altered state of consciousness where you will be in sync with your inner self, better able to understand and listen to the various messages that your subconscious is trying to send you.

In a stark contrast to some of the more “quiet” kinds of meditation, when you focus your mind on the high priestess tarot card it is not to let go or clear your mind of every thought, but rather to reconnect to your inner self and discover the wealth of wisdom and advice that can be found deep within.