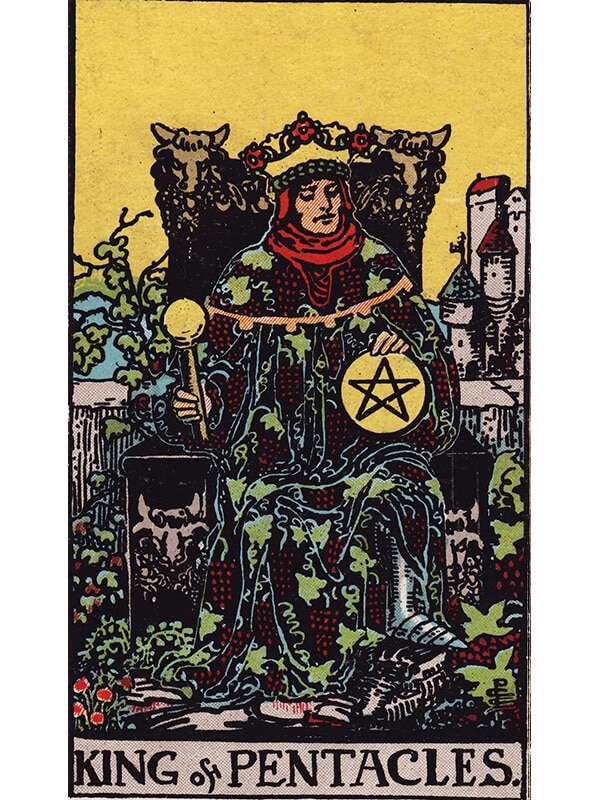 The ultimate incarnation of a successful professional career, the King of Pentacles embodies stability, power, and material wealth. As such, the upsides and downsides that come with this minor arcana card in a tarot reading are easy to see and understand. While the King of Pentacles brings a certain peace of mind, safe from need and want, the predictable and somehow archaic trappings of this patriarchal stereotype can seem dated and out of place in the modern world.

Just like the queen before him, the King of Pentacles illustration in the traditional Rider Waite Smith tarot deck is extremely dense, full of details and symbols that are both connected to nature and the element of earth (grapes, vines, flowers, animals) or prosperity (a golden scepter, a big castle in the background).

The king of the suit of Pentacles is sitting on an elaborate throne decorated with bull’s heads, a very common element to symbolize wealth and affluence. His head is held high in confidence and power. His left foot slips away from his robes, armored up, and rests on something that could be a boar’s head or a tortoise, representing his mastery over the concept of sturdiness and determination.

Where the Queen represented affluence in a nurturing, protecting aspect, here the King of Pentacles represents the ultimate achievement of this state of affluence, the one that does not need to be nurtured and protected anymore. This echoes the archetype of the self-made man atop his empire of power and wealth.

This is extremely positive in a business context, usually, a sign of a fruitful deal or project, or might represent a new contact with a lot of power and influence, a solid partner that will not let you down.

Last, but not least, just like the Emperor major arcana card, the King of Pentacles in the minor arcana, represents the values of discipline and order, the kind of firm but effective leadership that can be at the helm of any successful venture and drives it to even greater heights.

The King of Pentacles often represents a rich (or at least financially comfortable) middle-aged man, with a conservative streak and a careful and slow demeanor. He embodies the archetype of the suburban family man, with a successful job and career, and enjoying the comforts of wealth and luxury.

Drawing an upright King of Pentacles in a tarot spread focusing on love might refer to one such person in the Querent’s life, or it might be a sign of suburban, quiet family life, something stable and comforting, even if it might easily fall into some kind of routine that might turn into an obstacle to overcome later on in life. Comfort and routine can dull the flames of passion faster than any disagreement or heated argument would.

Career encompasses school and education if that is your current stage; work that is necessary, but not what you would consider a career path; and your actual career path. Regardless of your current stage of development, the King of Pentacles represents the highest achievement and status through your efforts.

If you are a student and this is your card, then you want to set your goal to become a king in your field of expertise. Also, you will want to study under the professors who most resemble this card in their accomplishments and guidance.

If you are doing work that is necessary, but not a career, then you are looking to work for this kind of boss. His or her success will allow you to have a fruitful work opportunity. If you are not pursuing a career, then this will be the hardest employer to work for, but one who can help you be successful.

If you are in your career, then the King of Pentacles represents your role as the ultimate, successful leader. The “buck” should stop with you. You want to be the leader in your field and you want to be able to measure your success in terms of monetary gain and dominance through success.

A reversed King of Pentacles in a reading is also related to wealth and power but focuses more on the ultimately toxic relationship that some people nurture with this concept when lust for power and material gains turn into an obsession.

The King of Pentacles can be extremely stubborn in his views, refusing to even consider the slightest alterations to his initially designed course.

Combined with other deceptive or negative cards in a tarot spread, a reversed King of Pentacles could be a warning about someone’s corruption, accepting bribes or material gains to extend their power and influence in a way that does not benefit the common good. In extreme cases, it could highlight all the awful things someone would be ready and willing to do for personal gain.

Reversed, this card indicates a domineering person, who uses his or her power to control the relationship. If you are behaving this way, you invite very negative karma into your soul path. If you are under the thumb of such a person, you need to do all you can to escape and find safety.

When this card appears reversed in a question about school, work, or career, then you may be dealing with someone who thinks the end justifies the means. This person will be ruthless and uncaring, and you should be very much on your guard. As the saying goes, “do not bring a knife to a gunfight”.

<< Go to the previous card (Queen of Pentacles)