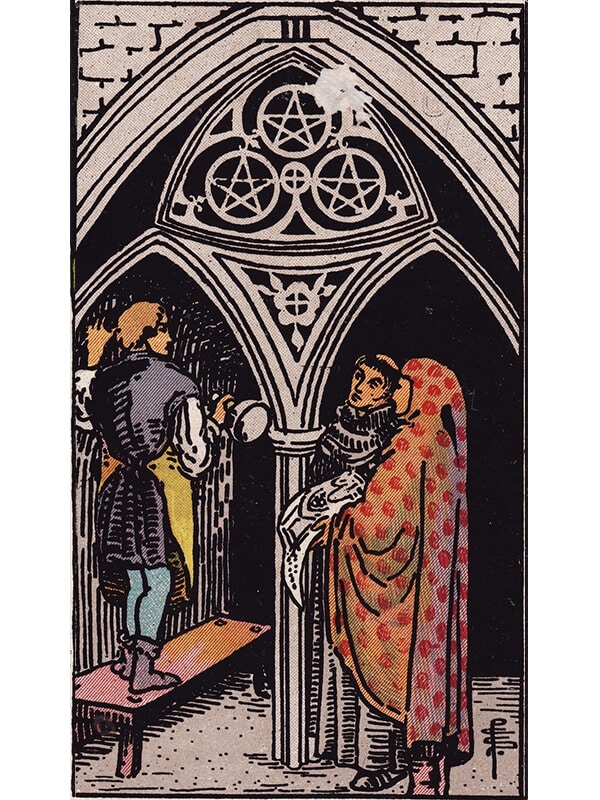 Reversed: tress, exhaustion, and too many commitments in too little time

The Three of Pentacles represents a desire to build something that will stand the test of time, something larger than what the Querent or subject of the reading might achieve on their own. As such, it highlights the benefits of teamwork, and of several skilled people working together towards a common goal.

All should keep in mind that every single member of the team is essential to the overall dynamics of the project and that together they are greater than the sum of their parts.

The Three of Pentacles in the RWS tarot deck illustrates a scene happening in a church or cathedral, as evidenced by the classic architecture of the columns and archways, one of them bearing the three pentacles of the suit as if they were a stained-glass picture or a bas-relief.

The main character seems to be a sculptor at work on the left side of the picture. He is currently receiving advice or instructions from the two other characters, one in a flamboyant outfit, and the other obviously a priest or abbot.

Within the suit of Pentacles, the core meaning of the Three of Pentacles echoes what happens in the scene, highlighting the power of teamwork when working towards a common goal. What is important to notice is that the three characters on the minor arcana card all seem to bring something different to the mix: the sculptor brings his craft, the priest brings his vision, and the third character, with plans in his hands, seems to be an architect offering suggestions on how to bring it all together.

The Three of Pentacles is also a card of learning, and of fruitful collaboration. This usually refers to the first steps in a collaborative plan, once the final goal has been set and a reasonable plan to reach it has been designed and agreed upon by the various members of the team.

There is also a dimension of learning to be found in the Three of Pentacles, as each member of the team will probably learn and grow from shared experience with the other members who all provide specific areas of expertise to the project.

When the Three of Pentacles is drawn in a love-related reading or spread, usually it does not really focus on the feelings or the relationship itself, but rather on what the partners can achieve together. It might represent a couple working on improving their home, or a romantic connection extending to the professional domain, like a couple working together in the same company, or even building their own company together.

Unless the card was drawn reversed in the spread, this is usually a rather positive card to find in a tarot reading and, as such, tends to imply that any professional collaboration would probably be successful or profitable for everyone.

Career encompasses school and education if that is your current stage; work that is necessary, but not what you would consider a career path; and your actual career path. Regardless of your current stage of development, the Three of Pentacles represents the hard work necessary to reach your goals.

If you are a student and this is your card, then you need to be willing and able to put the necessary time in to get the best grades possible. Effort is necessary now, and a lot of school is about getting the work done well, on-time, and without complaining.

If you are doing work that is necessary, but not a career, then you want to make sure you are doing the work efficiently and effectively. The longest distance between two points (the beginning and the end) is a short cut. Do your work the right way and you will be rewarded.

If you are in your career, then the Three of Pentacles reminds you that much of real, high-level success is built on the best work ethic, rigorously applied, and properly executed. The most successful people in the world work smart AND hard.

All the focus and harmony brought by teamwork in the upright meaning of the Three of Pentacles are broken down when this minor arcana card appears reversed in a reading. It usually represents someone working alone while clearly unable to perform a specific task on his or her own.

It could also represent a surge of disharmony rising within a team. In that case, the other cards drawn in the spread will usually point out the source of the problem, and a potential way to deal with it before it festers and puts an end to the actual collaboration. Combined with one of the court cards in any suit, it might draw attention to one element of the team not pulling their weight and dragging the rest of the team down with them.

When this card appears reversed in a question about school, work, or career, then you need to step up your game. Reversed, the card indicates that your efforts are not yielding or going to yield the results you want. If you are working hard and the results are not there, then you might need to start looking for another job.