Is Reiki a Kind of Science or Spirituality?

Home » Blog » Personal Growth » Is Reiki a Kind of Science or Spirituality? 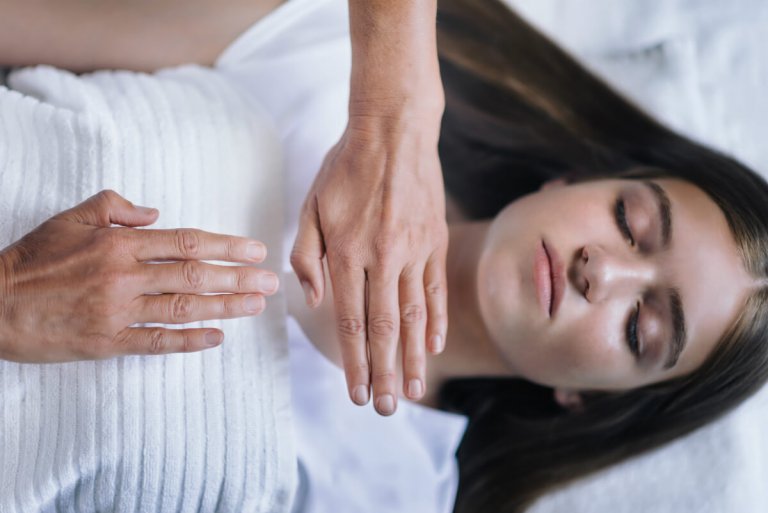 Like several spiritual healing practices, people wonder if Reiki is a kind of spirituality or science or both. And regardless of the answer, they wonder if this is an effective practice…

Several studies have been undertaken throughout the world about the effects of Reiki on the body and mind. They all attest how effective it can be in several domains in order to improve general physical and psychological well-being. By the end of this article, you will be able to decide for yourself if Reiki is a kind of spirituality or science!

There are so many different Reiki paths, sometimes with widely different values and practices, that it can be hard to have an opinion on each and every one of them. Especially when many so-called Reiki paths arguably have nothing to do with genuine Reiki practices. This is why we shall focus on Reiki Usui, named after its founder Mikao Usui, because it is the Reiki path considered to be the most genuine.

Reiki is a spiritual healing technique relying on laying of hands, but also on relaxation and meditation, which is why the technique used in Reiki is called meditative touch.

Usually, the patient will lie down during a Reiki session, often without speaking, and the practitioner will hover their hands on specific locations of the patient’s body.

The two protagonists usually enter a state of meditation and relaxation triggered by the practitioner, leading the patient onto a higher state of consciousness that makes it easier for them to eliminate their own blocks.

With that said, we still need to determine whether Reiki is simply a kind of spirituality, a science, or both! That is the question!

Indeed, a spiritual path is a kind of link or connection to a higher power, which you may call God, supreme being, Buddha, universal energy… depending on your beliefs. It should also be noted that even if you do not have any affinity with eastern religions, this is not an issue that should keep you away from Reiki practice or training, because it is a discipline that transcends its own differences.

You can give this higher power any name that you want according to your beliefs, but it represents a higher and ultimate form of consciousness with unlimited power, the source of all life on earth.

Spiritual practices let you connect to this higher power through several means depending on traditions and religions: through prayer, fasting, meditation, ascetic prayers, hallucinogenic substances… Through this subtle contact, you can acquire the intellectual and physical means to make your dreams come true and lead the kind of life you’ve always wanted.

At first glance, science seems like the straight opposite of a spiritual path. It must rely on concrete facts that can be reproduced and need to provide measurable and similar results from one experience to the next, every single time.

Well, Reiki stands at the crossroads. Indeed, Reiki can be called a spiritual healing path.

In context, this is a spiritual practice that can help with healing even if the main goal is not to heal and cure illness like conventional medicine. Indeed, Reiki operates on the inner blocks of a person, making it possible to untangle psychological knots. This often leads to a cure for afflictions and physical illnesses.

A cause and effect connection can thus be drawn between the removal of psychological knots and the disappearance of physical problems. Additionally, Reiki sessions – through meditative touch – always make it possible to notice how removing psychological blocks often leads to relief or remission for illnesses and physical pain. It should nonetheless be kept in mind that traditional Reiki is not any kind of medicine, even in an unconventional way.

According to the principles of traditional Reiki, a practitioner of this kind of spiritual healing indeed cannot diagnose an illness or cure it in the traditional way medicine is understood in the west.

Spirituality and healing art at the same time!

Even if medicine can be called a healing art, it is nevertheless based on specific rules to diagnose a problem and set a protocol for a cure.

Traditional medicine only aims to solve physical illnesses, often without taking the psychological side of the affliction into account, even if a western medical practice is currently evolving in the right direction.

This philosophy that unites the body and mind has been established for millennia in Asia, and it found a new resonance in the West since the discovery of psychosomatic illnesses in the 20th century.

According to western medical philosophy, the word “psychosomatic” applies to physical afflictions triggered or worsened by psychological factors. It is also called somatization.

In such cases, it is said that the body is reacting psychosomatically, in other words, that the mind is manifesting its misery through physical troubles. Well, this western medical philosophy absolutely matches everything advised in eastern medicine and therapies.

So, it can be said that Usui Reiki is a kind of spiritual healing triggering a state of well-being in individual people according to a scientific procedure. Indeed, the Reiki practitioner uses a specific technique, meditative touch, which can be considered as a kind of laying of hands, as practiced in several hand-based therapies for millennia all over the world!

Additionally, Reiki relies on a set of beliefs inspired by Buddhism, most notably the existence of universal energy running through the universe and called Ki (Chi in Chinese medical philosophy) even if some Reiki school have a slightly different vision for it.

When this energy (or Ki) is running through your body in harmony, you are in good health. When Ki is blocked or has trouble running through the human body, this can trigger physical problems (illnesses) or psychological imbalances (anxiety, fear, negative emotions…)

On the other hand, physical problems and psychological imbalances can also trigger a block or disturb the flow of Ki through your body.

Restoring the balance of Ki

A Reiki-certified professional practitioner – or someone trained in this form of spiritual healing – will strive to restore the balance of Ki within a body, leading to positive effects on that body but also on the mind of the person targeted by these Reiki sessions.

During the Reiki session, through the use of meditation and relaxation, the practitioner will trigger a phenomenon called meditative resonance that can trigger the removal of psychological blocks without any specific action from the target, not even needing to talk and describe their misery or their problems.

A scientific approach is the most pragmatic way to prove that the same causes trigger the same effects every time the experiment is reproduced, regardless of the subject person’s beliefs. So, no matter how many times you try a bring some water to a boil, it will boil once it reaches 212°F. Likewise, it will always freeze at 32°F! Whether you like it or not, this is a proven fact.

Conversely, a belief is an opinion expressing a conception of life that cannot always be proven, like the existence of God. This cannot be proven through science, but no experiment can prove the opposite either. You either believe or you don’t!

Likewise, you can believe in extrasensory perceptions or extraordinary abilities for some people who can trigger phenomena or display powers considered to be impossible or unproven by science. This is how it goes for faith healers, seers, psychics, prophets, spiritual healers… and abilities like reading the future, astral travel, being in several places at the same time, remote healing, or reading someone’s thoughts…

Reiki provides concrete results that can be reproduced!

Any results provided through Reiki practice are genuine and can be reproduced at will through meditative touch!

Furthermore, Reiki practice does not rely on awakening extraordinary gifts, but on the mastery of tried and true techniques used for nearly two hundred years, since Reiki was created by its founder Mikao Usui (1865 – 1926).

Reiki can thus be considered to be a kind of spiritual healing and science because it relies on a set of specific rules and techniques that yields notable results that can be reproduced! Additionally, Reiki uses relaxation and meditation, two practices with benefits on the body and mind that have been proven through several research experiments and scientific studies.

Relaxation and meditation have been considered for decades as techniques that can get rid of your psychological obstacles and, as a consequence, provide positive effects on your body, your immune system, your cardiovascular system, the way your brain works, and the overall length of your life.

The benefits of meditation on the human mind to get rid of negative emotions, express positive emotions, and unearth dormant or hidden abilities have likewise been proven by neurosciences.

Laying of hands: a key element of Reiki!

Laying of hands is at the core of any Reiki therapy. Laying a hand on a painful location is also often your first reflex whenever you feel pain.

This reflex is sometimes an unconscious leftover of your often forgotten power of self-healing!

Have you ever instinctively put your hand on a painful part of your body?

You might even have noticed some tangible relief from that physical suffering after a little while!

If you haven’t done it so far, just try it next time you feel a little pain or get a flesh wound.

Do it with a strong motivation to annihilate the pain, and you will most likely be pleasantly surprised.

In most cases, if you genuinely believe in your own laying of hands healing power, you will notice that the pain, rash, or bruise will disappear, or at the very least significantly lose potency…

We all have this power, but we never use it because we do not know that we have it, or do not know how to use it… or we simply rush to a pharmacist or physician!

Reiki: a science-based way to restore your healing power

Practicing Reiki, or calling on a Reiki practitioner, will allow you to discover or recover the mighty power of inner spiritual healing. Indeed, simply laying your hands on a painful spot will not always be enough to overcome an illness if you do it without proper training.

Reiki can let you quickly tap into your inner power of psychic and physical healing support through a reliable technique with science-proven effects! This is how you will get intimate with the Ki, the universal life energy constantly running through your body and mind. Indeed, the harmonization of that inner energy is the only thing that will allow you to let the Ki energy flow in harmony within you.

You will then be lucky enough to be constantly in great shape, to use all your personal abilities, to prevent illnesses or quickly recover your health when you are sick.

In short, Reiki can be considered as a kind of spiritual path and as a science called optimum spiritual healing, in order to reach a balance between your body and mind.