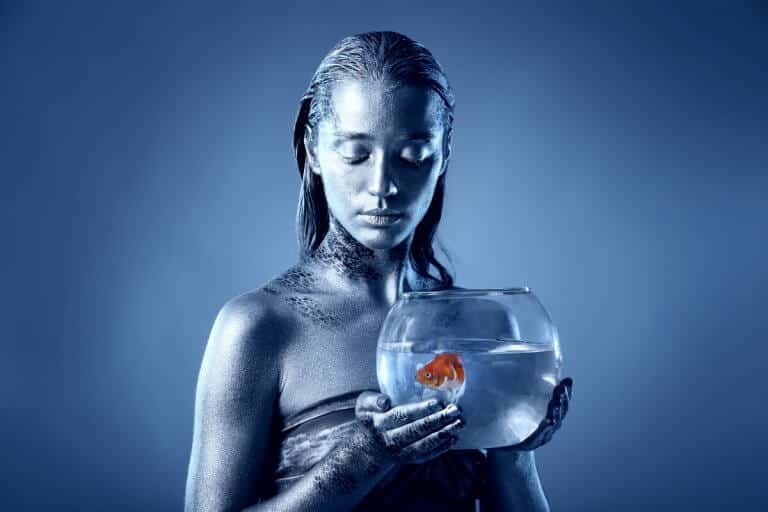 Most of us know our zodiac or sun sign, but what does it look like in the night sky, and what’s the story behind it? This month it’s the turn of Pisces the Heavenly Fishes…

In the sky, Pisces is represented as two fish swimming at right angles to each other, one to the north and one to the west and attached by a cord.

Pisces, named for the Latin plural of fish is the 14th largest constellation overall. Pisces is in the first quadrant of the Northern Hemisphere and covers a large V-shaped region. While it is a fairly large constellation, its stars are faint — none are brighter than the fourth magnitude — making it challenging to see in the sky with the naked eye.

Even so, its brightest star, Eta Piscium, also known as Alpherg or Kullat Nunu, is a bright giant star (G class) 294 light-years from Earth and has a luminosity 316 times greater that of the sun. Kullat Nunu is its Babylonian name. ‘Nunu’ means ‘fish’ and ‘kullat’ is a bucket.

Pisces’ second brightest star is a yellow giant about 130 light-years from Earth known as Gamma Piscium.

Alpha Piscium is the third brightest star in Pisces and is made up of a pair of white dwarf stars in close proximity. Its other name is Alrescha (“the cord.”) It lights the spot where it appears that the tails of the two fish are joined or tied together.

The best time to see Pisces in the Northern Hemisphere is between 6-9 November at 9 PM below the Square of Pegasus.

Pisces is notable for containing the point at which the sun crosses the celestial equator into the Northern Hemisphere around March 20 each year.

Astronomer and author Ian Ridpath explains: A cord joins the tails of Pisces. The horizontal dashed line passing through the southerly fish is the celestial equator, and the diagonal dashed line is the Sun’s annual path, the ecliptic.

The point where they cross is known as the vernal (spring) equinox.

The fish of Pisces are attached by a cord of stars, just as life and death, and winter and spring are conjoined and cannot be separated.

Pisces is a mutable sign. These are the signs that mark the end of a season; the other mutable signs are Gemini and Sagittarius. Pisces marks the end of winter, leading up to the vernal equinox. Of all the zodiac signs, mutable signs are traditionally the most flexible and adaptable, the ones most at ease with endings and transitions and change.

Winter often brings mourning, as it carries away the frail and the old.

Psychic Pisces straddles the season of that winter’s grief and the new green shoots of spring.

The sign of Pisces is Babylonian in origin. Enki, the Sumerian god of wisdom and the alleged true father of mankind, is associated with the planet Neptune, which astrologically rules the sign of Pisces.

To the ancient Greeks, the fish themselves were the goddess Aphrodite and her son, Eros. They were walking by the Euphrates one day when a terrible monster, Typhon, suddenly rose up out of the water to destroy them.

The gods of Olympus were no match for this particular very ancient monster, a son of Gaia, or Earth herself. He was as tall as the heavens and his eyes shot flames. Instead of fingers, he had 100 dragon’s heads sprouting from his hands.

None of the Olympians had the power to destroy Typhon, or confront him, not alone. For a time, all they could do was flee, which they often did by transforming themselves into animals, and Aphrodite and Eros, in this case, transformed themselves into fish and swam away.

Another version of the story says they dived into the river, and were rescued by two friendly fish that carried them to safety, and were later placed in the sky, their tails intertwined, to commemorate the day when Eros (Love) and Aphrodite (Beauty) were saved.

Ultimately, Zeus imprisoned the terrible Typhon beneath Mount Etna…and he is still alive down there.

There is no such thing in reality as THE Pisces personality and the same goes for all the zodiac sun signs. Your sun sign is an archetype, a keynote but of course, it is not and never could be the whole story.

Pisces combine imagination with determination, charm with depth, and at times there is a certain passivity, even inertia, which may actually serve them very well at times, but may in some cases degenerate into a trap or a kind of darkness involving depression, alcohol or another substance misuse.

These individuals are talented, natural artists or musicians. They are famously loyal once committed, compassionate and sensitive.

They adapt with ease, are spontaneous and full of surprises, while their steel may be hidden, but all the same, it is there, and not much is ever said about this Piscean steel. Pisces can be tough in a quiet way. They may not say much, but watch their face harden, and, cross the line once too often, you are gone.

Their instincts are kind and they have a soft spot for the underdog. Where they demonstrate a lack of proper consideration for others or undue stubbornness, it is not due to any lack of goodwill, but because they are not paying attention, too focused on their inner preoccupations.

Pisces needs variety, and structure must allow them room for a degree of autonomy. Many police officers, arbitrators, and judges are born under Pisces, as well as artists and musicians. Administrative work, although Pisces can do it, is really not their sort of thing by and large.

Pisces can make excellent and approachable leaders of small teams, loyal to their staff. They will take on injustice, take on those superior in status, but Pisces, unlike, say Aquarius, confines their remit to action on an individual basis. Pisces are not temperamentally disposed to mount group actions, campaigns or crusades unless perhaps, they are early Pisces, born on the Aquarius cusp, but the later subjects of this sign, born close to the Aries cusp, are very much the ‘doers’ of Pisces.

Pisces is as brave as kind and quick and instinctive, but their physical energy must be guarded. It can be erratic, and once depleted, is not always easily restored. If they are prone to headaches at the back of the head, there may be related bladder infections or other issues. Pisces needs rest, music and relaxation time near to rivers, ponds, and sea.

Weaknesses – Depending on other planetary placements, Pisces may be prone to falling prey to either wishful thinking or gloom or unhealthy lifestyle habits, struggling to recover and regroup from setbacks. Without enough to do, without a sense of purpose or direction, Pisces can drift loose from their cord, becoming detached and living too much in their own imaginary world.

Join us next month for the legends of Aries, the Fiery Ram…