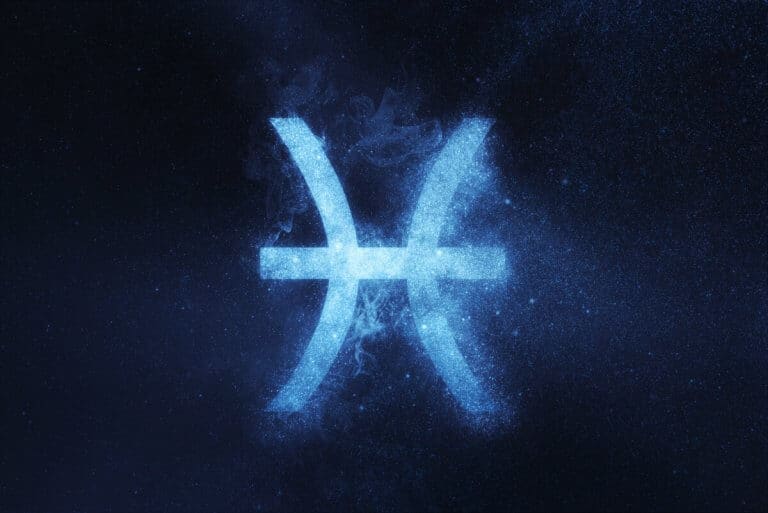 Pisces is the twelfth and last sign of the zodiac. It is said that Pisces is a combination of all the signs that went before them, so each Pisces is a unique mixture of the zodiac. Pisces is concerned with compassion, sympathy, love, and altruism. They are related to dreams, the psychic, clairvoyance, sixth senses, illusion, magic, film, fantasy, make-believe, art drama, music, poetry, prose, dance, unusual talent, memory, wisdom, versatility, sensitivity, intuition, humor, satire, secrets, fulfillment of life and eternity.

Qualities of the Element

Pisces is a mutable water sign, which means there are many variations. No two fish are ever completely alike. Mutable means changeable and water can alter its form in multiple ways: rain, hail, snow, mist, frost, clouds, rainbows, warm pools, and puddles. This means that Piscean feelings are prone to change many times a day.

The Effects of Pisces’ Ruling Planet

Pisces is ruled by planets, Neptune and Jupiter. Anyone with a strong Pisces influence in their chart will bring benefit to others through sensitivity. Jupiter is the planet of expansion, optimism, and generosity, which could explain why a lot of Fish are very giving creatures. Neptune is the planet of dreams, sensitivity, the unconscious and the world of unreality. Pisces may have an intuition about things, they can go deep and feel connected in other realms of life.

Spiritual Goal of the Pisces

To acquire the meaning of peace through service to others.

Below are some general personality traits which are found in people who are typical of Pisces. A frustrated or troubled Pisces may display some of the unattractive traits.

If you have a strong sense of Pisces in, you have the most extreme choices of any other sign. Pisces is able to accept the challenges of life and rise to the top. Or they can give in to the easy way of oblivion and fall to the bottom. This choice is symbolized by the two fishes, which also illustrate Pisces as having one foot in the real world and one foot in the dream world. To help one swim to the top, Pisces need to find peace through beauty, music, and harmony. Pisces need work which will allow them to achieve this. Unlike other signs, Pisces has many talents that can be utilized to further develop their character. A lot of Pisces work hard to improve a lot of humanity. Other Fish stretch their talents in film and entertainment. Pisces needs to churn their private, mystical dream world of love and compassion into a reality. The only other option for Pisces is a life of illusions and a sense of failure.

Pisces will need to feel loved in their home environment. Home must contain people that Pisces is drawn to emotionally and who love Pisces.

When at home, Pisces will often enter a fantasy world. They will feel safe to explore their imagination. Pisces will probably not have a fixed routine. They are likely to be untidy though they may be pressed by the sudden need to clean everything to avoid confusion—this can happen at any time. Pisces will need space for personal privacy. They will make the home into a lovely world of art, music, design, good food, and good wine.

Pisces can happily accommodate all the fantasies of childhood. They will give children plenty of imaginative freedom. They may lack discipline but will listen with understanding. They will encourage personal development. They may have to teach their child punctuality. Pisces will be warm and loving and rarely will use bad words. They may tend to spoil the child. They will probably have a personal and unusual set of rules that the children must abide by.

Pisces is rarely in an Executive position and doesn’t like a team devoted to a strict routine. Pisces enjoys work that offers freedom of expression. This often results in Pisces working alone or in a self-directed position. In a team setting, Pisces likes constant change and adaptations.

Would like to be seen more of a director than a boss. They will serve people rather than accumulate power and use their gifts to make the correct move. Pisces is a serious judge of character. They are unconventional and creative and values people who are conventional, well organized because they are needed to back up Pisces’ ideas. Pisces as a boss will never refuse to help someone in need. They may put up a tough front to hide their deep belief in the mystical.

The Fish in Love

For Pisces, there isn’t a difference between love, affection, and romance. Pisces needs all three. Pisces needs to feel loved and without love, their lives seem grey.

A typical Pisces is romantic, eager to please and adjusts to the demands of the relationship. They can appear helpless, delicate and venerable but love lets Pisces deal with a variety of troubles and tragedies. Pisces is very emotionally involved to the point where they won’t know if they are being treated poorly or deceived.

What does Pisces Want in Love?

Pisces expects to have their dreams valued. They wish to be protected from harsh criticism. They want to be cared for romantically. They want to have children, and to be constantly reassured that they are loved. They want to celebrate special days and for birthdays and anniversaries to be remembered.

Fish Falling Out of Love

Some Fish tend to drift into another relationship but are surprised when they are accused of unfaithfulness. The self-doubt that can haunt Pisces can only be calmed by repeated reassurance that they are loved. Other times, Pisces might just leave the relationship for no definitive reason and with no regret. It is not that Pisces does not love the abandoned partner anymore. On the flip, Pisces will often show sympathetic understanding and will try to keep a friendly relationship with the one that they’ve left.

Worst-case scenario, Pisces is rejected by the one that they love. Ending a relationship with a Pisces will be hard to do. Pisces will cling, convinced that if they change in some way that everything will be alright. It may take some extraction to get away from the emotional mess Pisces can produce.