The Numerology of the Number 6 in Tarot

Home » Blog » Tarot » The Numerology of the Number 6 in Tarot 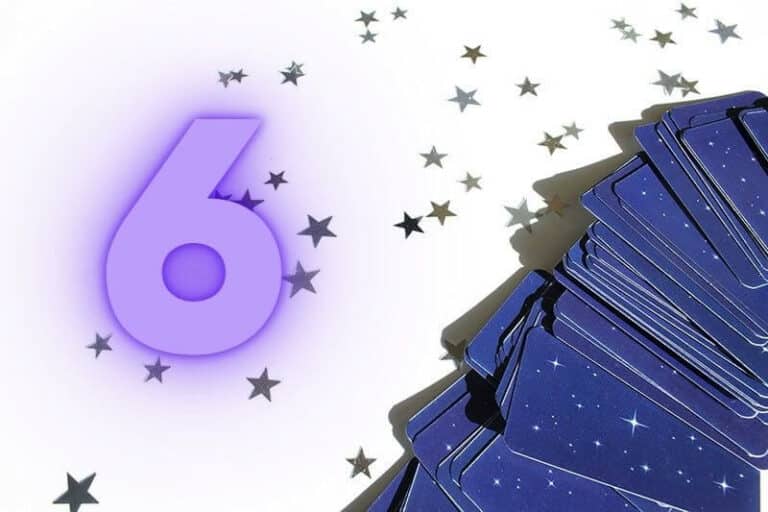 This article will explore the cards of the tarot that represent the number 6.

Six Cards Represent the Number 6 in a Tarot Deck

An individual that has life path number six is nurturing and supportive. Therefore, they have the passion and energy to help others, support their community, and teach. Their personality develops through their efforts to learn about the world by being of service to others.

As service people, they embrace compassion, empathy, and attentiveness. So, they become successful through the support of others as matter of course and in times of need. Since they serve to succeed in life, they overcome challenges thrown in their way by helping people who can overcome their challenges and aiding others in times of need.

Each number 6 tarot card exhibits some aspect of this energy.

The Lovers card focuses on intimate relationships, and the vulnerability we face when we share ourselves with someone romantically. Committing ourselves to another person, sharing resources, and allowing ourselves to explore intimacy is fundamental to our life journey. The Fool learns about himself or herself through and with another person who is not a teacher, but rather a companion.

Astrologically, the Devil card is associated with the planet Saturn and the sign of Capricorn.

The Devil shows our carnal connection to the world, representing the influence of primal urges and instinct over reason. While it can be helpful to be reminded of one’s own nature, it can also feel frustrating or leave you in a place where you feel trapped and powerless against these urges. The Devil teaches and reminds the Fool that the earthly journey contains many temptations and one must accept responsibility for one’s choices.

Reversed: living in the past, apathy, lack of motivation, and out of touch with the real world

A boy and a girl are usually depicted on the Six of Cups minor arcana, and in most versions of tarot deck illustrations, they are both very young, probably under ten. They are standing next to a series of cups and chalices that have been refilled with flowers instead of any liquid. The boy and girl are facing one another and seem to be halfway through a conversation that catches their full attention.

The emotions conveyed by the suit of Cups are now deeply tainted with nostalgia but in a good way. Through basic daydreaming, the Querent can get reconnected with their inner child, channeling its essence in order to restore the candid innocence that used to be theirs.

Just like the two young children in the illustration, the Querent can experience the joy of simple pleasures and boundless affection, doing something for someone without feeling the need to receive anything in return.

Reversed: cupidity, greed, selfishness, and refusal to help someone in need

The usual illustration of the Six of Pentacles in a tarot deck (like the Rider-Waite or similar fully illustrated tarot decks) usually comes as contrast and solution to the previous card in the suit of Pentacles. The main character is an obviously wealthy noble or merchant offering alms to the poor, represented by two homeless people.

The wealthy character carries a pair of scales in his left hand, echoing a message of justice and righteousness.

Like the scene displayed on this minor arcana card, the Six of Pentacles usually appears in a tarot spread or reading when a notion of charity or generosity needs to be conveyed. The other cards in the reading will usually provide enough clues to determine what this instance of charity refers to, or who might need financial or material support in the Querent’s life.

By broadening the core meaning of an upright Six of Pentacles in a reading, this minor arcana card could also refer to a gift, either offered by or given to the Querent or subject of the reading.

If the subject of the reading is particularly rich or in a comfortable material situation, the scales of justice on this card might be seen as an incentive to give away part of their assets and help those in need.

Reversed: resistance to change, worsening situation, and a price too high to pay

The RWS version of the Six of Swords is another scene viewed from the back (which is particularly appropriate here when you consider the Six of Swords meaning). You see a ferryman on a lake or river, carrying two people in his boat. The six swords are all planted on the boat, but it doesn’t seem to be leaking.

It is interesting to note that the ferryman is the focus of the scene, but his tool is a large staff and not a sword, as usually most main characters are somehow using the object of their suit. As mentioned above, the scene is perceived from the back, so the boat and passengers are moving away from us.

Traditionally, this journey differs from the one encountered in the Chariot card, for instance, in that the goal is not necessarily to move to a better position or come as a victor after a challenge, but rather to move to safety, find better shelter, and move from one shore of struggle to another shore promising more safety and security.

The journey might also be figurative, and in that way might represent someone deliberately changing their point of view or position, letting go of what used to be important beliefs or values to grow and change as a person, like a rite of passage where you learn to see the world through a different perspective.

The man displayed on the Rider-Smith-Waite tarot deck for the suit of wands (and in many other decks since) represents a young man on horseback. He wears a laurel crown on his head, with another one hanging from the staff he holds in his right hand. Footmen and soldiers on his side hold the other five “wands” in the illustration.

This can either represent a knight coming back victorious from battle (or a tournament), or an official messenger bearing news of some sort.

The main meaning of the Six of Wands is victory. This card refers to a positive outcome to a challenge, project, or situation that was the focus of the reading. Just like the knight in the picture with his head held high, this card also represents pride and personal achievements.