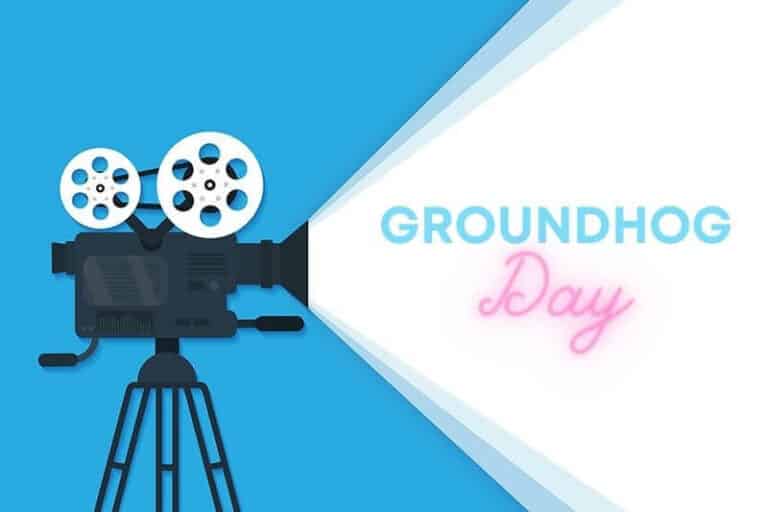 This 1993 comedy starring Bill Murray and Andie MacDowell might seem like an odd choice for a spiritual movie, but it provides one of the best representations of the essential philosophy of reincarnation.  The lead character, played by Bill Murray, ends up stuck in a time loop, which has him repeating the same day until he figures out how to get out of the loop.

“Murray portrays Phil Connors, a cynical television weatherman covering the annual Groundhog Day event in Punxsutawney, Pennsylvania, who becomes trapped in a time loop forcing him to relive February 2 repeatedly” (wiki).  Once he becomes aware that he is caught in the time loop numerous pathways emerge as he tries to figure out how to get out of the loop.

After the disbelief, and then the panic, subside, maybe 10 or 20 days into the loop, the character enters a hedonistic phase, realizing he can do pretty much anything he wants and all the consequences get erased the next time he wakes up.  Eventually, he realizes he is good and truly trapped and tries to escape by killing himself, in many, many different ways.

Then, after the disbelief, fear, hedonism, and depression get worked out, he begins to become aware of the people and world around him.  You see, his character is the very definition of a narcissist at the start of the movie.  Phil Connors is “a person who has an excessive interest in or admiration of themselves.”  And like many narcissists, he is charming; and it is common practice for people to root for a narcissist to become a better person.

Woven throughout the movie is a love story that emerges between Murray’s character and MacDowell’s character, and it becomes clear that the “correct” and healthy connection between these two is part of the resolution needed to break out of the time loop.  In the meantime, Murray’s character begins to realize what a potential gift it is to be immortal, at least in terms of learning new skills.  He masters many talents, including piano, sculpting ice, and card-throwing.

Close, But No Cigar

As the character takes a more humanitarian view of the world, trying his best to help the members of the community, especially ones in danger on the day of the time loop, he eventually perfects a routine that will do the most “good deeds” on that given day.

He reveals to MacDowell’s character, who he has figured out how to convince that they are in the time loop together (but he is the only one that is aware of it), that he cannot save a local homeless man from dying.  At one point MacDowell’s character asks him if he is god, to which he replies, “maybe I am a god, but not the God.”

Duration in the Loop

This part of the movie is best summed up in the Wikipedia page:

The duration of Phil’s real-time entrapment in the time loop has been the subject of much discussion.  Ramis once said that he believed the film took place over 10 years.[34] When a blogger estimated the actual length to be approximately 9 years, Ramis disputed that estimate and his own. He replied that it takes at least 10 years to become good at an activity (such as Phil learning ice sculpting and to speak French), and “allotting for the down-time and misguided years he spent, it had to be more like 30 or 40 years.”  A similar estimate suggests that it takes at least 10,000 hours of study (just over a year’s worth of time) to become an expert in a field, and given the number of loops seen or mentioned on screen, and how long Phil could spend per day studying, that Phil spent approximately 12,400 days or nearly 34 years trapped.  In Rubin’s original concept draft, Phil himself estimates that he has been trapped for between 70 and 80 years, having used books to track the passage of time.

Director Harold Ramis was said to have adopted some Buddhist principles and beliefs after his marriage to his second wife.  Buddhist tradition extols the virtues of reincarnation and the long duration of time that it takes for a soul to evolve.

Change, and the Struggle to Change

Perhaps an unintended consequence of the movie is a surprisingly accurate portrayal of how much effort it takes to change to “un-shape” who we are into someone else and someone better.  The themes of selfishness and hedonism always prove to be short-sighted, but are not really challenged in a profound way by conventional religious beliefs or atheism, which really has a tough time defending against a “do what you want and get away with as much as you can” approach to life when you very existence is limited to one shot.

Even punishments and rewards have limitations if you think your “goodness” or “badness” will be measured out in just a single lifetime.  Groundhog Day is very entertaining, and a real “slice of life” of the time period (the 1990s) and culture (American).  But the spiritual theme is probably what keeps the movie relevant, even after all these years.

If you would like to watch a fun film with a solid spiritual premise, then you should watch Groundhog Day.  The film does an excellent job of crystalizing what immortality could teach us that a single lifetime really cannot.  The film successfully argues that there are many dead-ends that lead back to the same starting point, and true evolution is a tricky business that requires dedication … or the inability to escape the lesson until you get right!!

Preparing Your Tarot Deck for Readings