The Moon represents how we give and want to receive love.  The placement of Moon for you and another person will determine how you will want to share emotions, enhancing both understanding and misunderstanding depending on the placements (sign and house) of your Moons.

This article will look at Moon to Moon interactions in charts and discuss how they may present in real-life interactions: romantically, between friends, with employers/employees, and family.  Some placements make flow easy, others are combative, and some are just plain frustrating. Knowing the Moon in your chart and the other person’s chart can help increase closeness and avoid heartbreak.

The Moon: Giving and Receiving Love

In astrological work, the three most common areas people want to know about are love, career, and family, usually in that order of importance.  When potential clients approach me about a romantic relationship or while in pursuit of a romantic relationship, they will often ask about Sun sign compatibility, usually saying something like, “I am a Taurus and I read that I should not date an Aquarius, is that true?”

Well, what’s true is that Taurus and Aquarius challenge each other, making any interaction stressful, whether it is good stress (excitement and attraction) or bad stress (dislike and disagreement).  One thing is for certain, these signs interact intensely.  But what is not obvious is that these signs can have a great relationship if the Moon signs of the people are compatible.

If I looked at their chart and saw that their Moons were in the Taurus/Aquarius dynamic, I would have to inform them that the interpersonal relationship could succeed only if both of them were very mature and authentic.  The same dynamic that would make Sun signs successful out in the world, would not enjoy the kind of challenge these signs bring to each other in private and vulnerable space.

The problem stems, not so much from the difference between earth energy (Taurus) and air energy (Aquarius), but the fact that both signs are unyielding (fixed) and will not give ground if they believe they are right and the other person does not agree.

How the Moon in the Signs Feels It, Shares It, and Wants It

In order to find out where the Moon is in your design, you will need to get your chart cast for the day, time, and location where and when you were born. The chart will contain the following symbol somewhere around the wheel and it will be in a certain sign and house. 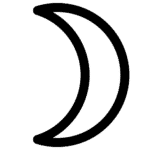 Moon in Aries shares it “directly”, feels it “independently”, and wants “excitement”.

Moon in Taurus shares it “cautiously”, feels it “conservatively”, and wants “security and stability”.

Moon in Gemini feels it “cleverly”, shares it “by talking”, and wants it “instantly”.

Moon in Cancer feels it “deeply”, shares it “warmly”, and wants it “completely”.

Moon in Leo feels it “dramatically”, shares it “romantically”, and wants “to be admired”.

Moon in Virgo feels it “practically”, shares it “particularly”, and wants it “precisely”.

Moon in Libra feels it “sympathetically”, shares it “fairly”, and wants “harmony”.

Moon in Scorpio feels it “secretly”, shares it “intensely”, and wants it “possessively”.

Moon in Sagittarius feels it “passionately”, shares it “wisely”, and wants it “grandly”.

Moon in Capricorn feels it “competitively”, shares it “ambitiously”, and wants “status”.

Moon in Aquarius feels it “separately”, shares it “idealistically”, and wants it “perfectly”.

Moon in Pisces feels it “empathically”, shares it “globally”, and wants it “spiritually”.

Aspects of Moon to Moon

Each sign aspects itself and another sign in a particular way when two points are involved, with an individual’s chart or person to person.  These aspects determine how the points will interact energetically; the closer the points are by degree, the more intense the exchange and interaction.

The points are one sign apart (example: Mercury in Aries/Mercury in Taurus), so they subtly influence one another (in this case: fire and nearby earth).

The points are two signs apart (example: Mercury in Aries/Mercury in Gemini), so they complement one another (in this case: fire and nearby air).

The two points are three signs apart (example: Mercury in Aries/Mercury in Cancer), so they conflict with one another (in this case: fire and water).

The two points are four signs apart (example: Mercury in Aries/Mercury in Leo), so they are supporting one another (in this case: fire and fire).

The two points are five signs apart (example: Mercury in Aries/Mercury in Virgo), so they are tweaking one another (in this case: fire and far away earth).

The two points are six signs apart (example: Mercury in Aries/Mercury in Libra), so they are trying to balance one another (in this case: fire and far away air).

In this case, both individuals have the Moon in Gemini, one at 4 degrees and the other at 21 degrees.  These Moons are conjunct by sign, but not by degree.  They both give and receive love in the same fundamental way, through communication, by talking and listening to one another, texting and writing.

Air sign Moons do very well together because they process emotion through their minds. With Gemini as their sign, their planetary ruler is Mercury, so they can be known for their Mercurial (or ever-changing and adapting) emotional state.

Moon in Cancer to Moon in Capricorn

Knowing your Moon and the Moon of the people around you, or most closely connected to you, can take you a long way in terms of improved and successful feelings towards and about each other, as well greater understanding as to why someone does or does not “feel right” to you.