When two points trine with one another, they support one another.  The point of communication will give to and get support from the point of dreams, surrender, and spirituality.

This month, when the faster moving Mercury goes back to 15 degrees 58 minutes (15d58m) of Scorpio, it will trine with Neptune at the same degree, but in Pisces, at 5:28 pm EST on November 13th.  The impact of this relationship begins to be felt up to 3 degrees before and 3 degrees after the exact aspect and is known as the orb of influence.  When the faster moving body approaches, the aspect is said to be approaching and is building energy.  Once the exact aspect has passed, the aspect is said to be separating and is losing energy.  The duration of this particular aspect will run from November 9th to November 17th. 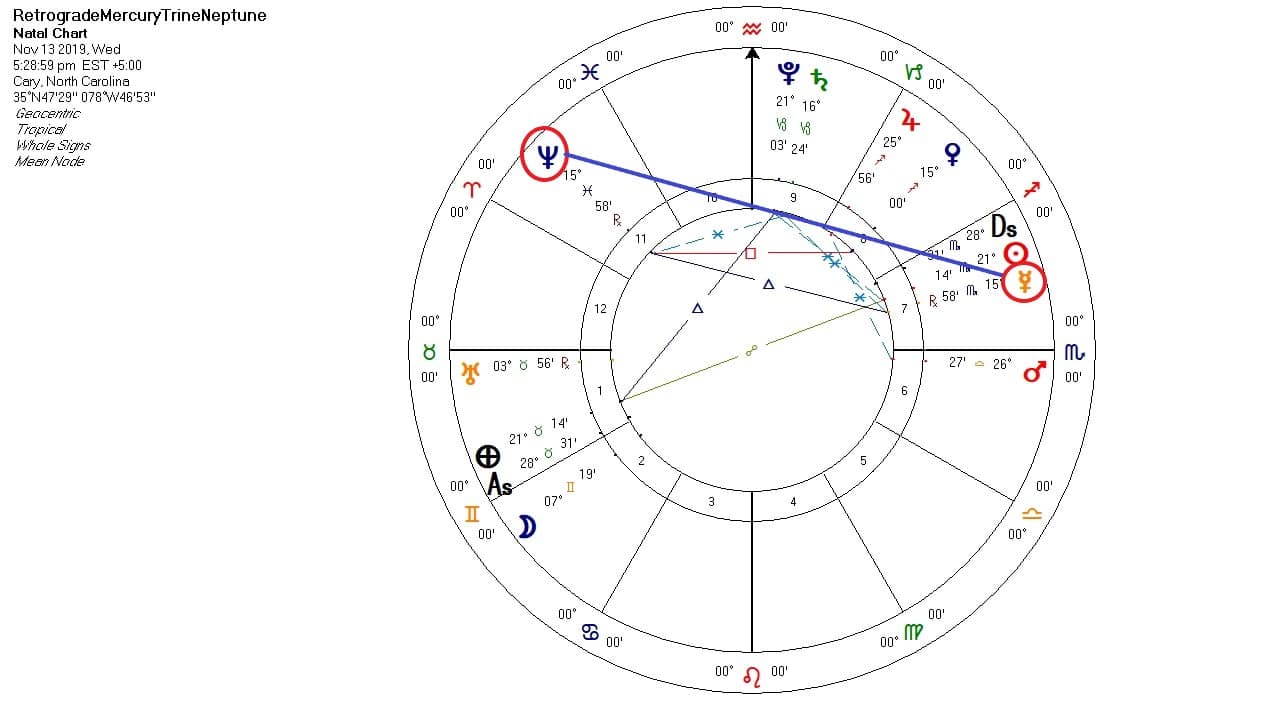 With Mercury moving through Scorpio at this time, there is a focus on communicating the truth, revealing secrets, creating secrets, and keeping secrets.  Scorpio rules dark places and Mercury is like a navigation tool to be used while traveling through the dark and hidden realms.  This action by Mercury is even more pronounced when it is retrograde; it really wants to “dive in deep”, psychologically speaking.

While retrograde the spiritual energy is profoundly internal and even more difficult to assess, like a fog at night on a New Moon. We simply have to feel our way through and wait for time to pass to see what energy manifested within us that is meant to “come out” when Neptune goes direct again.

The Sabian Symbol for Neptune at the time of the trine is 16 Pisces, “the flow of inspiration”. Jones says, “this is a symbol of the spiritual power which the development of civilization has brought to a point of practical potentiality, and on which each person may draw in meeting any and all critical issues of everyday living”.

The trine aspect creates a powerful flow between two points. If a sextile aspect, also a flowing aspect, is a straw’s diameter, then a trine is the glass or cup diameter the straw would be sitting in to extract the liquid.  Mercury and Neptune in trine in water signs represent a powerful psychic/emotional event.  With both points retrograde, this event is going to happen internally as a form of revelation, insight, epiphany, and divine download!

The connection to spirit and dreams will be particularly intense during this six-day stretch so you might find it very useful to have a journal near your bedside, especially if you decide to set an intention before you go to sleep.  You can ask to speak with or share a dream with someone that has passed on or even try to make a dream connection with someone in your life by asking them to join you in the dream state and seeing if they would like to try to use the energy to share a dream with you.

This energy will be even more intense since Venus will be exactly square Neptune the very next day (so I strongly suggest reading the Venus Square Neptune article after reading this one).  The general effect of the aspects of Mercury and Venus to Neptune (one a trine and the other a square) simply indicate tremendous intensity at the psychological and relational levels.  The insight will come easily (Mercury trine Neptune), but the way the insight works in your relationships will bring considerable challenge (Venus square Neptune).

The speed and depth of entering a meditative state will be enhanced, as would past life regressions through hypnosis.  The boundary between spirit and reality will be open and intense.  It will also be a time when mind-altering drugs or substances can be particularly strong, so it would be wise, if use them, to do so properly and with support.

The Chart of George Floyd’s Death

Full Moon
The moon is currently in Capricorn
The moon is 14 days old
Back to top button
Close
We use cookies to give you the best experience. Continuing using this site we assume that you are happy with it.
Accept Read More
Privacy & Cookies Policy
Necessary Always Enabled