This article will look at one of these dynamics happening between two points this month, Venus in Sagittarius squaring Neptune in Pisces. When two points square “off” with one another, they challenge and compete with each other.  The point of relating will challenge the point of surrender and spirituality.

The Square, and Venus and Neptune

This month, when the faster moving Venus reaches 15 degrees 58 minutes (15d58m) of Sagittarius, it will square Neptune at the same degree, but in Pisces, at 11:58 am EST on November 14th.  The impact of this relationship begins to be felt up to 3 degrees before and 3 degrees after the exact aspect and is known as the orb of influence.  When the faster moving body approaches, the aspect is said to be approaching and is building energy.  Once the exact aspect has passed, the aspect is said to be separating and is losing energy.  The duration of this particular aspect will run from November 11th to November 17th. 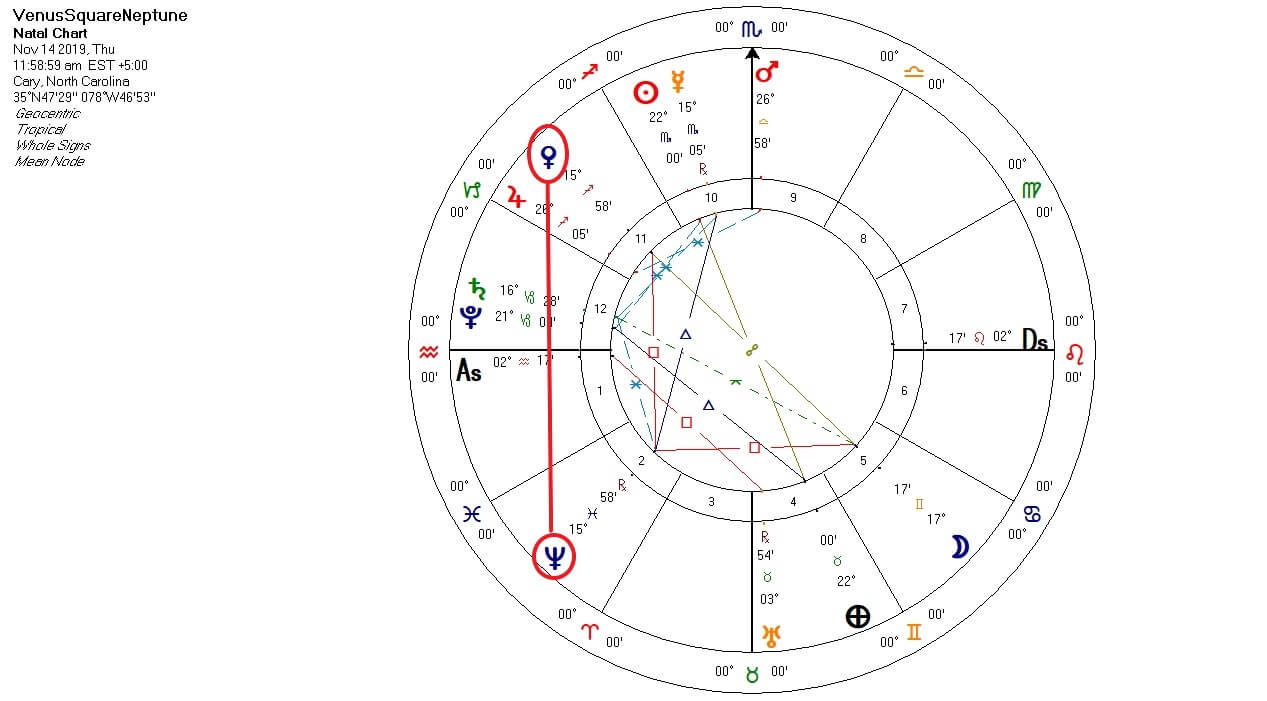 With Venus moving through Sagittarius at this time, there is a focus on “divine” love and the philosophies of love.  This placement is much less personal than when Venus moves through the first 8 signs of the Zodiac.  She enters a sign that is concerned with love and relationship authority, not the couple, but the officiant who performs the wedding ceremony or the priest that blesses the union.

The Sabian Symbol is 16 Sagittarius, “seagulls watching a ship”.  From the book, The Sabian Symbols, author Marc Edmund Jones says, “this is a symbol of the spirit’s demand for its full share in the privileges and rewards of human society, and of the individual’s realization that his personal interests are served only as he maintains an unceasing vigilance in his own behalf”.

He assigns the keyword as ALERTNESS. Further, he says, “when positive, the degree is a gift for recognizing every opportunity at hand, and when negative, aimless expectations.” (225).

Neptune represents the spiritual energy, dreams, and the collective unconscious; it is the ocean of consciousness.  Neptune rules mystery, the unknown, and spiritual connection through the sign of Pisces and the 12th House of Spirituality and Hidden Realms.  It is a water point that is generational, spending around 17 years in a sign.  Currently, Neptune is moving through the sign it rules, Pisces, which it entered in 2010 and will leave in 2026.

The Sabian Symbol for Neptune at the time of the square is 16 Pisces, “the flow of inspiration”. Jones says, “this is a symbol of the spiritual power which the development of civilization has brought to a point of practical potentiality, and on which each person may draw in meeting any and all critical issues of everyday living”.

The square aspect seeks to challenge energies to force growth; points “encounter each other” from disparate elements, in this case, fire and water.  During the period of this square, the point involving relating and the point involving surrender and spirituality will test each other. This square is likely to be less conflicting than other square aspects since both signs are mutable rather than cardinal or fixed; they prefer to adapt.

Venus in Sagittarius is concerned with the higher octaves of love and relating, the philosophies, psychologies, and beliefs about love.  Neptune in Pisces is much more ethereal and comfortable dissolving energy with its vast and drowning presence.  The strain comes from how our personal relationships and behaviors match our most spiritual beliefs.

A good, simple shadow concept for this square is hypocrisy.  Those who profess Christian “love” while acting and speaking in ways that harm or put fear in others would be an example of the negative outcome of this aspect between these two points.  We are all part of “God’s plan” (Neptune), but some people have to be told how to love or cast out because our human authority (the Bible) supports my prejudice (Sagittarius).

The healing work emerges when the spiritual aspect of Neptune helps people realize that philosophies of love built on conditions of sexual orientation, agreement with political views, or other restrictive and exclusionary beliefs fail to recognize that they are swimming in the same water as everyone else. In other words, Neptune dissolves the prejudice.  I was a racist (Sagittarius) until I joined the military and had to count on someone with different skin color and he proved to be just another human being like me (Neptune).

More personally we may find it hard to trust our relationships when we need to surrender and have faith (Pisces), rather than trying to exert authority and control (Sagittarius).  We may even have relationships that we need to let go of during this transit in order to grow and evolve. Neptune will eventually dissolve any and all “philosophies” and “beliefs” that we may “think” and “argue” are eternal about how we relate to others, especially ones that are willfully ignorant or particularly narrow.