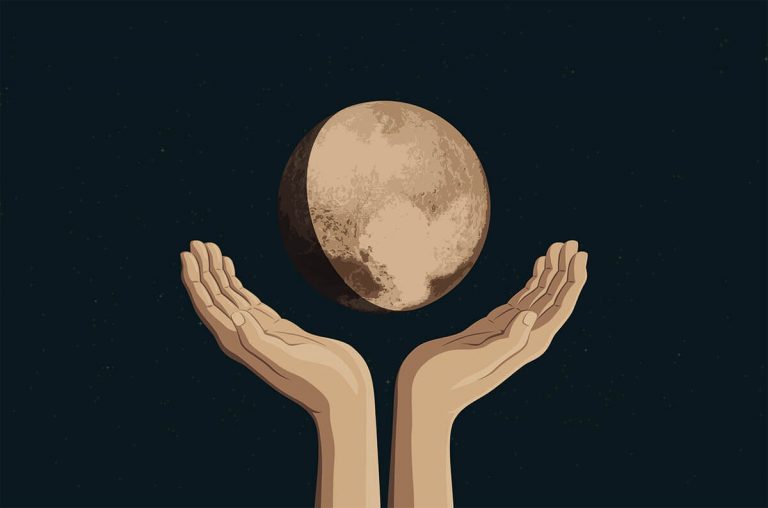 Pluto helps us to discover the aim or purpose of an individual’s incarnation. Pluto poses the question: “What am I here to learn in this lifetime? What awareness am I meant to evolve into? What path of transformation am I meant to walk?”

Because these questions are so large and so deep, you can be sure that the answers are not easily nor straightforwardly won! Let’s look at how Pluto operates in the birth chart to facilitate the inner awakening to our true purpose.

The School of Dark and Light

Pluto is often associated with the symbol of the phoenix, a mythical bird that burns up in flames and then is reborn from the ashes. Pluto, mysterious as he is, both sets the fire and midwives the rebirth!

Pluto is the planet of transformation and cycles of death and regeneration, and for this reason, his mode of catalyzing personal evolution is usually dialectical.

A dialectical evolution is one in which the individual is awakened to an understanding of one concept through the experience of its opposite.

We come to understand love more deeply after exposure to hatred. We better understand how to establish clarity after a prolonged period of confusion. Pluto loves to catalyze awareness through the interplay of opposites, and indeed he sets up our entire existence within a framework of this kind of tension.

While you, as an individual, have full freedom of choice in this life, you did not enter this world as a blank slate. You came into this world “pre-programmed” according to the preferences of your very own Soul.

The core of your personality was tailored to the specialized environment that you were born into. Your Soul chose a family, a home environment, a country, a cultural background, etc, and endowed you with a certain core personality in the hopes that this combination of factors would— often dialectically— force you headlong into particular lessons and trajectories of growth.

The “programming” of this core personality is indicated in the birth chart by Pluto, by house and sign.

From a purely psychological point of view, Pluto’s house and sign indicate the deepest unconscious security patterns in the individual.

Pluto indicates the “bias” of your Soul— the absolute foundation of your instinctual nature. Pluto operates imperceptibly at the deepest level of your psyche with the reflexive speed and force of a mother Grizzly Bear protecting her cubs, and he instills a strong compulsion to maintain the familiar ways of operating (indicated by house and sign).

In this way Pluto is the fierce protector and enforcer of tradition and is even often symbolized in mythology as the ruthless force of Nature itself, who turns the wheel of fate and time with indifference for human suffering, caring only for the maintenance of natural law.

A hurricane cannot be sweet-talked, persuaded, or won over by a plea for compassion, and in the same way, Pluto represents a level of bias at veritably the deepest level of being that cannot really be appealed to or even fully comprehended. It simply is how we are.

Yet at the time that Pluto tyrannically enforces the laws of the “status quo”, as it were, Pluto also brings chaos, destruction of the old and outdated, and transmutation. This is another of his dialectical operations.

In Evolutionary Astrology— the school which centers upon Pluto as a means to discovering the purpose of this incarnation— astrologers also look at the polarity point of Pluto— that is, the degree that is in the exact opposite house and sign.

The Polarity Point of Pluto

Whereas the Natal position of Pluto shows us the “bias” or natural mode of operation that we are born in with— what some consider to be the imprint of the awareness that defined the most recent previous incarnation— the Polarity Point, in the exact opposing house and sign, reveals the intent or “purpose” of this life.

The polarity point represents the awareness that we are meant to integrate during the current incarnation. Depending on the other factors in the chart, this may be a level of awareness of the mode of being that is fundamentally alien to us and difficult to master.

Because Pluto represents a deeply unconscious process, you may be totally unaware of the motivational patterns of your Soul for a very long time. The tell-tale sign that we are on Pluto’s path is a quality of chronic, repetitious suffering or restriction, which circles back again and again just when one thinks oneself free of it.

There may be a period of several years during which you feel stagnated, frustrated, and “fated” to fail. You may be bewildered at the fact that the same lessons, the same mistakes, the same kind of relationships, the same problems occur over and over again.

This is due is to the tension created between the past and future modes of operating, in Pluto’s school of dialectical education!

On the one hand, we are intensely identified with the “old way” of operating (indicated by Pluto) at the very bottommost level of our Soul. (Remember that mother Grizzly Bear!) We are so identified with this mode of operating that, paradoxically, it may be very hard to even consciously perceive its influence in our lives.

On the other hand, something in us is called forth into a new frontier. Over time we will be forced to reckon with the reality that the old way is not totally working and that some new awareness is required in order for us to feel fulfilled. But we can’t ever truly transcend the influence of natal Pluto; the task is to achieve a kind of alchemical marriage between two kinds of awareness.

Until we have attained that marriage, there is a feeling of being fettered to something, and at the same time, an impulse to fly.

The potential for internal conflict is enormous, yet what appears to be stumbling blocks to the individual’s growth are actually Pluto’s enigmatic version of steppingstones, helping us ascend into a new awareness by forcing us to viscerally feel its necessity.

Often under a Pluto transit the props that hold up our current sense of identity collapse or irretrievably break down. Pluto transits can correspond to literal death, but more often they bring psychological or ego deaths— the death of ourselves as we know ourselves.

With Pluto, there is no going back, no return to innocence. Pluto shatters naïveté and exposes the parts of our personality that are bolstered through attachment to external elements.

Wherever we are identifying ourselves with things, people, titles, status symbols, the money in our bank account, our possessions, our children and even our ideas or religious beliefs, Pluto will erupt from below and catalyze awareness of the transience of these external props, and the futility of over-identifying with any mortal feature of our experience.

While these transits usually mark out the darkest and most painful periods of life, they are yet another manifestation of Pluto’s dialectical teaching style and can ultimately bring the greatest gifts that we ever receive. Pluto helps the individual stay in alignment with his true purpose, as he burns away the parts that are in the way of that fulfillment.

Pluto asks us to find the absolute, raw core of ourselves and identify with that. Everything on the earthly plane passes away, leaving only one thing standing— your eternal soul.

The tragedies and suffering that Pluto can bring catalyze a process of deepening. In the dark night of the Soul, we find the true reserves of strength that lie within us, and we discover who we really are after the mask of our persona has been ripped off.

Learning to Live with Pluto

The strength of our resistance to learning these lessons determines the magnitude of problems or confrontations experienced in Pluto’s natal house and sign.

If we really try to stave off evolving, Pluto will set our house on fire to smoke us out. If we can become conscious of the intent for this life, we can cooperate with fate instead of trying to resist it.

This may not entirely eliminate suffering and hardship, but it does give a sense of orientation that is deeply helpful. Understanding the meaning of your trials and tribulations can turn suffering into hardship, hardship into problem-solving, and problem-solving into a practical application of well-founded solutions. With time and practice, we slowly evolve into that which we are meant to become, and simply having the lodestar of the Polarity point is enough to restore hope where all hope had been lost.

We never fully resolve the tension created between these two gravitational points in the birth chart. It is a lifelong journey of spiraling which takes one deeper and deeper into oneself. As with all journeys, the Plutonian road is far more pleasant to walk if we go with the flow and follow the path of least resistance.