Leo: Salutations to the Star-Lion 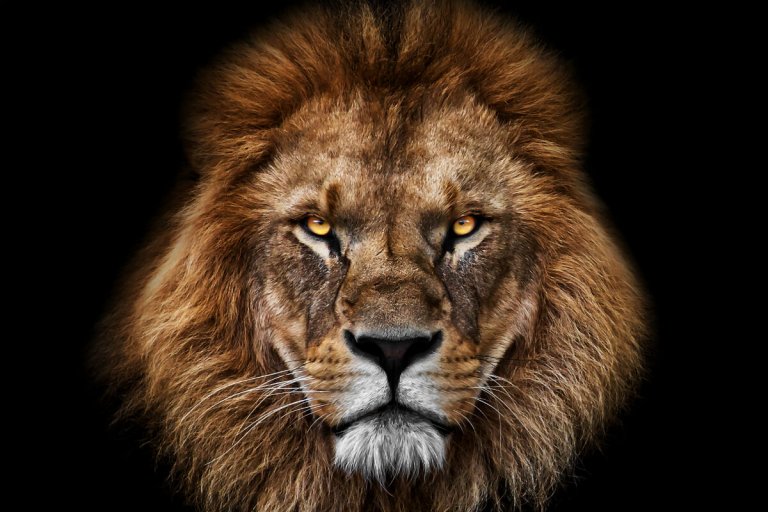 We move into the astrological sign of Leo on 23 July. Most of us know our zodiac or sun sign, but what does it actually look like in the night sky, and what’s the story behind it? It’s time to roll out the red carpet for the star-lion, Leo…

Major Arcana 8, from the Rider-Waite Tarot

Leo is the 12th largest, and one of the most easily recognizable constellations due to its many bright stars, and a distinctive shape suggesting a crouching lion, apparently facing right.

The bright light in the sky beneath Leo as seen in the photo below is Jupiter.

Also Public Domain: Map of the stars in the constellation of Leo

Spring is the best time to see the Lion in the northern hemisphere, from around the March equinox. In early April, the constellation Leo reaches its high point for the night around 10 p.m. By around May 1, Leo reaches his high point for the night around 8 p.m. local time  In early May, the Lion begins to set in the west around 2 a.m. local time. By June, Leo is descending in the west in the evening, drifting progressively westward, and by late July or early August, the Lion begins to fade into the sunset, returning to the eastern sky and visible before dawn around late September or October.

To locate Leo, look for the Big Dipper, then look southwards, Leo is below the Big Dipper. You are looking for a backward question mark pattern. This pattern is the Sickle, and its curve outlines the Lion’s mane.

Leo’s brightest star, Regulus, Alpha Leonis, ‘The King Star’, is a sparkling blue-white star at the bottom of the backward question mark pattern. The star’s name, Regulus, means “little king” or “prince” in Latin. The star’s Greek name, Basiliscos, has the same meaning. The Arabic name is Qalb al-Asad, which means “the heart of the lion.”

It is mind-boggling to consider that Leo’s fifth-largest star, Epsilon Leonis, 247 light-years from Earth is 288 times more luminous than the Sun, four times as massive, and it has 21 times the solar radius.

A triangle of stars in eastern Leo represents the Lion’s hindquarters and tail. The brightest star of the triangle is named Denebola, Arabic, meaning the Lion’s Tail.

The Leonids are meteor showers associated with the constellation of Leo. The Leonids peak around November 17-18 every year, and then there are the January Leonids; a minor shower that peaks January 1 – 7.

Leo has 15 stars with 18 known planets between them, although none of the stars in Leo have planets in their habitable zones.

The Myths and Ancient History of Leo

Leo the Lion has since ancient times been associated with the sun and is ruled by the sun in astrology.  Leo is one of the oldest constellations collectively recognized in the sky, with many ancient civilizations agreeing on perceiving it as a lion. Archaeological evidence suggests that Mesopotamians recognized a constellation similar to Leo as early as 4000 BC. The Persians knew the constellation as Shir or Ser, Babylonians called it UR.GU.LA (“the great lion”), Syrians knew it as Aryo, and the Turks as Artan.

The story goes that the ancient Egyptians venerated Leo because the sun shone in front of this constellation at the time of the annual flooding of the Nile River, the lifeblood of their agriculture and indeed, the nation entire. Marking the end of the drought, this flood shortly followed the arrival of desert lions at the river. The lions had come to the river out of need, driven by the drought of the desert at that time, but this was a welcome sign that the flood was on its way, and this connection was welcomed by the Egyptians, who honored the lion with festivals, and even today many statues of lions can be found along the course of the Nile River, proof of the reverence with which the ancient Egyptians regarded the desert lions.

It’s thought that the lion-headed fountains commonly designed by Greek and Roman architects equally symbolized the life-giving waters released by the sun’s presence in Leo.

Many stories are associated with Leo the Lion. Perhaps the best-known tales feature Hercules’ first labor and the Nemean Lion.

The lion lived in a cave in Nemea, a town located to the south-west of Corinth. It was killing and eating the local inhabitants and could not be killed because its skin could not be pierced by any weapons. Hercules surprised the lion in its cave and strangled it, and then rather disrespectfully if pragmatically, skinned the lion with its own claws, and wore its skin as a cloak, making himself even more ferocious in appearance, as well as presumably, and even more importantly, arrow-proof.

The Astrology of Leo

This fixed sign is known for its pride, ambition and determination, warmth and generosity of spirit, but above all, Leo is known for bravery. Leo is represented in the Tarot by the “Strength” card, representing the divine expression of physical, mental, and emotional fortitude, which is a virtue.

Courage takes many forms. True bravery is about proceeding in the face of fear, “feeling the fear and doing it anyway.” And then there is the courage to endure and the fortitude that quietly says to itself, “tomorrow I will try again”.

Fearless optimists who refuse to accept failure, Leos can also sometimes be their own worst enemy; reckless, self-centered, headstrong and careless, and for these reasons, unless they can learn greater patience, consideration, and self-control, they are not necessarily always as lucky in life as their spirit deserves.

Join us again next month, as we look through the telescope at The Maiden of the Zodiac, the Celestial Virgin, Virgo…

Meet the Women of the Water Element!

Cleansing, Charging, and Recharging Your Crystals and Gemstones