Jupiter: The Chart Ruler of the US – Making a Superpower

Home » Blog » Astrology » Jupiter: The Chart Ruler of the US – Making a Superpower 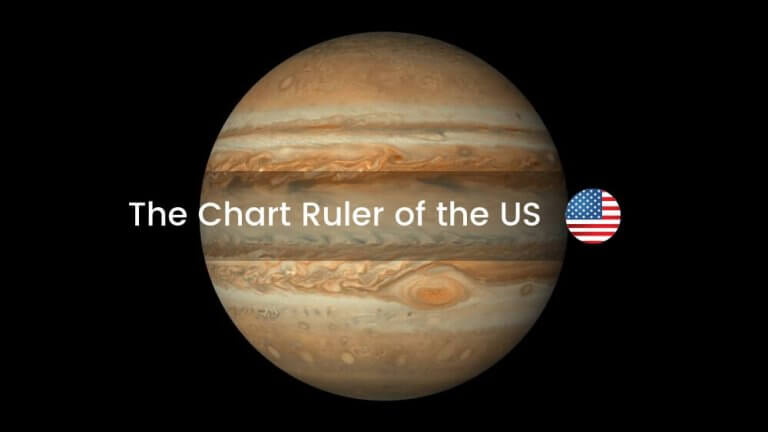 Every chart has a chart ruler, which is determined by the sign of the Zodiac that rules the 1st segment of the chart.  The chart ruler acts as the principal guide for the energy of the chart to such a degree that it is said that all energy “runs through” the ruler first.  The Sun, the Moon, and the Ascendant make up the Primary Triad of a chart, which was the subject of an article on the United States last month.

This article will look at the chart ruler of the US, Jupiter, based on the Sibley chart, which is cast using 5:10 pm on July 4, 1776, in Philadelphia, Pennsylvania.  This chart gives the US a Sagittarius Ascendant.  The technique to interpret the chart ruler will pull from Hellenistic classical astrology, which will be used to interpret the expression of Jupiter through the country of the US. 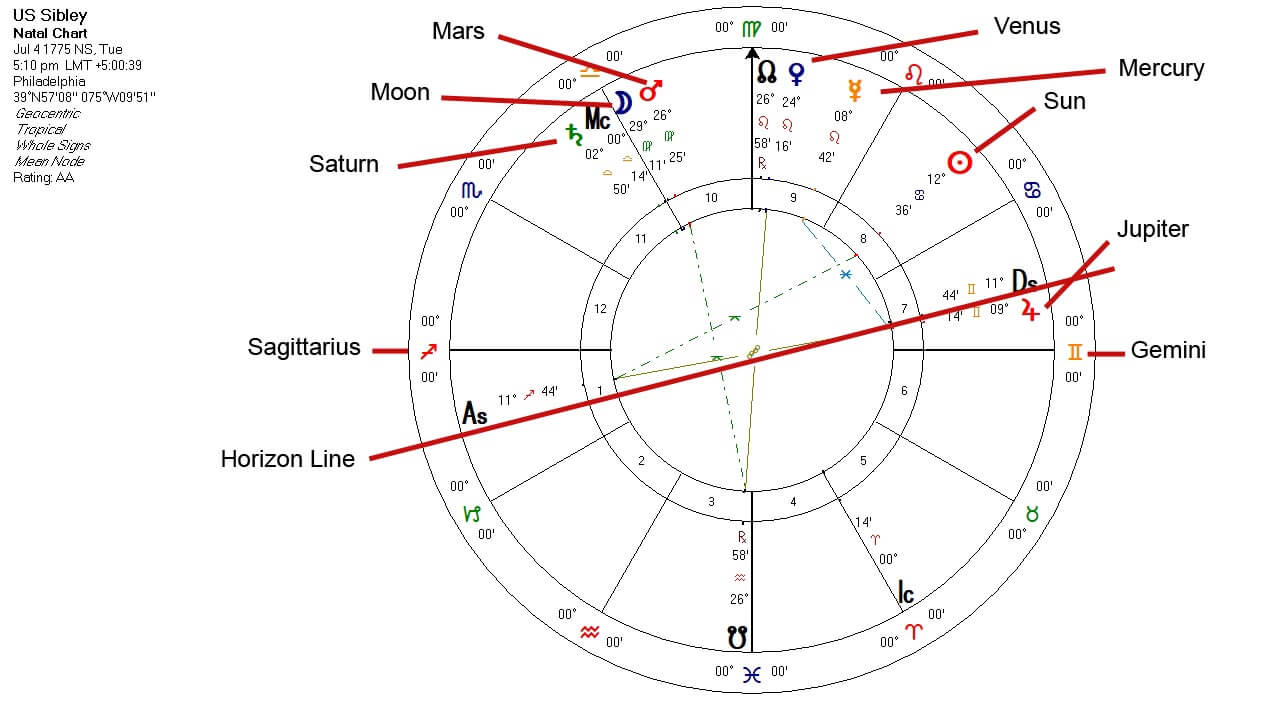 What Does the Chart Ruler Do?

The chart ruler is the primary lens of interpretation and impetus for action.  With Sagittarius ruling the first house of the United States chart, based on the Sun crossing the horizon at 11 degrees and 44 minutes, then Jupiter is the de facto ruler of the chart.  It was in Gemini at 9 degrees and 14 minutes when Congress approved the Declaration of Independence.

Jupiter is the planet of expansion, higher authority, exploration, belief systems, and travel.  As a chart ruler, it will play its strongest role through the element of its sign, the mode of that sign, the principles of that sign, and the area of life (or House) that it resides in.

Jupiter in the United States Chart

Because the rising sign of the US chart is Sagittarius, all the signs, by element, align with all the houses, by element.  By default, the first house is ruled by Aries, a fire sign.  Jupiter in Gemini ends up in the 7th House of Partnerships and Legal Matters, which puts it in an air sign and air house.  Not surprisingly, the US came into existence by a process of redefinition of the “laws of the land”.

Known as the “land of opportunity” and the “land of ideas” Jupiter in Gemini bears out many of the innovative ideas that have emerged in the US, especially through technology and manufacturing (the airplane, car, and internet).  Also known as a land of corporate expansion, patents, and copyrights, the Jupiter energy is all about doing, wanting, and learning more.  In Gemini, the point expresses itself through the element of air and the mode of mutability, which makes it one of the four adaptable signs.

The phrases “American Ingenuity” or “Yankee Ingenuity”, born from the “Golden Age of Invention” between 1880 and 1945, peaking during the Industrial Revolution of the late 19th Century and World War II (1941-1945), nicely describe Jupiter in Gemini.

While official US foreign policy has almost always been isolationist or “reluctant involvement”, it’s expansion on the world stage has followed a Sagittarius Ascendant and Jupiter in Gemini pathway to global involvement and global recognition.  Expansion is part and parcel of the US astrological DNA.

A Classical Interpretation of Jupiter in the US Chart

Classic Hellenistic astrology has some rather definitive techniques for interpreting charts and points within a chart.  It begins by determining if a chart is diurnal (a day chart) or nocturnal (a night chart).  If the Sun is above the Ascendant/Descendant line (the horizon line for that day), the chart is diurnal, and the sect ruler of the chart is the Sun.  If the Sun is below the Ascendant/Descendant line, the chart is nocturnal, and the Moon is the sect ruler (regardless of whether the Moon is above or below the horizon line).

The US has a diurnal chart because the casting time is 5:10 pm in the middle of summer, so it was well after dawn and hours before dusk.  In classical astrology, two points are known as benefics (bestowing gifts), Venus and Jupiter, and two points are known as malefics (bringing challenges and restrictions), Mars and Saturn.  Two points, one of each quality, are ruled by the Sun, Jupiter, and Saturn, and two by the Moon, Venus, and Mars.

Mercury is a special case because it is considered neutral and its association with either the Sun or the Moon is determined by whether or not it crossed the horizon ahead of the Sun or after the Sun.  If it passed the horizon ahead of the Sun, it is the morning star and in sect with the Sun.  If it passed after the Sun, it is the evening start and in sect with the Moon. In the case of the US chart, Mercury is the evening star and belongs with the Moon, which puts it “out of sect” in the US chart because it is a day chart.

In the case of Jupiter, it is out of sect because it is not in the same hemisphere as the Sun, appearing just below the horizon line in the US chart.  It helps that it is a male point in a male sign (Gemini) and a male house (7th).  Jupiter also connects with Mercury by positive aspect, a sextile, helping it against its “contrary” placement.  It also forms a trine with Saturn (which is in Libra) by sign, but not a tight aspect (over 6 degrees apart).

The US Jupiter is also very close to the Descendent meaning that it draws strength from its alliances and interconnection out in the world.  The isolationist energy comes from the US Sun, which is in Cancer, a sign that prefers privacy and focuses energy on family and those “close to home”.  All-in-all, the US has a very “public chart”, with the Moon, Mercury, Venus, Mars, and Saturn all above the horizon.

There really is no way for this country to be “hidden from the world”, but the Cancer Sun, and Jupiter below the horizon and out of sect, does explain, at an energetic level, why the US, as a political entity, would be reluctant to enter world affairs.  Even so, entry and involvement would tend towards leadership roles once “out in the open”.

Join me next month for a look at Venus in the US Chart!