Joe Biden and the US Chart

Home » Blog » Astrology » Joe Biden and the US Chart 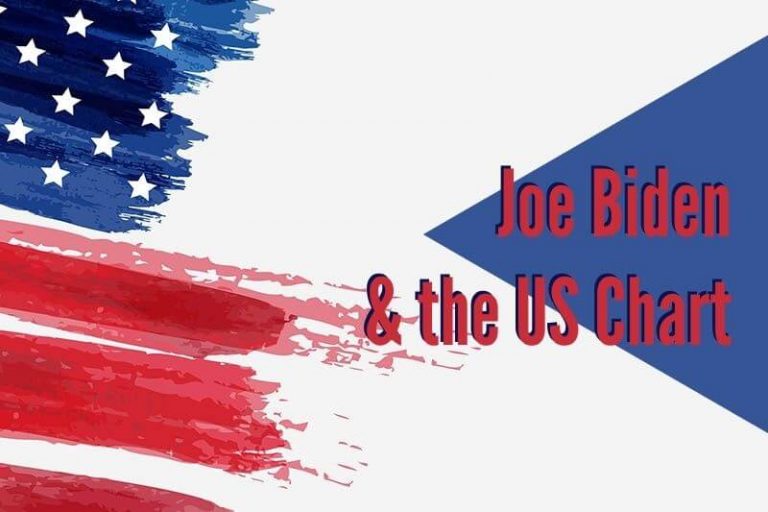 For most of astrology’s history charts were cast for leaders of countries and the wealthiest members of society.  Astrology for anyone and everyone is a relatively new and still developing branch of astrology. This article will “harken back to the old days” and consider the chart of Joe Biden, currently the President-Elect for the United States, in synastry with (in relation to) the Sibly chart cast for the birth of the United States.

The Leader and the Nation Intertwined

When looking at two charts and how they relate to one another, there are several technical considerations to explore to get an interpretation that will say something meaningful about the dynamic between a leader and his or her nation.

A conjunction between two points occurs with the points are in the same sign and near the same degree as one another.  When this happens these energies merge.  There is a very significant conjunction that will happen on December 21st, 2020.  On that day Jupiter, the point associated with expansion and exploration, will conjunct (merge with) Saturn, the point associated with rules and responsibilities, in the sign of Aquarius at 0 degrees and 29 minutes.

An entire chapter in a book could be written about this conjunction, but for the sake of this article, I will attempt to distill the meaning into a single, pithy sentence.  A new vision of growth will be defined by the needs of society, requiring a break from the old ways of thinking that have contributed to current problems in families, communities, nations, and the world.

As we look at Joe Biden’s chart in relation to the US chart, we will look for conjunct points between the two as a starting point to discuss what the meaningful relationship looks like between these two entities.

Approaching/Separating Energy and Orbs of Influence

Because an astrology chart is a snapshot of a motion picture, points are either approaching one another or separating from one another.  As the names imply, the energy that is approaching is building, while energy that is separating is diminishing.  When the point of one chart is degrees or minutes “before” the aspecting energy of another point, that energy is intensifying between the two charts and will be very significant.

The Orb of Influence describes how close two points are, regardless of whether or not they are approaching or separating.  As you can surmise, the closer the degrees and minutes the stronger the influence.  Not only is the Orb of Influence important, but so is the nature and strength of the points.  The luminaries, the Sun, and the Moon have a wider influence than Neptune or Pluto.  We would consider Pluto within 5 degrees of the Sun sharing influence, but Pluto within 5 degrees of Neptune would not.

With these technical ideas in mind, let us look at the chart of Joe Biden and the United States, pictured below:

As you can see there are many conjunctions between Joe Biden and the US chart.  There is also a key square and an important opposition within the US chart.  Keep in mind that Joe Biden has a 40 plus year career in American politics, including 8 years as the Vice President from 2008 to 2016.  It is not difficult to see that his chart and the chart of the country are powerfully connected.

Let us start in the first house where we can note that the Ascendant for the US and the Ascendant for Joe Biden is the same, in Sagittarius.  This alignment means that the two charts synchronize; so that each sign and house mirror one another.  In many ways, Joe Biden “reflects” the US chart, and the US chart reflects in the man that Joe Biden could/would become living in this nation.  One of the praises or critiques of Joe Biden is his centrist and “politics as usual” approach to governing, both as a Senator and the Vice President.

With Joe Biden’s South Node in Aquarius and moving backward to the same degree as the US Moon, we can say that these two points are approaching one another.  They are also less than 3 degrees apart making them tightly conjunct.  There is actually some karma between Biden and the “soul of the country” that needs to be worked out.  Unfortunately, he is not naturally progressive enough to feel comfortable accessing the visionary and egalitarian heart of this nation.  If he wants to move towards his Leo North Node, and growth, then he will have to embrace a dynamic leadership role, leveraging his North Node’s position in the 9th House of Authority and Expertise.

With Joe Biden’s Saturn retrograde in Gemini, we can see why he might have a speech impediment that he would have to overcome (stuttering).  In relation to the US Uranus, which wants radical and revolutionary ideas, his Saturn applies constraint.  Once again, there is a combination of energy that Biden brings that is restrictive.  As it turns out, the US Moon “looks” to Uranus because it is in Aquarius and the US Uranus looks to Mercury, which is in Cancer, which “looks” to … wait for it … the Moon!

With Joe Biden’s Jupiter retrograde in Cancer, we can see its energy attempt to connect with the US Mercury.  However, the US Mercury is retrograde, thus moving away from Biden’s Jupiter, indicating problems with effective expansion and communication.  Any work that will really get done will be “behind the scenes” or in the background.  His energy can and will provide a stabilizing effect, but this can also be a stagnating and “out of touch with the times” impact as well.

The Midheaven indicates how we attain prosperity while Neptune guides us spiritually.  The US is a diverse mixture of spiritual and religious beliefs, but one of its bedrocks has been and still attempts to be the separation of church and state.  Biden is a Catholic, but also a pragmatist.  His faith has rarely been discussed or on display in his public persona, even though it is a bedrock of his life.  This alignment can help him apply practical solutions to spiritual problems within the country.  He can get a lot done by connecting with people in an almost spiritual way.

The US prosperity actually comes from the rule of law; when this gets ignored, prosperity fails.  Biden will intuitively understand this connection, even if he gets the outcomes wrong, as he himself admitted regarding the 1994 Crime Bill, he does understand the importance of law and order as key to US prosperity.

The US Moon is all about community but in a new, revolutionary, and unconventional way.  However, Aquarius is also a fixed sign, which can be either idealistic or narrow-minded (or fanatical).  At its best, the US soul is about a futuristic view of human society, probably best captured in the science fiction of Star Trek.  At its worst, the country is another empire building regime that uses democracy as a propaganda tool to promote its empire-building.

Joe Biden’s Sun in Scorpio can introduce a power struggle energy between these two points, which he may feel personally in his faith and some of the more non-traditional aspects of American society.  Once again, energetically we see Biden’s chart function as a limiter on the US chart.  Whether that will prove to be beneficial or problematic will likely come into clear light during his presidency if he is inaugurated on January 20th, 2021

The United States, as a country, maintains a strong cognitive dissonance between individualism and collective compassion.  Chiron is the wound America has to heal and Juno is about duty and commitments.  The United States is constantly trying to balance these two energies, sometimes swinging deep into one side of the opposition and then back to the other.

With Chiron currently transiting in Aries and approaching the natal US Aries, and Mars recently in Aries (from June 2020 to January 2021), the scale has been heavily tipped in favor of individualism.  However, the pandemic is forcing a societal awareness that is attempting to rebalance back towards some equal measure supporting the collective good AND individualism.  This balancing act will inform each leader’s choices at all levels of government and business.