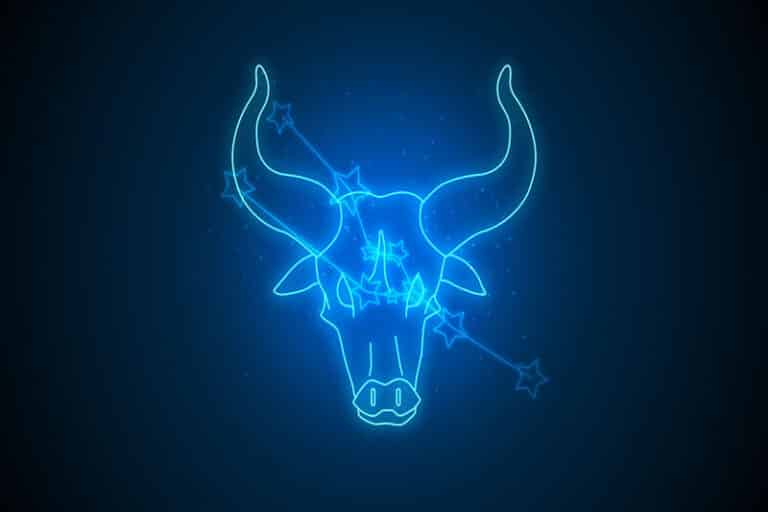 The word ‘zodiac’ comes from the Greek meaning ‘circle of animals.’ The only zodiac sign that is non-representative of a living creature is Libra, the sign of the Scales, but even its scales are borrowed from the stars of Scorpio, the giant scorpion in the heavens next door.

Taurus (from the Latin for Bull) is a fixed earth sign; the second sign of the western zodiac and represents the height of spring in the northern hemisphere in all its budding glory.

No other zodiac sign has more ancient mythology attached than the sign of The Bull, revered for its power and potency since it was hunted by early man, first as the wild ox, the mighty auroch, before the first cattle were domesticated, it is thought about 10, 500 years ago in the Near East.

The planetary ruler of Taurus, Venus, also known as Hesperus the Evening Star and Lucifer the Morning Star is the planet of love, beauty, luxury – and therefore also banking and finance.  Contrary to her popular reputation, as the supposed opposite of Mars, Venus too can be aggressive and is not always peaceful.

The real-life bull is a large, heavy, and very powerful animal, potentially aggressive but generally peaceable unless disturbed, king of all he surveys.

The star constellation of Taurus is visible between August and April. The best months to watch it are December and January when it is visible all night long, looking up to the right above and beyond the three stars of Orion’s Belt.

You will especially notice a bright reddish star, Aldebaran, the Eye of the Bull glaring down at Orion the Hunter. The constellation is hidden in the glare of the Sun from May onwards and can’t be observed in June and July.

A zodiac sign paints a poetic portrait of a person born at a particular time of year, in a particular season.

A baby born in summer arrives at a different physical environment from a winter baby, with differences of temperature, hours of daylight, maternal diet during pregnancy and so on, with potentially different effects on the baby’s physical makeup and constitution.

As a fixed sign, Taurus rules the mid zone of spring, the height of the season. The other fixed signs are Leo, midsummer, Scorpio, mid-autumn, and Aquarius, midwinter.

The fixed signs are traditionally considered the most stable and steadfast signs, protectors of the status quo, the signs most at ease with conservation and protecting continuity.

The nature is warm and impulsive, creative but patient. The genius of Taurus is sensual Aphrodite (Venus) and her corresponding Egyptian goddess Isis is often represented as wearing two horns upon her head in imitation of the Bull; a symbol often confused with the crescent moon.

Taurus rules the ears, neck and throat, and the Taurus native is known for a pleasant speaking voice and often an excellent singing voice.

They may at times seem slow to learn, compared with say, a Gemini native, but their grasp is thorough, and they are also prone to flashes of intuition and inspiration and possess an excellent memory besides. Once learned, never forgotten is the Taurean mode in life.

These people have a quietly pleasant and magnetic personality, except for the grumpier, taciturn, self-opinionated natives of the sign.

Taurus is known for physical attractiveness in general, and they are sensual, sensory people, who makes them foodies, and this sign especially needs to watch they don’t overdo the whole comfort thing, over-eating and soon.

As for love compatibility, they are notoriously stubborn…their stability is the other side of this coin. Taurus tends to be thoughtful of their friends and can be relied on in times of difficulty for good advice and encouragement.

Taurus is known for a particular magic of soothing and reassuring others.

Taurus in the Tarot

The Tarot cards associated with Taurus are The Hierophant, The King of Pentacles (Coins, Disks) and the 5, 6 and 7 of Pentacles.

Every suit in the Tarot has its own court with a king and queen, a knight and a page. The principle Court card associated with Taurus is The King of Pentacles, ruler of the element of Earth.

The King of Pentacles (Disks or Coins)

Lastly, the minor arcana cards associated with Taurus are the Five, Six and Seven of Pentacles, Disks or Coins.

These are the cards correlating with the decans of Taurus.

If you don’t feel like you are a ‘typical’ Taurus, well, we are all unique, but perhaps you are also a second or third decan Taurus native, rather than a ‘most typical’ first decan Taurus.

So, what is a Decan?

The word ‘Decan’ comes from the Latin meaning ‘ten.’  Each zodiac sign lasts about 30 days and is further divided into three blocks of roughly10 days each.  These decans or decanates are sometimes called the ‘thirty-six faces of astrology,’ bringing added depth and nuance to the psychological profile associated with your zodiac sign also known as your sun sign.

Background story– The Zodiac is the 360 degree belt of sky we can see from Earth, tracking the path of the sun across the sky over the course of the year. We call this pathway ‘the ecliptic.’

The Greeks divided this belt of sky into twelve sections of roughly 30 degrees each, using 12 for ease of arithmetic, and named these twelve sections after twelve of the constellations that can be seen crossing this imaginary pathway or belt. This gave us the zodiac signs we know today.

Taurus is still Taurus, whatever the decan and this holds true for all the zodiac signs. But an early born Taurus is born under a slightly different planetary influence than a later-born Taurus.

It’s all still Taurus, the same heavenly recipe, but with differing amounts of common ingredients.

This Taurean has Venus and Mercury in their horoscope and also a lot of leftover Aries fighting energy, so they can be the ‘raging bulls’ of the zodiac, with leadership qualities and a taste for power, more driven and less easy-going than the other Taurus decans.

These are patient but determined people with great vitality and will-power. They are big talkers, sometimes even a bit of a motor mouth, and do very well in teaching, broadcasting, public speaking, journalism, acting and entertainment.

This Taurus loves to learn and to test things out figuring out how they work. They also adore their creature comforts, food, drink and all the rest of it. They tend to be green-fingered, interested in landscape and countryside pursuits, and are fond of animals who usually respond to them very well.

This Taurean likes to be boss, but is generally a benevolent, generous person, affectionate in nature, though they know what they want and do not want, can be a stick in the mud, and are strong in their dislikes as well as their likes.

Second decan Taurus is ruled by the secretive, psychic, domestic Moon and Mercury, planet of intellect and communication. This makes for a rather glamorous combination, in the magical sense as well as the more usual sense of the word. These Taurus natives are studious, alert, perceptive, and forceful with an unusually active mind. The drawbacks may be carelessness, forgetfulness or fickleness, or picking up things or people only to drop them again.

The Moon and Mercury is a combination of emotional intelligence and logical intelligence or communication skills. These people are socially gifted, natural psychologists, instinctively knowing how other people work and what makes them tick, plus they tend to be very good speakers, and they often have beautiful voices too, or at least, noticeably smooth and pleasant speaking voices.

On the negative side, such is their charisma, like a Pied Piper or Svengali-type figure, they may, if so disposed, lead others astray.

Taurus in general is usually a good cook. And they are warm and nurturing parents, but with the best intentions, the second decan Taurus in particular can worry, and become something of a control freak if they don’t rein in their anxiety for the welfare of their loved ones at the expense of their freedom of independence.

Third decan Taurus is ruled by serious Saturn, the planet of Old Father Time himself. This Taurean native is responsible, dutiful, thoughtful, careful, patient and considerate. The power of this personality lies in the power of their stability, endurance and tenacity, making gains through thrift and careful investments.

This is Taurus at its most ambitious and hardworking. Saturn is the god of time, astrologically associated with boundaries, rules, and limitations.

These Taurus natives are cautious and stoic with great respect for authority. They may also rebel against authority, but these people will usually try to do this constructively, using their organizational skills and strong sense of structure. These people can a strong sense of fair play. They can be quite political and may be ambitious to lead. Taurus builds. It does not tear down.

These are very independent & self-motivated people and not only do they succeed in politics & business, but many are skilled artists, creators & performers. The later natives of this decan were born close to the Taurus-Gemini cusp, suggestive of multi-tasking and travel.

Saturn, ‘Old Father Time,’ is traditionally known as ‘the great malefic’. Those born under these decan may experience periods of depression but even when this is the case, we are usually looking at a truly benevolent person with a generous spirit and a sympathetic nature.

This could be a busy year for you socially, and a year of big strides or professional breakthroughs, if that is what you are aiming at. But if you are, then you had better mean business, no wasting time. Get that head down. Put that shoulder to the wheel, hoof that turf – and charge full steam ahead.

5 Truths About Dating a Taurus you should know