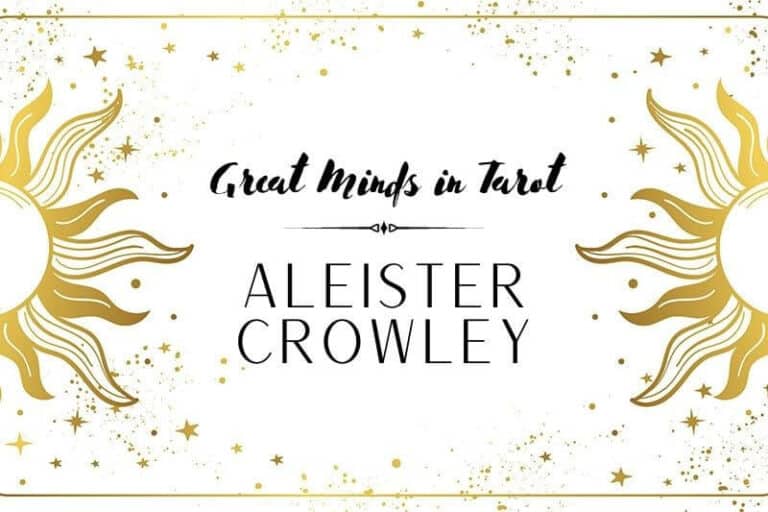 This article will distill a thinker’s essential and many contributions and provide a book list of their key works or a discussion of the deck they created (if they published one).  As with any thinkers who write extensively, some books stand out more than others, and these will be identified.  Some works have practical application and others are theoretical, depending on whether or not you wish to practice tarot or just study it.

This article will talk about Aleister Crowley.

Aleister Crowley was a prolific writer and a comprehensive list of his writings can be found on his Wikipedia page.  For purposes of this article, I will focus on the tarot deck he created with artist Lady Freida Harris.  The deck was published after their deaths (Crowley in 1947 and Harris in 1962) in 1969 by Ordo Templi Orientis.  Crowley referred to the deck as the Book of Thoth, and it is commonly known as the Thoth Tarot or Crowley Tarot.

The deck is still in print and can be purchased on Amazon.  There is also a companion book, written by Crowley, entitled: The Book of Thoth, Egyptian Tarot, which is also available on Amazon

“The Hermetic Order of the Golden Dawn (Latin: Ordo Hermeticus Aurorae Aureae; or, more commonly, the Golden Dawn (Aurora Aurea)) was a secret society devoted to the study and practice of the occult, metaphysics, and paranormal activities during the late 19th and early 20th centuries.”.

Aleister Crowley was a member of this society, as was Arthur E Waite, who created the Rider Tarot with Pamela Coleman Smith.  They were contemporaries. Crowley and Waite proved to be bitter rivals and they are both considered the foremost leaders in what would become the source material for contemporary tarot decks.  While most modern decks follow the Rider scheme, many employ Crowley’s scheme, which switches the numbers of the Strength and Justice cards, as well as the names of the Court cards for the Minor Arcana and numerous cards in the Major Arcana.

Here is the difference between certain cards:

Crowley wore many different hats and studied a breadth and depth of knowledge, which he incorporated in the tarot deck he created with Lady Harris.  His presentation of the suits included comprehensive astrology knowledge using decans to demarcate the number 2 through 10 cards:

Titles and attributions of the Wands Suit

Titles and attributions of the Cups Suit

Titles and attributions of the Swords Suit

Titles and attributions of the Disks Suit

The Thoth Tarot represents a rather small part of Crowley’s overall life.  He was a central figure in the occult world at the turn of the 20th century and spent a good part of his life writing novels, poetry, and essays.  He was a dynamic figure who produced his tarot deck later in life as an esoteric tool for occult studies and initiation.

The artwork by Lady Harris is both sophisticated and intricate, capturing expertly the complexities of Crowley’s mind regarding tarot concepts and archetypes. Any serious tarot student or scholar needs to be familiar with Crowley’s deck.  You can find a comprehensive list of Thoth-inspired tarot decks on Aeclectic.net.

Of those decks you can read askAstrology reviews for the Rohrig Tarot and the Haindl Tarot.  Both decks are worth owning if you are tarot enthusiast or practitioner.

Not only did Crowley write extensively, but many books have been written about Crowley.  If you want to explore more about the creator of the Thoth Tarot, you can check out:

Realize that he lived a dramatic life and caused strong reactions in people.  And his tarot deck is certainly not for everyone, but it does have significant historical importance in the story of tarot, especially in the United States and the United Kingdom.

What Kind of Personalities Match Each Major Arcana Tarot Card?

What Are the Eight Cycles of Life According to Astrology?