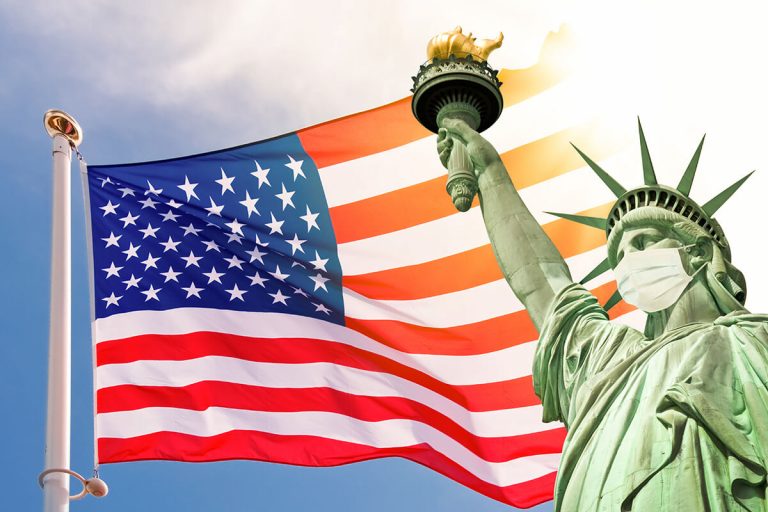 Personal birth chart astrology is fairly new to the astrological practice.  For most of the history astrology focused on the charts of the leaders of a country and the affairs of state.  The King or Queen was the astrological representative of the country at any given time.  Astrology never filtered down to any individuals outside the nobility.

In a previous article, I wrote about three charts that could apply as “birth charts” for the novel coronavirus. November 17, 2019, is the first chart, cast based on research from Chinese scientists that confirmed patient Zero contracted the disease on this date in Wuhan, China.  The second date is December 31, 2019, when China called the World Health Organization to let them know they had an epidemic that was likely to escape their borders.

The final date I wrote about was January 20, 2020, when the first case in the United States made the news.  This article will look at all three dates in relation to the current President of the United States.

First Case in the World

After considerable research and effort, Chinese authorities identified November 17, 2019, as the day patient zero contracted the virus.  Interestingly enough, when we look at this chart in relation to the President’s chart there is actually very little dynamic interaction, which was also the case with this date and the US chart.  Dynamic action between a natal chart and transits (where points in the sky are on a given day) involves hard aspects, which include the conjunction, square, and opposition.

A conjunction occurs when a transiting point is very near (less than 3 degrees) or directly aligned with a natal point.  The square occurs when a transiting point is nearly, then exactly, 90 degrees apart.  And an opposition occurs when the two points are 180 degrees apart.  If you look at the chart below, and the degrees of the points in the chart in the middle and the points on the ring outside, you will see basically no dynamic interaction, except for an opposition aspect between the President’s Saturn in Cancer in the 12th House and transiting Pluto in Capricorn in the 6th House. 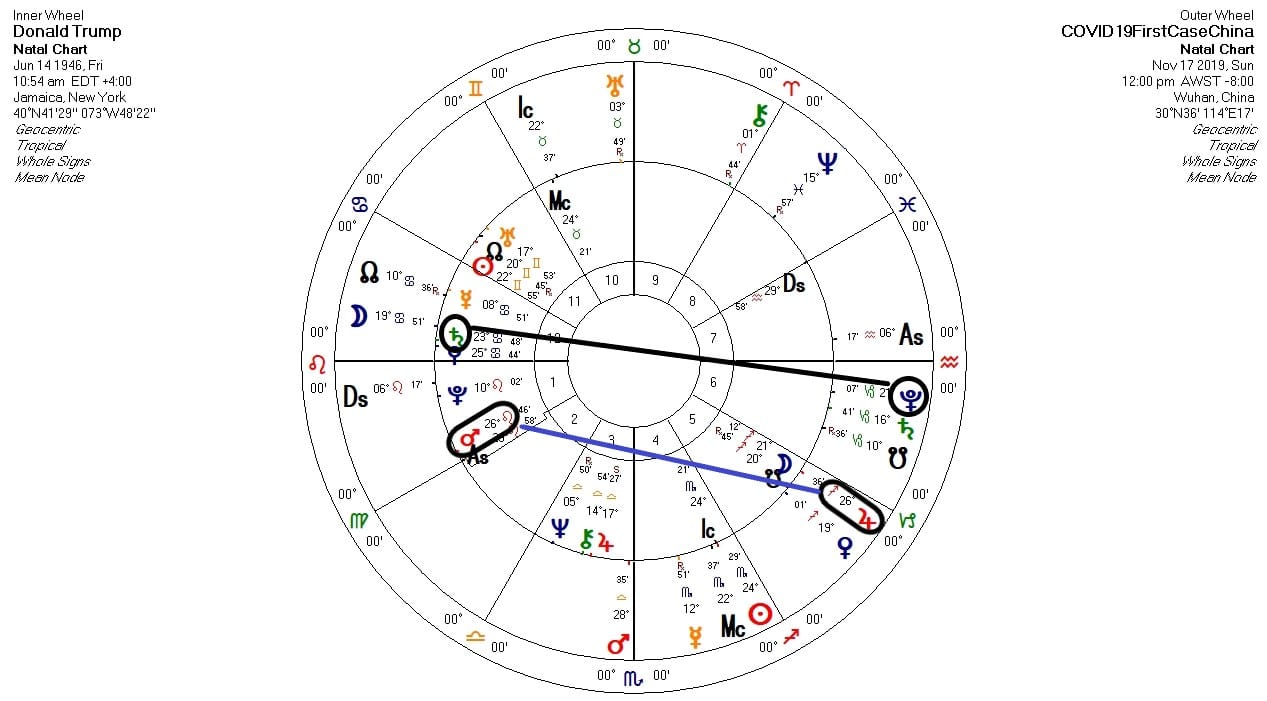 The Pluto opposition to Saturn is important and represents an approaching upheaval to the structure of the President’s life.  Granted, this President is a tremendous change agent on an ongoing basis, but this opposition will take things to the highest possible level and break structures in his personal world, which will affect the country as a whole.

I also included a beneficial aspect because the orb of influence is so tight and the points involved, Mars in Leo in the natal chart and Jupiter in Sagittarius in the transiting chart.  I would describe this transit as “riding high”.  There would be a feeling and reality of being unstoppable, but the Saturn/Pluto opposition is a much longer and harsher transit, just starting to ramp up at this time.

The next significant date to consider is December 31, 2019, which is the date when China called the World Health Organization (WHO) and alerted them that an epidemic had taken hold in Wuhan and was spreading quickly.  When we look at the chart for that day in relation to the President’s chart, more hard aspects appear. 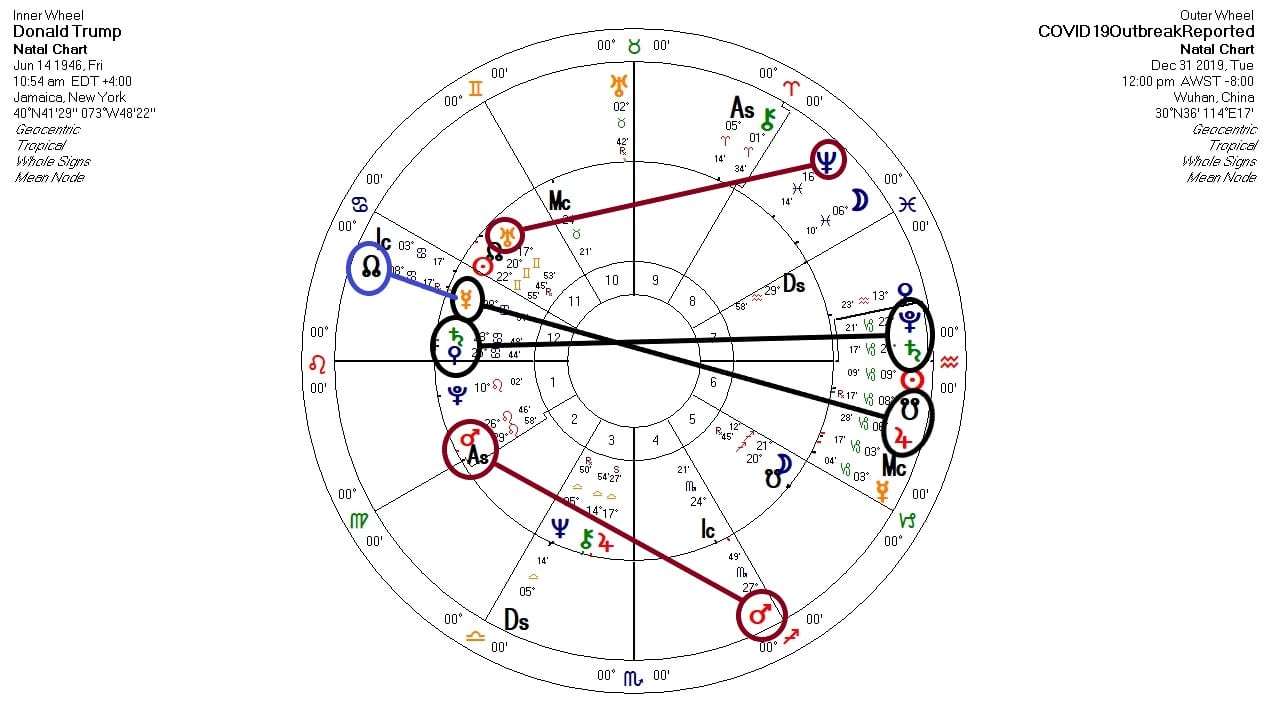 Now that the virus is known outside of China and through a global organization, we see increased dynamic activity on the President’s chart.  The Pluto opposition with the natal Saturn is getting stronger, and now transiting Saturn is getting in the mix and opposing the natal Saturn as well.  Another opposition is in play with transiting Jupiter (the fancy 4) and the South Node (upside down horseshoe) opposing the natal Mercury.  And since the South Node is opposite, that means the North Node is conjunct Mercury.

Jupiter is in its Fall in Capricorn bringing restrictions to Jupiter’s ebullience.  As much “joy” (astrological jargon for benefit) as the President had while Jupiter was in Sagittarius, he must now face limits to reality while Jupiter moves through Capricorn in 2020.  The North Node will demand/require new thinking with regard to the greater good (12th House) as well as hidden issues (also 12th House).

Additionally, two significant squares appear on this date.  Transiting Mars in the 4th House challenges the President’s Ascendant, his identity, both projected and perceived.  The theme of hidden difficulty appears again with Mars at the bottom of the chart in the sign known for secrets and power issues.  Neptune transiting the 8th House applies challenging pressure to the President’s natal Uranus, which will increase confusion around his Uranian vision for community (his 11th House concerns).

The first identified case in the US occurred on January 20, 2020, in Washington State.  The dynamic interaction intensifies, with the primary opposition of the transiting Saturn and Pluto at the same degree as the natal Saturn. 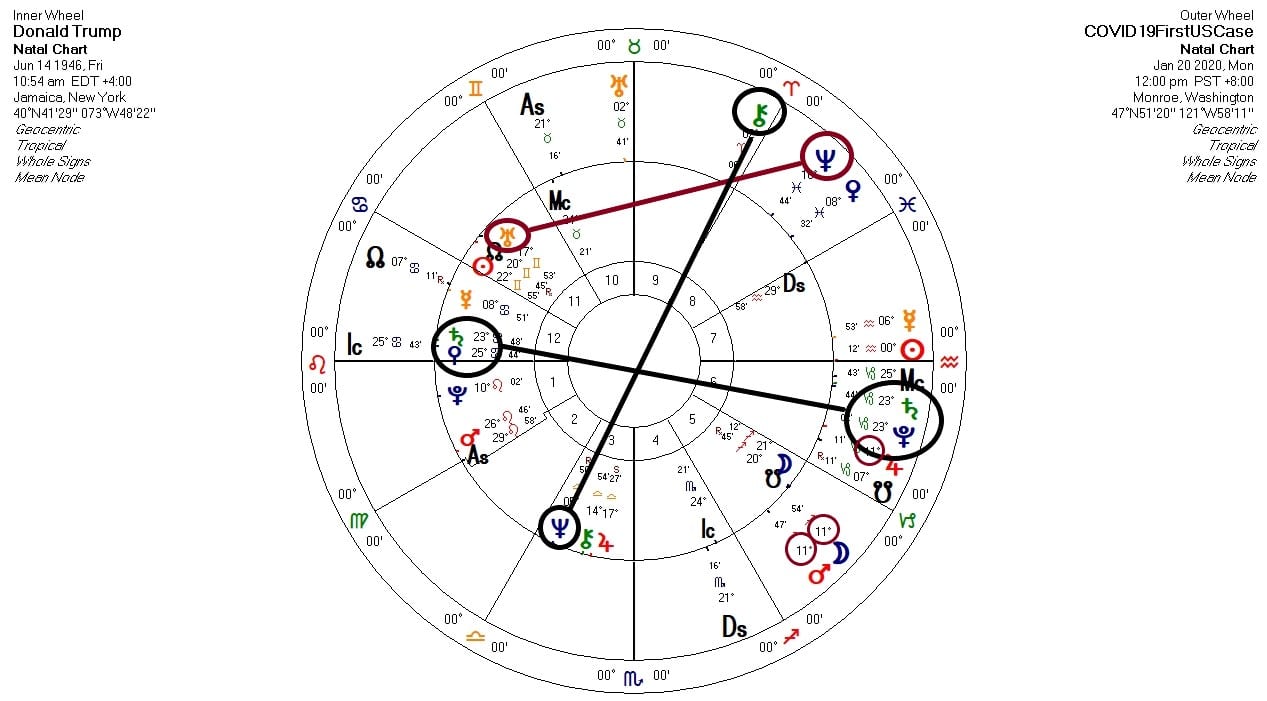 In his book Planets in Transit, Robert Hand has this to say about transiting Pluto opposing natal Saturn, “Under this transit, you will experience changing circumstances and situations that may force you to surrender many things – material goods, relationships, principles – that you have previously held on to.  You will probably resist these ‘losses,’ which is how you will experience them, with great tenacity and stubbornness.  You will need great discipline under this transit, because you may not have any resources to waste, and you may be forced to do as much as possible with very little.” (510)

And Erin Sullivan, in her book Saturn in Transit, has this to say about Saturn opposing Saturn, “Childhood’s end.  When Saturn moves around to oppose its natal position, a tremendous tension builds up, often releasing itself in a confrontation with authority.” (56).  Since this represents the President’s 3rd Saturn opposition and it is merged with Pluto, the results will be particularly intense, not with regard to authority, but with regard to reality.

Also, at this time transiting Chiron, in the 9th House, begins its opposition with natal Neptune while transiting Neptune is getting more tightly aligned in a square with the President’s natal Uranus.  This double Neptune activation can certainly make the issue of the virus confusing and problematic.  Also, worth noting, on that day, three points are at 11 degrees (Mars, the Moon, and Jupiter), suggesting a type of merging around desire, emotions, and expansion.

The difficulty remains with Jupiter in Capricorn, which will eventually join Saturn and Pluto.  In short, this virus, once it became known on American soil, was and is going to have a profound impact on the President, and by extension the United States.

Astrologically, it stands to reason that the virus will have a profound and lasting impact on the President’s identity, and his role as the leader of the United States.