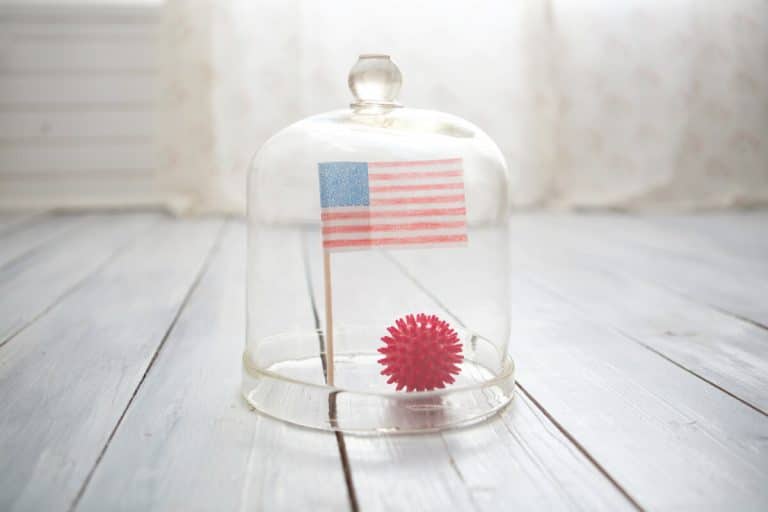 Dates and Locations without Times

Ideally, an astrologer casts a chart with the date of the event, the location of the event, and the time of the event.  The time provides the sign for the Ascendant and the degree for when the Sun crossed over the horizon.  Without an exact time, the Houses (segments that divide up the chart into 12 sections) lose their relevance.

It is likely impossible to determine the exact time of the initial moment the person in China contracted the virus, but the work has been done to identify the date.  The second important date for a chart is the call from China to WHO.  The date is straightforward, and a time may exist in a log between the caller and receiver of the call but is not needed in this case.  Lastly, the first known case in the US appeared in Washington state, time also unknown.  Since this article will look at the relation of these events to the US chart exact times are not necessary.

First Case in the World

After considerable research and effort, Chinese authorities identified November 17, 2019, as the day patient zero contracted the virus. Interestingly enough, when we look at this chart in relation to the US chart there is actually very little dynamic interaction.  Dynamic action between a natal chart and transits (where points in the sky are on a given day) involves hard aspects, which include the conjunction, square, and opposition.

A conjunction occurs when a transiting point is very near (less than 3 degrees) or directly aligned with a natal point.  The square occurs when a transiting point is nearly, then exactly, 90 degrees apart.  And an opposition occurs when the two points are 180 degrees apart.  If you look at the chart below, and the degrees of the points in the chart in the middle and the points on the ring outside, you will see basically no dynamic interaction, except for a square aspect between the US Chiron (a symbol that looks like a key) in the 5th House and the Moon in the outer ring in the 8th House. 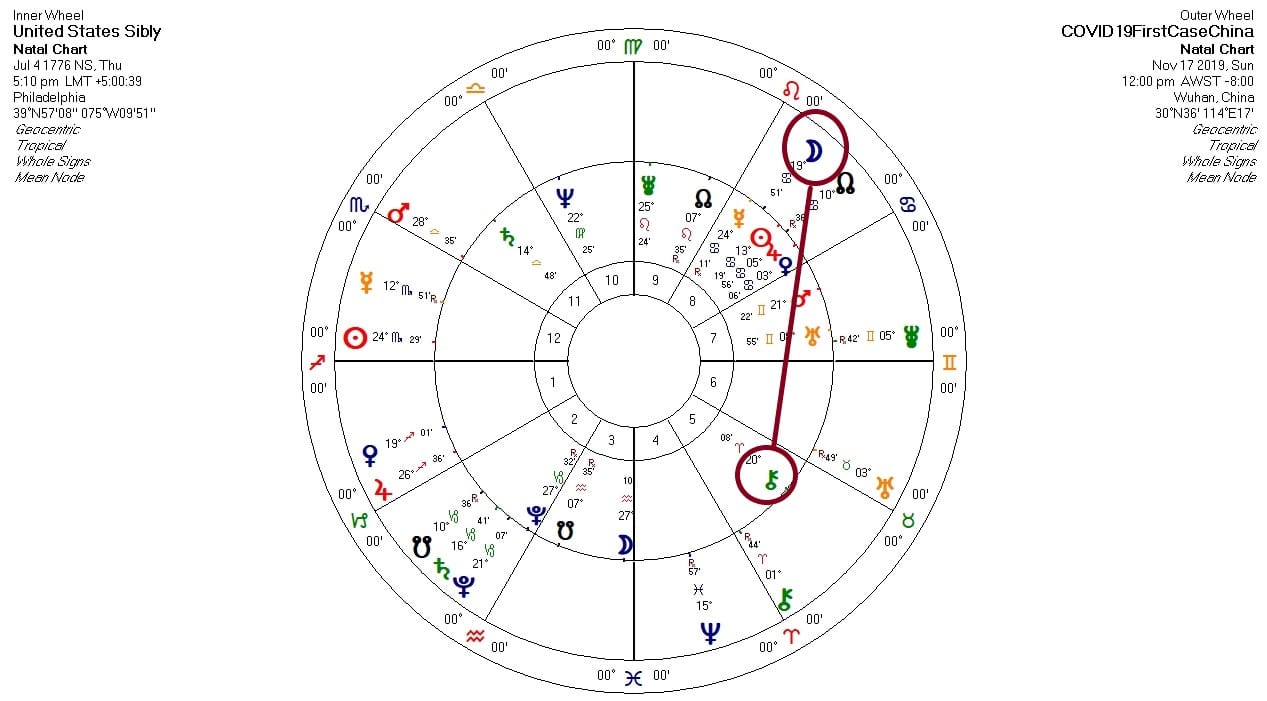 In essence, the situation is “hidden from view”, but with current knowledge about the virus, this square would indicate that “whatever” happened on that day in China would have a “soul” impact (Moon) that would challenge the US wound, which has to do with independence in play and creativity.  In each example, the Moon plays a significant role.

It is important to understand that we look at the transits for that day in the context of COVID19.  Nothing about the chart says, “virus to begin today”.  But we know the virus did begin that day, so what does it mean in context, astrologically speaking.

The next significant date to consider is December 31, 2019, which is the date when China called the World Health Organization (WHO) and alerted them about an epidemic that had taken hold in Wuhan and was spreading quickly.  When we look at the chart for that day in relation to the US chart, more hard aspects appear. 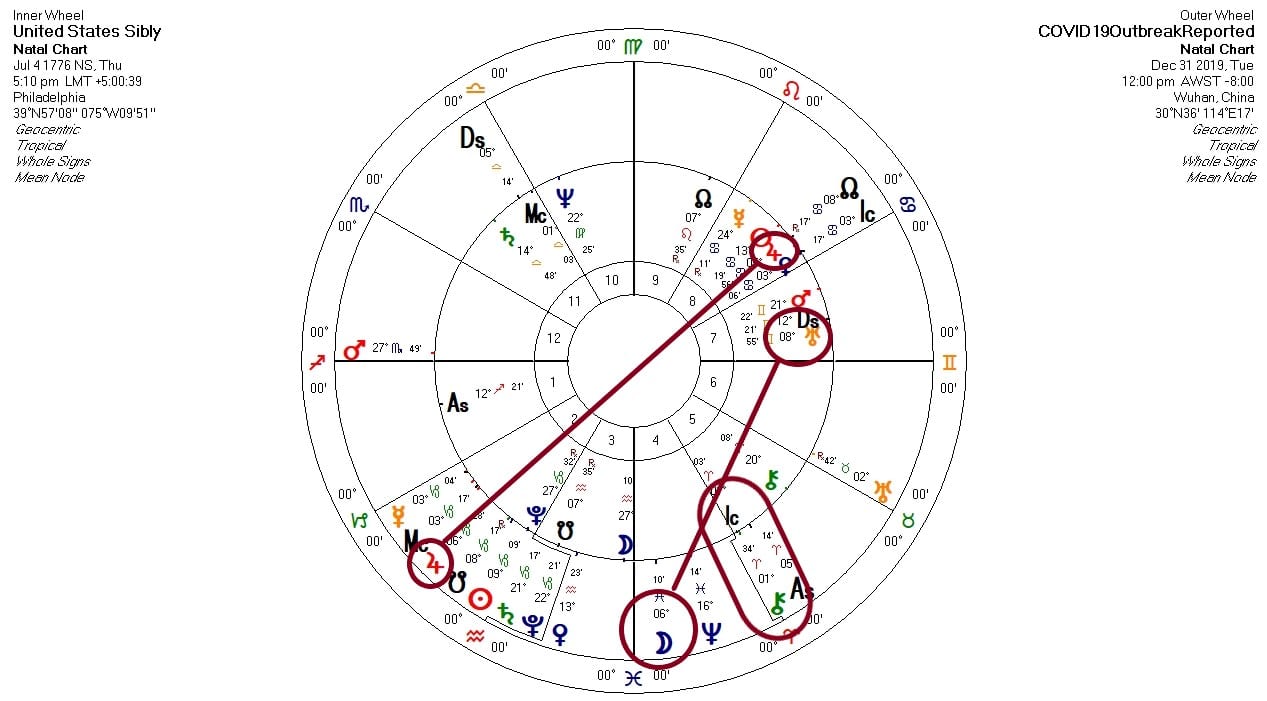 Now that the virus is known outside of China and through a global organization, we see increased dynamic activity with the US chart.  Once again, the transiting Moon squares a point in the US chart, this time Uranus.  The Moon is in the 4th House, which rules family, and Uranus is in the 7th House, which rules partnerships and the law.  There is a tension between how we feel about our emotional foundations and the unconventional rules of our society.

Additionally, the transiting Chiron sits atop the US Imum Coeli (IC), which is the location where the Sun was “at its depth” when the US was born, indicating a wounding and healing of the Soul of America.  Finally, transiting Jupiter is opposing natal Jupiter, indicating concern about the balance between the needs of the individual (2nd House) and the needs of the country and shared resources (8th House).  Unfortunately, Jupiter is in a difficult sign by being in Capricorn, suggesting limits and restrictions.

The first identified case in the US occurred on January 20, 2020, in Washington State.  The dynamic interaction increases again, with a group of conjunctions that are quite significant.  The Moon, once more, provides important insight. 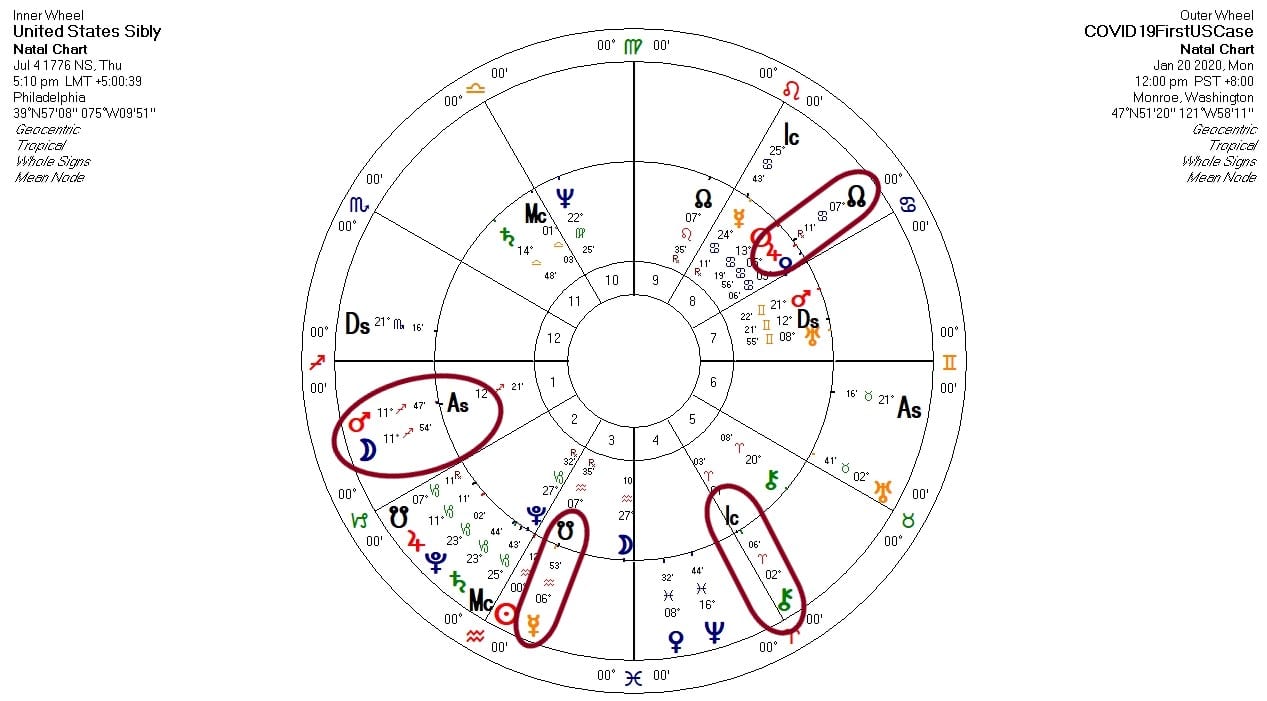 There are four conjunctions involving five transiting points.  Most profound is the double conjunction in the 1st House of Identity.  Transiting Mars and the Moon conjunct one another and they both conjunct the US Ascendant (AS).  The virus discovery within the US indicates a forceful change around beliefs and emotions that impacts the US identity.

In the 3rd House of Communication, we see transiting Mercury aligned with the natal South Node, suggesting that whatever the virus represents, the US is not ready to address it or see it for what it can become (the influence of Aquarius).  Next in line is Chiron still atop the US IC, but just past it.  And we can see the transiting Chiron heading towards a return with the US natal position, suggesting a profound wound/healing moment that occurs every 50 years for this country.

Finally, the transiting North Node in the 8th House of Shared Resources is atop the US Jupiter, indicating that the virus will provide a lesson about the beliefs and expansion of the US role in its relationships around the world and among its own people.

As you can see, from the starting point of November 17, 2019, to the first case in the US on January 20, 2020, there is an ever-increasing intensity.  Of particular note, the role of the transiting Moon is prominent in each case, but certainly more so in the last chart because of the conjunct and merging energy of Mars together with the Moon on the Ascendant.

Astrologically, it stands to reason that that the virus will have a profound and lasting impact on the US identity, its beliefs, and the wound it needs to heal around independence and selfishness (Chiron in Aries). The road ahead offers potential for important re-evaluation and change, and even now, the world is only at the beginning of the change.