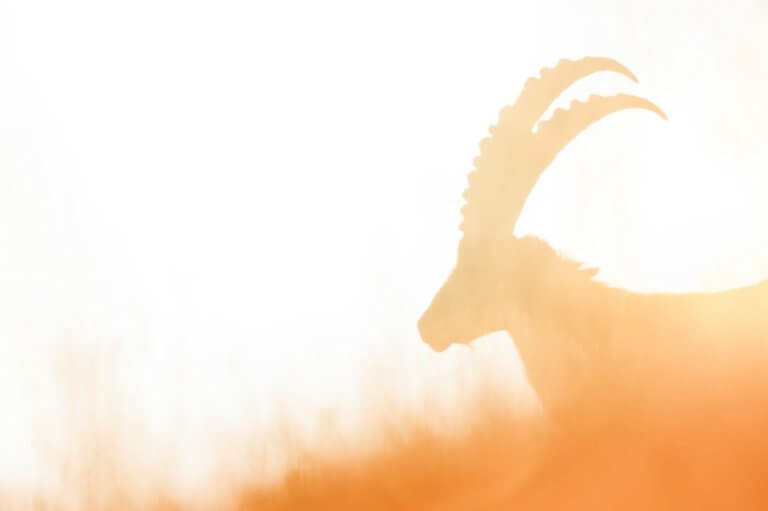 Most of us know our zodiac or sun sign, but what does it look like in the night sky, and what’s the story behind it? This month it’s the turn of Capricorn…

The constellation of Capricornus from which the sun sign gets its name Capricorn is located in an area of the sky known as The Sea or The Water, containing other water-related constellations including Aquarius, Pisces, and Eridanus.

Its name is Latin for “horned goat” or “having horns like a goat’s”, and it is commonly represented in the form of a sea-goat: a mythical creature that is half-goat, half-fish, like Pricus, the son of Chronos (Time) king of the mer-goats of Greek myth. This seems to have been an evolution legend.  The children of Pricus left the sea to dwell on mountains, leaving him alone in the oceans with no-one to teach anymore, and Pricus was a great teacher. Zeus placed him in the Sea of the Stars so that he could see his children again, and they could look up and see him.

Capricornus is the smallest constellation in the zodiac, with no first magnitude stars. Even so, the brightest star, Delta Capricorni A, is a white giant with a luminosity of 8.5 times that of the Sun.

Capricornus has three stars with known planets and contains a Messier object, Messier 30, a globular cluster 28,000 light-years distant and about 90 light-years across in size.

The cluster is approaching us at a speed of 181.9 km/s. It was one of the first deep sky objects discovered by Charles Messier in 1764.

Like other constellations of the astrological zodiac, Capricorn was first cataloged by the Greek astronomer Ptolemy in the 2nd century.

The planet Neptune was discovered in the constellation Capricornus, near Deneb Algedi, the brightest star in the tail of the goat, on September 23, 1846.

This perhaps explains or illustrates a strong astral and psychic mythic connection between Capricorn and Pisces the Fishes.

Even though Capricornus is the second faintest constellation in the sky after Cancer, its imagery is very ancient indeed, associated with myths that go back to the 21st century BC and which center on various sun gods nursed by a she-goat.

Goats, and their relatives, ibex, were depicted in Ice Age paintings, and later immortalized in myth and as the zodiac sign Capricorn.

Male ibex started fighting and mating during early winter, December and January, coinciding with the later days ascribed to Capricorn.  In the early Bronze Age, Capricornus marked the winter solstice and, in modern astrology, as distinct from astronomy, Capricorn’s rule still begins on the first day of winter. The constellation itself is actually overhead nowadays during Aquarius, due to the wobble of the Earth, an effect known as precession, but the sun sign named after Capricornus retains the dates accorded to it by Ptolemy.

Before 1000 BC the Sumerians knew Capricorn as the goat-fish or SUHUR-MASH-HA, but the constellation is nowadays more widely associated with two mythical creatures from Greek legends: the deity Pan, and the she-goat Amalthea who suckled baby Zeus, although these legends were based on far more ancient stories involving kindly she-goats and baby sun deities.

The forest deity Pan has the legs and horns of a goat, like Krotos, his son, who was a great archer and devotee of the Muses and is identified with the neighboring constellation Sagittarius.

Pan, so the legend said, was placed in the sky by Zeus in gratitude after he came to the rescue of other gods during a time the Olympian gods sought refuge in Egypt following their epic battle with the Titans, when the monster Typhon, son of the Titan Tartarus and Earth, sought revenge.

Typhon was a fearsome fire-breathing creature, higher than mountains and with dragons’ heads instead of fingers. The Olympian gods sought to escape his vengeance by adopting various disguises: Zeus, a ram – Hera, a white cow, Bacchus (another version of the myth suggests Pan) a goat.

Zeus was dismembered by Typhon, but was saved when Bacchus/Pan played a sound on his pipes, ‘panikos,’  from which we get the word ‘panic’ – and he panicked the monster long enough for an agile Hermes to collect the supreme god’s limbs and carefully restore him. In gratitude, Zeus transferred Bacchus/Pan to the heavens as Capricornus.

Another legend says that while the souls of those about to be born descend to Earth through the constellation of Cancer, via the Beehive Cluster, the souls of the dead return to the cosmic sea, ascending through the gate of Capricorn.

The Astrology of Capricorn

Capricorn is the tenth sign in the Zodiac. There is no such thing in reality as THE Capricorn personality and the same goes for all the zodiac sun signs. Your sun sign is an archetype, a keynote but of course, it is not and never could be the whole story.

The archetype of Capricorn is shrewd, wise, and even Gnostic. They are profound thinkers, often deeply enquiring, and with a wry sense of humor, self-reliant, stoic in the face of adversity, hard-working, determined and resilient.

They have high standards, and expect much of themselves but also others which, depending on other aspects of their astrological portrait, can make them demanding or even overbearing task-masters,

They are known for a dry rather than a joyful wit, and if Saturn gets too prominent, they can be downbeat, cynical and suspicious, seeing traps and problems everywhere, viewing the enthusiasm of others as premature or naïve.

Capricorn is no-one’s fool, but Capricorn carries its own weight, and the weight of others too from time to time, and Capricorn climbs the mountain to see the world, not so that the world will see Capricorn.

“Duties are what make life most worth the living. Lacking them, you are not necessary to anyone. And this would be like living in an empty space. Or not being alive at all.”- Marlene Dietrich, born Dec 27, 1901

Next time, the Water Bearer, Aquarius…