Cancer: The Starry Crab in the Zodiac Sea 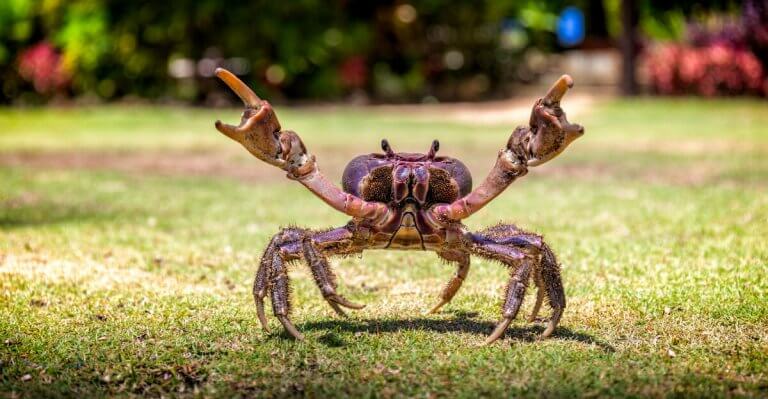 Most of us know our zodiac or sun sign, but what does it look like in the night sky, and what’s the story behind it? This month it’s Cancer’s star turn.

Ruling planet: Moon (not a planet but counted as such in astrology)
Key phrase: I feel
Body: The chest, breast, heart
Birth Stone:  Stones and metals fall under the rule of planets, not signs, but through its association with the Moon, Cancer has an affinity with pearls, silver, and crystals.
Cancer Colours: White, silver
Tree: all trees rich in sap
Flower: Acanthus
Tarot card: The Chariot (see how it is a shell?) Control, progress, teamwork, and the harmonizing of different elements.

The Constellation of Cancer

Cancer, Latin for crab, is in a dark region of the sky, and is the faintest constellation in the Zodiac, with only two stars above the fourth magnitude: Acubens (The Claw) and Al Tarf (The foot). Cancer is visible in the Northern Hemisphere in the early spring, during March at 9 PM and can be seen in the Southern Hemisphere during autumn.

It is almost impossible to see Cancer with the naked eye or even binoculars, looking between Leo, the lion, and Gemini, the twins. And it doesn’t look much like a crab at all. It looks more like a faint, upside-down Y and it’s often remarked that it’s more like the shape of a crayfish or lobster.

It was also called the Crayfish in classical astrology, and in Egyptian astrology, The Scarab. But it’s always been seen a creature with an exoskeleton; an arthropod, and Cancer appears to rise crab-wise; not sideways, but backward in the zodiac. The Sun’s entry into Cancer occurs at the summer solstice,

‘Solstice,’ Latin sol stice means the Sun seems to be ‘standing still’ as it approaches this point.

Cancer may be faint but it’s got hugely noteworthy astronomical features, with a lovely star cluster glowing at its center. Praesepe, or ‘The Manger’ is one of two Messier objects in Cancer, identified in 1771 by French astronomer Charles Messier.

As the sign of the Sun’s greatest elevation, Cancer was considered nearest to the highest point of heaven – and was called ‘the Gate of Men’ through which, it was thought, souls descended to Earth to be born.  The opposite constellation, Capricorn was the ‘Gate of the Gods’, where souls of the departed rose back to heaven.

The stars of the Beehive were all formed at the same time, from the same cloud of gas and dust around 600 million to 700 million years ago, making them four billion years younger than the Sun.

Pliny used this group of stars as an indicator of wet weather and said that when Praesepe was not visible in a clear sky, snow or heavy rain or even violent storms were on the way.

The outer edges of an approaching weather disturbance consist of very thin/high cirriform clouds, which might otherwise not be noticed under a dark, moonless night sky. But such clouds are apparently just opaque enough to block out the light of the Beehive.

Cancer’s other Messier object: M67 is much older, about the same as the age of the Sun. Most clusters don’t survive more than a few trips around the center of the galaxy because the gravity of other stars and giant clouds of gas and dust pull them apart.

But M67 has survived for four or five billion years because it’s in the outer part of the galaxy with fewer stars and gas clouds to disturb it.

Cancer also contains a planetary system; 55 Cancri, containing five known planets, with possibly more awaiting discovery. 55 Cancri is about 40 light-years away, and is just about visible to the unaided eye, although you need help to find it.

The innermost of its planets is a “super-Earth,” a few times heavier than Earth – but none of these planets has the right surface conditions for liquid water, and life there isn’t considered likely.

Cancer is associated with the Twelve Labours of Hercules after he went mad, mistook his wife and children for monsters, and killed them. His twelve great labors were performed in token of penance.

The second of his great challenges was to kill the Hydra, a terrible water serpent but his enemy, Hera, who had always hated him as an illegitimate son (yet another one) of her husband Zeus, sent a crab to harass him while he fought the serpent.

The crab faithfully did its best, nipping Hercules again and again, but he stepped on it and crushed it, or in other versions of the story killed it with his club.

Public Domain: Hercules fights the hideous Hydra, and is vigorously nipped by The Crab

Hera rewarded its loyalty and tenacity by placing it in the heavens, but she placed it in a dark portion of the heavens and gave it only faint stars as crabs need dark, quiet places to feel safe and at home.

However, its placement is as spiritually significant as shy and retiring, as the highest point in the zodiac, nearest to heaven, and the messenger of the summer solstice.

The Astrology of Cancer

Cancer is the fourth sign of the Zodiac and represents those born between June 20 and July 22. It is considered a water sign and is one of the four cardinal signs, which are the signs indicating a change of season when the sun makes its annual passage into them.

Cancer is all about the shoreline, tides, monthly and annual, the moon and the sun. The sign of Cancer, ruled by The Moon, is a cardinal sign, herald of the seasons, announcing the arrival of summer in the northern hemisphere and winter in the southern hemisphere.

There is no such thing in reality as THE Cancer personality. Your sun sign is the keynote but it’s not ‘The Story.’ The archetype of the Cancer personality is complex, elusive, and riddled with contradictions.

Cancer stands for both mother and father. It is the zodiac sign of the nurturing parent. Cancer famously adores babies and small animals, all wild things; and struggles with separation. The empty nest is often anathema to the Cancer parent.

Cancer is the sign of hearth and home, and expanding this; tribal identity and ancestral legacy, historical, cultural, and genetic. It is the sign of memory, nostalgia, sometimes regrets, and a longing to return to happy childhood haunts- maybe even a rock-pool.

Cancer is in company with other subjects including Nelson Mandela.

Public Image: The Rider-Waite Tarot: The Sign of Cancer is ruled by the Moon but rules during the summer solstice. The Crab, Cancer, is represented here instead by its alter ego; a crayfish

Cancer is highly intuitive, sensitive, receptive, and keeps its cards close to its chest, not so much deliberately, and as a matter of strategy, but because reserve, reticence, and secrecy are what come naturally to the Cancer subject, just as it does to the living creature.

Still, waters run deep. Cancer sees and hears, but does not speak. Verbal communication is not Cancer’s number one operating mode.

Decisions may be based on reasoning that is neither obvious nor apparent to other people but is driven by a gift for lateral thinking, originating solutions to problems from angles that others have not considered.

Cancer is an enigma. But what would a rock-pool be without a crab?