Zodiac Signs Ranked from Most Romantic to Least Romantic 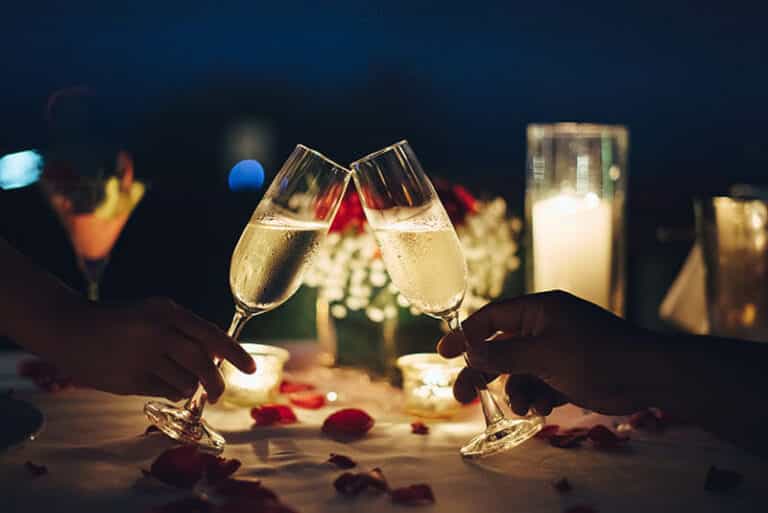 Are you the romantic type? How do you describe your dates with your significant other,’ whether you have a spouse or boyfriend/girlfriend? Do you love having those candlelit dinners in a small and quiet dim room eating delicious food together? Do you then enjoy time together taking a bubble bath while enjoying chocolate and a bubbly? Or does none of that interest you?

Do you spend your dates eating popcorn together while watching some Sci-Fi or action movie? The latter scenario sounds a lot less romantic than the previous one. What determines how romantic you are? Perhaps your zodiac sign has so much to do with that. Let’s take a look at the zodiac signs ranking from the most romantic to the least. Which one ranks the highest?

Libra – All About Relationships and Romance

Is it a surprise that the charming sign that is all about love and relationships would be the most romantic? Absolutely not! Of course, Libra be the one to set up the most romantic dinner settings at home and set up the best bubble baths around. The other thing Libra would do is to tell you how much they love you before they hang up the phone with their lover.

You know the typical scenario of when Libra is ending a phone conversation with their lover by saying ‘I love you more’ after telling Libra that they love them. Therefore, when you go on dates with Libras, expect to be showered with roses, love, romance, and plenty of chocolate.

Pisces – Writing Poetry and Stargazing with Their Significant Other

The best way to describe Pisces is as the hopeless romantic type. You may get candlelit dinners, chocolate, and bubble baths with Pisces, but they’ll be a little more awkward about it. However, what Pisces is known to do quite beautifully is to write romantic poems and read them out to their significant others. Pisces will give you a rose as well.

In addition to that, one thing that Pisces would love to do with their significant other is to go stargazing with them. It is not also out of the realm of possibilities for a Pisces engaged to be married to their lover to say awkward things while stargazing. One example would be ‘don’t you think that one of those stars represents our future child?’. That is because Pisces would definitely go there.

Leo is the type to overblow everything because that is just in their nature to do that. Even though Leo is not all about romance and relationships the same way as Libra, they know how to put on an excellent romantic show. Even though Leo would not be the type to set up a candlelit dinner setting, they will tell their significant lover how much they dramatically love them. Therefore, Leo dramatizes the romance and acts as if they are going on stage when they talk about how much they love their significant other. Leo would also likely give their lover a large bouquet before they profess their love.

On the flip side, when Leo breaks up with their partner, they would make the breakup a dramatic one too.

Taurus will wine and dine with their significant others in a similar way to Libra. There is a reason for that: beautiful and romantic Venus rules both Taurus and Libra. However, there is a difference. Libra is an air sign, which is why it is all about socializing and relationships. Taurus is an earth sign, which means the sign is all about luxurious items and gourmet food.

Therefore, a Taurus may not tell their significant other how much they love them repeatedly. However, they will wine and dine them with gourmet food, chocolate, and good wine. Either way, Taurus’ partner will feel special.

Gemini – Flirtatious but Romantic with the ‘Right’ One

Based on how unpredictable Gemini is, you may think that this sign could go to the bottom of the list. The last thing you would expect Gemini to be is romantic, but here is the thing: Gemini can be romantic once they know they have the perfect partner for them.

While Gemini is in the early stages of dating their partner, they’ll be flirtatious. However, they won’t give them candlelit dinners and won’t tell them how much they love them. However, once Gemini begins to fall in love and knows that they found their partner for life, then that changes. Therefore, Gemini has a romantic side, but it won’t show up until Gemini knows they found ‘the one.’

Capricorn – Too Shy to Be Romantic Until the Guard Goes Down

Capricorn ranks right in the middle of the list. Initially, Capricorn will not show a romantic side to them when they start a relationship. You will expect from dating a Capricorn to go on dinner dates that involve intelligent and casual conversation. There is no flirting, but you will have a sense that Capricorn enjoys your company. Maybe you will go to a movie after dinner.

However, once Capricorn warms up to you and lets their guard down, then they will show their romantic side. They are not the type to give you roses or candlelit dinners. However, they will tell you that they love you. Secondly, they will surprise you by remembering important anniversary dates that you may forget!

Scorpio – Only Romantic in the Bedroom

If the Scorpio wants to have a romantic dinner with you, it has nothing to do with them wanting to have a fun and loving time with that. Scorpio has other plans that involve what comes after dinner – which is that passionate time in bed.

Cancer – Has a Romantic Streak but Values Security More

Cancer is the most emotional sign in the zodiac. However, it is not a romantic sign. Sure, Cancers can have romantic streaks as they can give you a nice massage in a dim or candlelit room. However, their motivation to do that is to nurture you and to help you feel secure. There is no romantic motivation for that.

Besides, Cancers want security. A perfect date night for them is to cuddle up with you on the sofa and watch a movie on television. That makes them feel secure, which is what they value more than anything else.

Aries – Superficially Romantic Initially Until it Is no Longer Necessary

Aries is an action-oriented sign and is not the type to be interested in a long-term romance. However, that will surprise you because when you begin dating an Aries, they will shower you with romance. An Aries will wine and dine you initially, once they start knowing you. That is their way of showing an interest in developing a relationship with you.

However, once the initial part of the courtship passes and you are in an established relationship – Aries will no longer be interested in being romantic. Aries won you over by showering you with romance, and since they see they succeeded, that part of it will be over. In fact, there is a good chance they can forget an important anniversary later- oops on their part.

Virgo is one of the least romantic signs, so it ranks towards the bottom of the list. If you have a Virgo partner and you swoop them in with romance, they’ll be receptive to it. However, you won’t find a Virgo being the romantic type. Virgos value health and practicality more than romance.

Aquarius – Romance Is too Mainstream for Them

Aquarians are unique, and many of them prefer not to be in a relationship at all. However, several of them do become lonely, especially if they have romantic influences in their horoscope. However, for Aquarians that want to have a partnership, they shun the idea of romance. They see romance as a silly fad and won’t at all be the type to wine and dine you and tell you repeatedly that they love you.

Aquarians will show you in their way that they love you as they will build your confidence instead. They’ll tell you how important it is to value your uniqueness. The most you can get in the romance department from an Aquarian is asking you what you want for Valentine’s Day. They will get you the gift that you wish instead of you surprising you with one.

Sagittarius – Romance Is Not Necessary

Sagittarians are spiritual, and they see romance as something superficial. The most romantic thing you will get from a Sagittarian is them taking you on a surprise adventure that fulfills their adventurous craving. A Sagittarian will go on the adventure alone or with a partner, or a friend. Either way, it makes no difference to them.

However, Sagittarians see romance as fake and fleeting and know it is not something that lasts forever in any relationship. However, there may be a fear hidden as to why romance turns off the Sagittarius too. They don’t like commitment. Sagittarians want to be free, and romance can remind them of being tied down to a relationship. Yet, that does not mean that a Sagittarian is doomed to remain single. If the Sagittarian meets someone who wants to live the same lifestyle as them, then they’ll be happy to commit – without resorting to romance.

However, what if your partner is a Sagittarius or an Aquarius and writes poems for you and surprises you often with chocolate and roses? On the flip side, what if your Pisces partner is just as romantic as their opposing sign, Virgo? That is because their sun sign only makes up a fraction of their horoscope. If their Moon or rising sign is in any of the top three most romantic signs, that explains it. Additionally, they may have a fifth house, stellium, which is the romantic house.

And if your Libra partner is not romantic at all, then check their rising and Moon sign. If they fall in Aquarius, Sagittarius, or Virgo, then that would explain that too.

How Do the Star Signs Hustle?

The Numerology of Meghan Markle