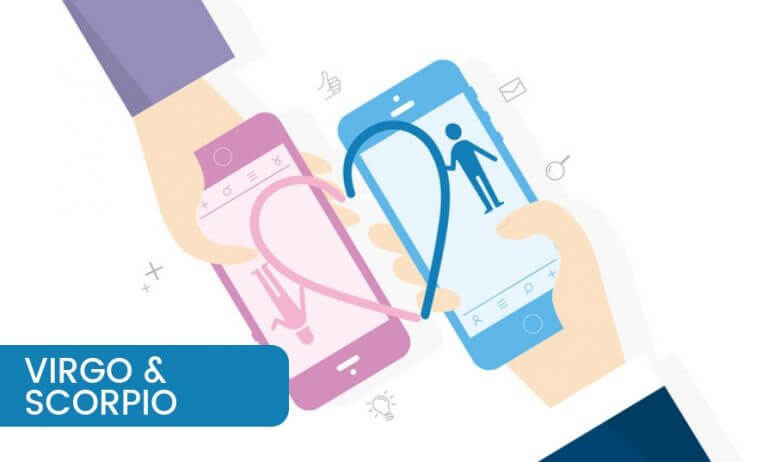 Ever wonder about a relationship that is not necessarily perfect in all aspects, but has enough credit to make it run for a lifetime? Well, one between Virgo and Scorpio is just that. Let us explain. In all the factors that are usually judged to declare two signs compatible, Virgo compatibility with Scorpio is not excellent. However, it exceeds expectations. We hope you understand better with this analogy.

At this page, we hope to explain the zodiac compatibility between Virgo and Scorpio, along with the factors that lead to such a result. This would include an insight into the very basic rules of astrology, and how they are used in determining a compatible relationship, with reference to Virgo and Scorpio. But before we move on to anything, let us clear the air about a very important issue.

Now that we have all disclaimers set let us move on to the first issue which basically determines the existence of dating compatibility. Yes, it is sex and intimacy that we are talking about. Like we mentioned before, nothing in this relationship is a top scorer; however, everything tends to get by with respectable positions. In sex and intimacy, the situation is not that bad, to be honest.

All of this is due to the reason that both of these signs tend to hold up a lot of emotion in them. While this acts as a control barrier for sex because, after all, who wants to cry together in bed, it also moves the two to share a very deep connection whenever they get together sexually. This is particularly rare in among any of the zodiac compatibilities.

With such a bond, both Virgo and Scorpio can be sure that whatever is happening in bed is of the truest intentions possible and does not have one bit of mistrust or cheating in it.

Virgo and Scorpio Compatibility: Is it gender-specific?

While it needs a lot of background and context, let us explain it to the best of our abilities, so it does not get confusing for any people freshly introduced to astrology. It is a person’s specific birth chart that requires the knowledge about their gender. In looking for a zodiac love match, the priority is set on finding mutual elements from two different birth charts. So any compatibility factors that we judge below, they hold the same for a Virgo man Scorpio woman couple, as well as a Virgo woman Scorpio man couple.

If there is one thing that would make astrologers declare Scorpio to be the Virgo best love match, it is communication on the part of both the partners. Everyone who has been into astrology would know that Mercury is the planet of communication. Interestingly enough, it is also the ruling planet of Virgo, making it the life of the parties. In this case, however, Mercury tends to showcase its quieter side. This is very different yet very helpful. Astrologers deem it a good omen because Scorpio, being governed by the element of water, has its sense of depth.

To explain this better, like water has depth and silence, Scorpio has too. One can always expect them to sit idly by for hours, thinking about nothing in particular and gazing far into space. Virgo tends to complement this on a very big scale with their quiet talking. This might sound weird, but these two signs then move on to connect on a spiritual level. It is this very quality that gives way to easiness in the bed too. The talks that Virgo and Scorpio mostly share will be intellectual ones, helping each other expand in their minds.

However, one should be careful in only being part of such conversations because they surely might increase your knowledge, but they take away the element of emotional connection at times, leaving only a selfish thirst for knowledge.

The Reasons that lead to Virgo with Scorpio compatibility

While we declared Scorpio to be one of the Virgo compatible signs easily, it is important to know how it went so far. The first reason is pretty simple as it involves zodiac elements. You may understand already how the compatibility between elements works, but for the sake of the new reader, let us recap. Zodiac elements tend to choose their partner element just like they do in nature.

Water goes well with earth, and air supports the energy of fire. In a very fortunate turn of events, Virgo and Scorpio belong to the elements of water and earth, beautifully complementing each other. Water further amplifies the need for earth elements to seek permanent shelter in the coziest place as it becomes a source of supplement.

The second reason is also very important, and we may have provided a little insight to it when we discussed how zodiac compatibilities are not gender-specific, earlier in this article. Scorpio being called the most compatible with Virgo is mainly because of Virgo dates. As mentioned earlier, the comparison of two birth charts involves seeing which planets are in similar positions to determine whether two signs are compatible.

In the case of Virgo and Scorpio, the planets come close to their respective positions and form a very similar pattern on both the birth charts, usually. This gets the great compatibility between these signs not just in communication and sex, but also on fronts like emotions, understanding, and regard for values and traditions.

Whatever the result turns out to be, with this analysis you know what things to look out for in such a relationship. And if you have been facing problems, you know the causes of them now so that you can fix them before their roots become stronger.

Virgo and Scorpio Compatibility
COMPATIBILITY SCORE OVERVIEW
This is an indicative score from other readers. For a more accurate match, it is necessary to do a synastry compatibility calculation.
What percent do they match?70 Votes
67
Pros
Strong emotional understanding
Good communicational power
Can enhance each-other’s sexual skills
Cons
May get selfish regarding certain issues
Thirst for intellectual conversation
Sometimes can be too silent
67
match