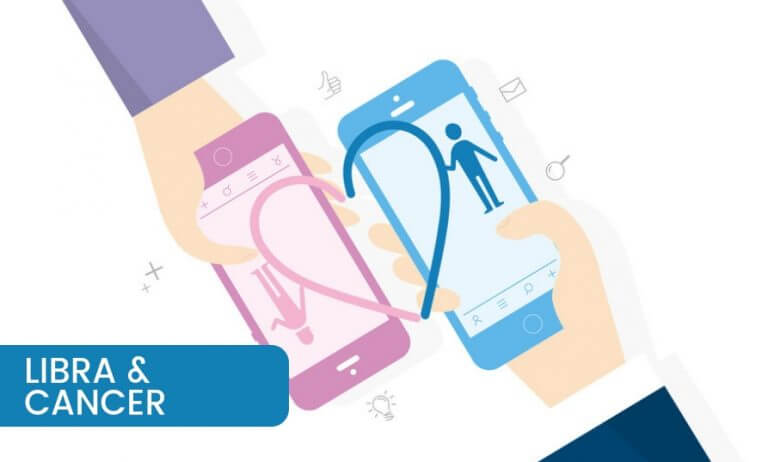 Average might even be an understatement when it comes to Libra compatibility with Cancer in the zodiac calendar. According to many astrologers’ calculations, these two signs tend to perform quite well in all the parameters that are set to judge the compatibility of any relationship. Libra and Cancer show a fondness of each other when it comes to communication and intellect, signaling how they are both at an equal mental level. This, of course, goes on to be a very important plus in favor of their zodiac compatibility.

Before we go on explaining separate ventures that the two zodiac signs are expected to have, let us shed some light on the factors that basically lead up to such situations. These are the parameters that form the basis of any relationship, and it is important to know these to understand the Libra and Cancer compatibility better.

The first reason that effectively deals with determining dating compatibility is that of zodiac elements. It is pretty simple once you get the hang of it. And after you do, it will not be just Libra and Cancer compatibility that you will understand the reasoning behind. Zodiac elements tend to form their own set of compatibility rules that put certain signs in the list of being certain other signs’ zodiac love match. While each element rules over three zodiac signs, it finds a very good chance of compatibility with a set of another three.

The second reason that we will be discussing is what basically gives Libra and Cancer the little amount of compatibility they get since the zodiac elements are completely at war with each other. These are the Libra dates that we are talking about. When looking for a compatible relationship between any two signs, astrologers tend to notice the pattern of planetary positions shown by each of them.

The more similarities they find in each comparison, the more compatible two signs are. In the case of Libra and Cancer, communication is a factor that evidently runs supreme when the comparison of these signs’ dates is done. Apart from that, trust is also a quality that Libra and Cancer couples possess.

Is Libra and Cancer compatibility gender-specific?

Before we move on to commenting separately on how Libra and Cancer fare in a relationship, we believe it is important to address this common misconception. It is indeed important to provide one’s gender when asking for their birth chart. However, when relationship compatibilities come into question, it is not a question of genders anymore.

Any observations that we will be provided below, please be sure to have them verified equally for a Libra man Cancer woman couple as well as a Libra woman Cancer man couple. There might be a few changes in the case of each, but they are not so significant as to give them any special mentions further on.

While astrologers are certain on not giving Cancer the status of a Libra best love match, they tend to agree on the fact that the situation is not totally abysmal. In fact, there are a few chances, and like every relationship demands time, enough time, in this case, may soften up these two signs to the point of great lovemaking too. The main problem arises from the fact that both of these signs are not too keen on accepting the presence of Mars in their natal charts. This leads to a serious lack of passion in their sex life.

However, the key part here can be played by a Libra if he or she wills. Due to the very reserved and secure nature of their personality, a Libra may get to observe their Cancer partner like no one else does. Such observation is the only key to both of the people warming up to each other because they now understand each other at a better level.

Remember when we said it is the zodiac elements that help each sign determine its basic approach towards life? It is this very approach causing trouble in making Cancer the most compatible with Libra. The element of air, which governs over Libra, gives it the heart to fly out wherever it wants to. Generally, air-governed zodiac signs tend to love freedom, liberty, and are very expressive about their opinions, no matter how controversial they might be. Cancer, on the other hand, is ruled by water.

This element brings a literal sense of depth with it, riding on emotions. This is exactly why it does not work out in the end. Emotions can only be countered by understanding, but instead, they meet a revolutionary in the form of Libra. Cancer may want tenderness in a relationship, and what they get instead are energy and loudness. It is these factors that, if worked upon, can lead to Cancer becoming one of the Libra compatible signs.

Libra and Cancer Compatibility
COMPATIBILITY SCORE OVERVIEW
This is an indicative score from other readers. For a more accurate match, it is necessary to do a synastry compatibility calculation.
What percent do they match?37 Votes
71
Pros
Compassion and romantic relationship
Both are Good conversationalists
High sexual compatibility
Cons
May not find common ground
Very opinionated about trivial matters
Arguments can arise from Difference in opinion
71
match