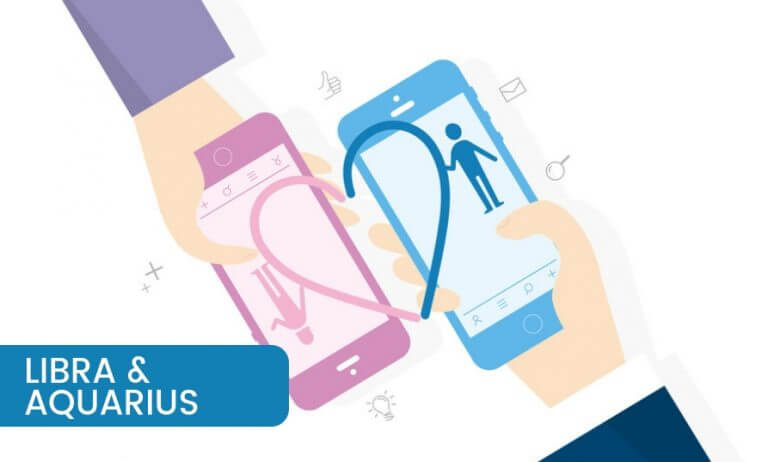 You might also be familiar with the parameters that are set to judge a compatible relationship. These include factors like sexual compatibility, emotional quotient, trust between the two people and such. In a brilliant turn of events, Libra and Aquarius turn out to be a couple that is great at all of these factors.

There are a few hiccups being faced by Libra compatibility with Aquarius in the department of communication, but it is nothing that cannot be worked out.  In this article, let us comment on these factors separately as we try to uncover what a Libra and Aquarius relationship is in its true sense.

Libra and Aquarius Sex and Intimacy

Sexuality is a complex issue for any couple. Nonetheless, it is the starting point for all kinds of dating compatibility charts. After all, if there is no heat generating in the bed between two people, they often see little reason to continue with that particular relationship. Fortunately for Libra and Aquarius, they smash it in bed, in a good way of course. Let us come at this analysis with both signs’ perspective, so you understand better what is at play here.

Aquarius comes in a relationship looking to be satisfied in bed, in all honesty. This gives them a lot of free hand with what they want to do. You may have heard about how shy a Libra person can be; this shyness is greatly countered by an Aquarius as they make their Libra partner feel comfortable in bed. It may become some challenge because of Libra’s shyness too, at times. Being a zodiac love match, after all, is no easy feat. An Aquarius may have to work too hard at times when they want sex while their Libra partner doesn’t (in public places, for instance). Apart from that, these two are like two giant blocks that fit.

Libra and Aquarius Sexuality: The Libra Compatibility Side

This is the tricky part in Libra and Aquarius compatibility. Both being zodiac signs governed by the element of air, Libra and Aquarius both have a tendency to explore new fronts in all departments. When we discussed how a Libra is very shy in nature, it is because of the influence of the Sun. This tends to inculcate in a Libra’s personality, great regard for what people would say in reaction to any action by them. This subconscious worrying of people’s opinions may get them to halt their sexual practices in wild scenarios that an Aquarius might otherwise suggest. But once they give in, both of them enjoy each other to the fullest.

Is Libra and Aquarius compatibility gender-specific?

This, too, is an issue that needs to be addressed before we move on further with this article. Asking about a person’s gender is a common practice when making their birth chart, which shows the positions of the planets on a specific date. However, in zodiac compatibility, it is only a comparison of two different natal/birth charts. Therefore, for example, the sexual intimacy analysis above holds true for a Libra man Aquarius woman couple as much as it holds true for a Libra woman Aquarius man couple.

We discussed how sex and intimacy bring Aquarius to the list of signs that are the most compatible with Libra. Let us now move on to discuss some factors that work against this agenda. While it is nothing that serious, it sure does somewhat hinder the chances of Aquarius being the Libra best love match. This is the parameter of communication. The challenge to communication arises from the basic approach that each sign takes towards life. Libra wants to uphold a certain image in the society, of being applauded by everyone for their philanthropy as well as their light-hearted jokes.

An Aquarius, on the other hand, enjoys going in the exact opposite direction of every person in the room. This may lead to disagreements that are often not appreciated by either. However, these disagreements have an equal chance of disappearing too when, at certain times, the Libra’s habit to be unique in a room matches with an Aquarius’ habit of being the opposite of everyone. In such a case, Aquarius does tend to run back in the list of Libra compatible signs.

Libra with Aquarius: The Reasons that bring them so close

For any zodiac compatibility, two primary factors judge how the overall result would be. These two stem from the very basic concepts of astrology and thus are regarded as the most authentic by astrologers all over the world. The first factor that declares Aquarius to be the Libra best love match is that of Libra dates. For any compatibility to work, it is important that the planetary positions of these two signs match to some extent.

Fortunately for Libra compatibility with Aquarius, a lot of planets, including those responsible for sex, emotions, trust, and shared activities match up in their respective positions.

Similarly, the second reasoning that declares Libra and Aquarius to be the perfect match is that of zodiac elements. It is known among astrologers and people who follow astrology of how zodiac elements tend to form their own pattern of compatibilities. This involves signs with an element of fire favoring signs with an element of air. The same goes for signs of water and earth too.

However, the most successful compatibilities result when there are two similar elements on the charts. Libra and Aquarius both belong to the element of air, making waves. This gives them not just a shared approach towards life, but also similar attitudes towards the problems that might come in their way.

Libra and Aquarius Compatibility
COMPATIBILITY SCORE OVERVIEW
This is an indicative score from other readers. For a more accurate match, it is necessary to do a synastry compatibility calculation.
What percent do they match?58 Votes
71
Pros
Considerable sexual relations
Mutual respect and trust
Great emotional compatibility
Cons
Very poor communication
Hard to face reality
Little to no rational traits
71
match