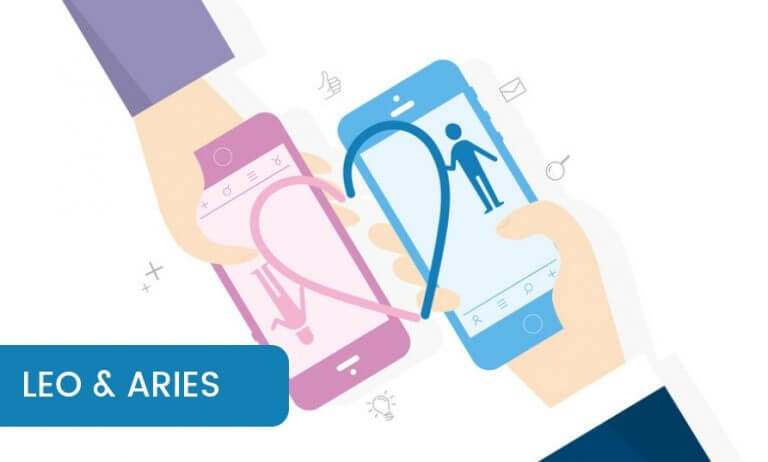 Aries holds a strong Leo compatibility percentage that works in favor of both of their leading traits. The Leo and Aries compatibility grows due to the passion and attraction the signs hold for each other. The zodiac love match of this duo is certainly a super sizzling match of the sublime and the sexual. Due to the emotional nature of Leo and Aries, their relationship is full of extremities that can ruin the relationship in an instance or have a trailblazing and frighteningly strong bond of romance and love.

In Leo and Aries relationship, the Royal archetype collides with the Hero, both of which are dominant personality types. There is a constant power struggle in the zodiac compatibility of Leo and Aries. Moreover, their egos also possess the same quality of independence, where Leo loves to be in control and be the center, while Aries loves to win and be praised for it. Their relationship is under the constant stress of these egos. However, it does not affect the probability of a successful and compatible relationship between the two signs.

Which is the reason why Leo compatible signs often need to have a compromising nature that Aries lacks, it can cause their relationship to blow because neither will back down. If either of the signs missteps and bruises the ego of their partner, you better believe Leo with Aries will lose more than their dignity and confidence.

Leo and Aries Compatibility Based on Emotional Bonds

Not only does this sizzling match have irresistible and exciting inherent attraction, but they also match due to their emotional compatibility. Leo and Aries have the favor of the Sun; they are both passionate and warm in nature. The dating compatibility of this couple surpasses many other matches as they both have a strong connection based on their planetary and elemental relations. The warmth of the Sun pours into the relationship between Leo and Aries, they can understand each other completely because they have the same emotional range and energy.

Most compatible with Leo

The magnitude of this compatibility makes many contrasting traits of Leo and Aries irrelevant as it acts as a cure-all for the imperfections of the signs. This might be the reason why the Aries and Leo compatibility holds steadfast without losing its balance and stability. Each sign possess a trait that the other lacks, it helps them grow as a couple and endure the hardships of life.  Aries is most compatible with Leo, in this case, because they possess a tenderness that Leo lacks, while Aries learns perseverance and tenacity from their Leo partner. The tenderness and perseverance in a Leo and Aries relationship tend to be the cause of a long and affectionate relationship.

In such a fiery and passionate bond, there tends to be many ups and downs, which can be easily solved by compromising. In contrast, Leo and Aries do not tend to back down during these fights, both signs love to win over the other. The good thing is, there is a vast ocean of respect and love for these two, which allows them to move past their differences. The fights between the two won’t be small but they won’t as bad either.

The love and respect grow through their romantic bond that is filled with passionate and sensual moments. When a Leo dates an Aries partner, they will enjoy an incredibly passionate relationship that will try to up the pace each time they meet. They will have a strong sexual connection due to Leo’s fiery and enthusiastic nature, while it will persist as the same because of Aries tenacious nature.

One thing that we can be sure of is that when a Leo man dates an Aries woman, there will be a lot of passionate moments accompanied by emotional depth. Aries woman has a very independent personality that does not need reassurance constantly nor do they let their partner flatter them into submission. She will also provide love and affection to their Leo partner faithfully.

Similarly, the Leo man has a faithful and loyal heart, he needs constant affection and attention from their partners. He cannot be the confident and tenacious man that he is without their partner pushing them up all the way. For this reason, Aries woman is not a Leo best love match because they will stubbornly deny the dose of flattery that their Leo partner needs.

The power struggle of this zodiac love match makes itself known in the Leo woman Aries man combination. Initially, the Aries man is attracted to the confident and warm nature of a Leo woman, in response, she is flattered by his competent assertiveness that he shows by making a move. The problem arises when the Aries man tried to control the relationship, which the Leo woman cannot stand. She needs a man that can admire and love her that’s about it, Aries is far too selfish on this account and can ruin the chances of a compatible relationship.

Aries and Leo compatibility gives many allowances to this couple, it makes the process of dating and becoming romantically involved far easier than many other signs. Leo and Aries can form a spicy relationship, a bit volatile, but it can have a long-lasting life of its own if it’s given a proper foundation. The foundation of a Leo and Aries relationship is a compromise on the little nuances that complicates their extremely compatible relationship.

Leo and Aries Compatibility
COMPATIBILITY SCORE OVERVIEW
This is an indicative score from other readers. For a more accurate match, it is necessary to do a synastry compatibility calculation.
What percent do they match?67 Votes
69
Pros
Intimate and sincere
Equally energetic
Fiery and passionate
Cons
Have constant quarrels in their relationship
Compromises are needed for stability
Missteps will bruise ego easily
69
match