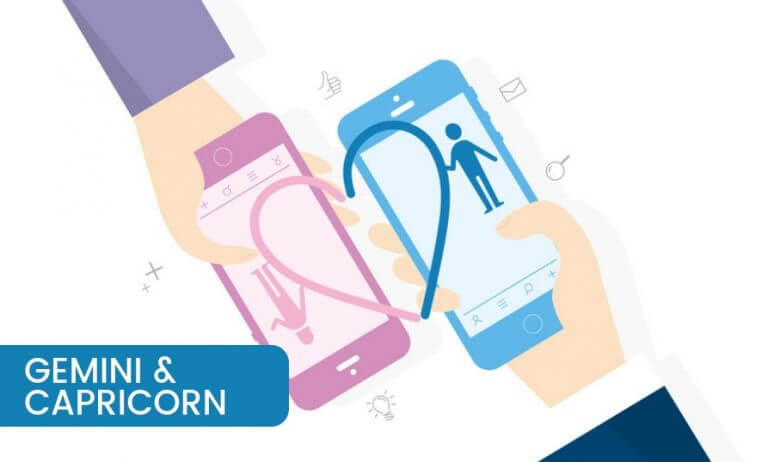 It is no surprise that it doesn’t work out regarding relationships when it comes to a Gemini and Capricorn combination. Astrologers the world over have been studying the patterns of the celestial bodies for centuries now to come to such decisions. And in terms of Gemini compatibility, Capricorn can safely be assumed to earn the status of not the most compatible with Gemini. Zodiac compatibility is a tricky business in itself, as it has to be derived from the basic laws of astrology and does not really have a to-go policy to it.

However, with ages of knowledge being transferred (and constantly improved) it has become somewhat concrete now as to which signs tend to favor which. Let us go a bit deeper into the reasons that determine a weak Gemini and Capricorn compatibility after which we explain the various traits that these two show.

When you go to an astrologer to know more about your personality, the future, or zodiac compatibility prospects, for instance, the first thing you are asked of is your date of birth. This goes on to show how important Gemini dates are in determining their compatibility with Capricorn. In order for you to find your zodiac love match, both of the people in a relationship must have similar planetary positions in their natal charts to some extent, at least.

It is totally understandable that no two natal charts can be completely alike, however, achieving near perfection in the positions of the planets has always been one of the primary attempts behind a compatible relationship. Dating compatibility can thus be easily put on the shoulders of zodiac dates.

The Other Reason that determines a Gemini with Capricorn match

Ever heard of water and fire living together? Pretty much the same is the case with Gemini and Capricorn. As it happens, Gemini compatibility is greatly reliant on a matching of zodiac elements in their true sense, just like the compatibility for any other sign. As the theory goes, out of the four zodiac signs (earth, fire, air, and water) only a few tend to favor the other few.

To easily understand who goes in favor of whom, one has to recall how things go about in nature. Just like fire and water do not go together, earth and air do not too. Coincidentally, air and earth are the very signs of Gemini and Capricorn too, respectively. This is one more reason that stops these two signs from becoming the zodiac love match for each other.

Gemini and Capricorn Compatibility in terms of Sexual Intimacy

When we establish that two signs are not compatible with each other, we mean there are a lot of factors in which their preferences differ. This includes the two people’s approach towards life, their general interests, and the likes.

However, as any astrologer or any common person too, for that matter, would tell you, the first step towards a stable relationship is closure and sexual intimacy. This first rung of the ladder for Gemini and Capricorn, unfortunately, is totally broken. In fact, that ladder is in such a bad condition that it might not even stand against the wall for long.

Focusing only on the sexual life, for now, however, we get to know that a Capricorn does not really think of sex as an important need of man. On the other hand, Geminis are sometimes described as carnal animals in their personalities. At a point where these two feelings collide, what does NOT emerge is a Gemini best love match.

Gemini compatible signs tend to favor freedom, liberty, and a desire to get exposure all the time. Due to such tendencies, it gets troubling because Capricorn is a sign that favors permanence, settling down, and all things opposite to what Gemini wants from life.

This reflects in a Gemini man Capricorn woman companionship as both clearly lack a common ground to channel their emotions and regard for values. It is quite perplexing because when exposed to other signs, Gemini and Capricorn both have a tendency to show emotions. However, when both of them have to confront each other, it all becomes completely dry so quick you will not even need a towel.

The same goes for their regard for values. The surprise lies in the fact that while both have great admiration for certain qualities and values in other people, these admirations are each for a different set of qualities. While one favors outer beauty, the other favors discipline in a person. This conflict goes on to further divide the two if by any chance a Capricorn gets to try their hands at Gemini compatibility for so long.

This combination is not much different either. However, there may be some hope in that regard. It is the factor of trust which brings Gemini and Capricorn a little closer to each other. However, this closure is nothing to get excited about. While the openness of a Gemini person, coupled with their takes on humor which may sometimes involve adult content is taken as humor by many, a Capricorn might downright be offended by it because of their self-righteous and pious behavior. However, both of these people do tend to connect at one point in terms of the trust.

A Gemini is a person who will go for many of their decisions without much thought, based on impulse, whereas a Capricorn tends to put their brains in the gears before making any decisions. This ability lets them think ahead of how their Gemini partner would react in a certain situation. While many people call this an unfair advantage, this is perhaps the only thing that lets a Capricorn trust a Gemini because they already know what they will do in any situation.

Such are the complexities of Gemini compatibility. However, we sure hope this was enough to put it all into perspective for you.

Gemini and Capricorn Compatibility
COMPATIBILITY SCORE OVERVIEW
This is an indicative score. For a more accurate match, it is necessary to do a synastry compatibility calculation.
What percent do they match?33 Votes
72
Pros
Corresponding views on life
Matching interests
High sexual compatibility
Cons
Devoid of emotions causes lack of compassion
Abundance of straightforwardness can cause issues
Polar opposites when expressing feelings
72
match