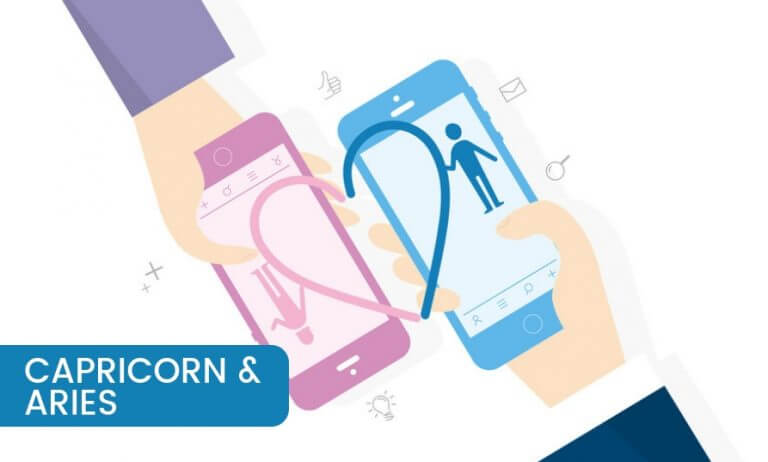 This relationship which exists between Capricorn and Aries is not an easy relationship. Nor Capricorn, neither Aries, possess any traits of blissful and lightness ignorance. This is one of the main reasons as to why their relationship may look like a competition to ruin this relationship in the best possible way.

After viewing Capricorn compatibility with Aries, it is very hard to decide that which one of the two will come out as a winner from this relationship as both of them will feel awful most of the time when they are committed to each other, and they will only be relieved when they get separated.

If they are insanely in love with each other and decide to stay committed to each other no matter what then in a couple of years both Capricorn and Aries will be banging their heads against the wall. Their zodiac compatibility tells us that Capricorn will not have a compatible relationship with an Aries partner, so they need to think wisely before deciding this might ruin the lives of both the partners. The only chance when they will have a successful relationship is they show unconditional wideness and respect towards the partner of their expectations and views, but this again is very rare.

Trust between Capricorn and Aries

It is easy for this particular couple to trust their partner easily because Capricorn and Aries both are “all or nothing” and extreme types of people. Even if they have big misunderstandings regarding other matters in their relationship, it is very rare that Capricorn and Aries will betray the trust of one another. But this is something that they would easily take granted for when both of them are together and committed to each other. They tend to lose awareness of things that need to be treasured. However, it is necessary for this couple to remind each other from time to time about the qualities that their bond includes if they desire to have a successful relationship.

Capricorn compatibility with Aries in a relationship

Capricorn with Aries is a very difficult sort of relationship that will not last for a long time. To make things work between these two can be very trying most of the time but this is not impossible. Capricorn being an earthly sign can protect their Aries partner by providing them with a safe place to land. Both Capricorn and Aries are mature enough to understand that it is necessary to give the space they need at times to their partner as they need to be free for a while without taking this too personally.

And because the Capricorn is firmly planted into the ground and are very sensible with these qualities, Capricorn can bring much-needed stability in the life of their Aries partner. Since both of them are lovers of finer things, so they possess a mutual enthusiasm for visiting new restaurants in town, traveling to exotic destinations and dressing up with fine tailoring outfits. This tells us that they will have amazing dating compatibility because of their mutual interests.

When we take a close look at Capricorn dates, they tell us that Capricorn woman possess strong business-like qualities and Aries man, on the other hand, possess leadership qualities where they want to lead in all the fields of life. One might think after knowing these facts that this particular relationship will end up making the best partnership for business. Yes, this might be the case, but this relationship will also be lacking romance. Capricorn woman Aries man and Capricorn man Aries woman compatibility can be very strong mainly because a Capricorn appears to be very strong than she is.

The relationship between Capricorn and Aries lacks emotions. Their problem is of understanding and the image that they portray of each other when they first meet them. Initially when they enter into a relationship both of them has an image of their partner that they would want to become as they grow. But the main problem here is that neither of them wants to change. No matter how unrealistic their first image is, their emotions will be easily connected on the basis of that. So, this is exactly due to lack of understating between the two which leads to a low Capricorn compatibility with their Aries partner.

Their problem is not lack of emotions, but the major reason due to which their relationship actually lacks behind is lack of understanding which exists between Capricorn and Aries. Because of this, there is also a lack of acceptance of each other because they never want to change the first image that they have formed regarding their partner. Both of them are often too narrow-minded and stubborn to admit that there is something different as compared to that fits in their boundaries of personal characteristics.

More about Capricorn compatibility with Aries

So, when a Capricorn decides to enter a relationship, then it should look for a partner who belongs to any of these zodiac signs as they are considered to be Capricorn best love match if they want to have a successful relationship in the long term.

Capricorn and Aries Compatibility
COMPATIBILITY SCORE OVERVIEW
This is an indicative score from other readers. For a more accurate match, it is necessary to do a synastry compatibility calculation.
What percent do they match?40 Votes
65
Pros
Fantastic individual qualities
Mutually strong
Both possess maturity
Cons
Not accepting of the diverse personalities
Highly incompatible with one another
Condescending of each other
65
match