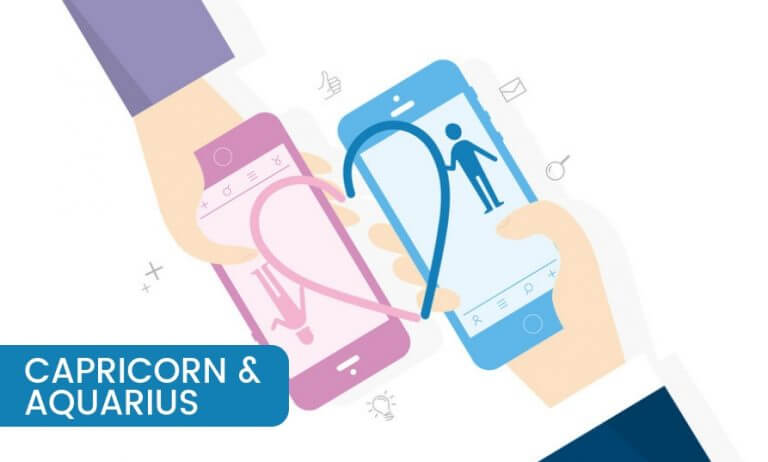 In a compatible relationship, Capricorn and Aquarius bring out the positive characteristics of each other. Capricorn is very careful and looks at life very realistically and logically. Aquarius, on the other hand, has an idealistic approach towards life. Initially, people do not see them as the couple that would click or get along, but once they start loving one another, they form a bond that never breaks.

The zodiac love match, Capricorn and Aquarius is so opinionated that sometimes they find it difficult to make a compromise. Capricorn loves being organized all the time and always has an eye on outcomes or consequences. Similarly, Aquarius is modern and does not like a monotonous routine. Capricorn would love their Aquarius partner but might get irritated when their partner becomes too dreamy and less logical.

Aquarius too will not like their Capricorn partner being all dominant. However, Aquarius appreciates Capricorn being the stronger one in a relationship. Aquarius would want someone to take charge of their matters. Overall, Aquarius has the potential to become Capricorn best love match.

Capricorn and Aquarius also have a lot to learn from one another. Capricorn will teach Aquarius the importance of rationality, organization, and comfort. Aquarius can teach Capricorn the importance of dreams and the courage to stand for what they believe in. Hence, their dating compatibility is likely to be good too.

A Capricorn man is very ambitious yet patient. He yearns for self-discipline and stability. While he prefers to stay alone, he loves being admired and accepted by people. What Capricorn man lacks in is generosity and expressing. He follows a routine and does not like changes, and this is where the Capricorn man might come in conflict with the Aquarius woman. In a relationship, he is very loving and caring and tends to overlook most of the qualities of his partner.

On the other, an Aquarius woman tends to live in her world and is pretty much detached from the world. She also easily adapts to changing conditions and hence, is very flexible. Sometimes she is so good with predictions and intuitions, that it all becomes really scary. She usually does not pay attention to little details, and this is where her intuition tells her if anything is likely to go wrong or not in her favor.

This is also why it is completely impossible to lie or cheat on an Aquarius woman. She would know if something is wrong or unusual. She is also mostly mistaken by people as being all dreamy and less realistic. However, this is not true; she is as close to reality as any other sign.

A Capricorn is extremely individualistic and has her ideas and opinions that she prefers to stick with. However, she is not very open about that because she does not like being judged or given harsh comments. Generally, she is smart and well capable of handling all the situations without allowing her emotions to interfere. This is to say she is emotionally stable and extremely charming and loyal too. She is very responsible and makes sure not to hurt anyone. Regarding a relationship, she is sometimes seen as very demanding for she would want her partner to do exactly what he is supposed to do and nothing less.

On the other hand, an Aquarius man is very honest and only says what he genuinely means. He is capable of knowing the past, present, and future well that helps to obtain great outcomes. Moreover, he is very intelligent and logical in his thinking. He is also traditional and values long-term relationships. He likes to socialize and has a lot of acquaintances and friends. Yet, he likes some alone time and being detached from the world. One can say that an Aquarius has many layers.

Aquarius values freedom while Capricorn values boundaries and this why people think they can never fall in love. People forget that Capricorn and Aquarius is ruled by the Planet Jupiter, the planet that can always make things work. When Capricorn and Aquarius start to understand one another, they would realize they value many of the same things. For instance, both the zodiac signs value loyalty, consistency, and value the same level of humanity needed to help people around them. In a relationship, Capricorn and Aquarius would set their limits and commitments and would not allow anyone to dominate them in any way.

More about Capricorn and Aquarius Compatibility

Aquarius is a fixed sign while Capricorn a cardinal sign. Capricorn and Aquarius both can be opinionated, cold and stubborn. They end up getting whatever they desire. Once they have a plan or goal, they would stick to it until they have accomplished it. Capricorn likes to come up with ideas and get done with incomplete tasks. Aquarius is very helpful and would help their Capricorn partner where needed.

Capricorn and Aquarius Compatibility
COMPATIBILITY SCORE OVERVIEW
This is an indicative score from other readers. For a more accurate match, it is necessary to do a synastry compatibility calculation.
What percent do they match?52 Votes
75
Pros
Equally opinionated
Ambitious yet patient
Extremely individualistic
Cons
Aquarius does not appreciate dominance
Can be difficult to find a compromise
Capricorn gets irritated with the dreamy nature
75
match