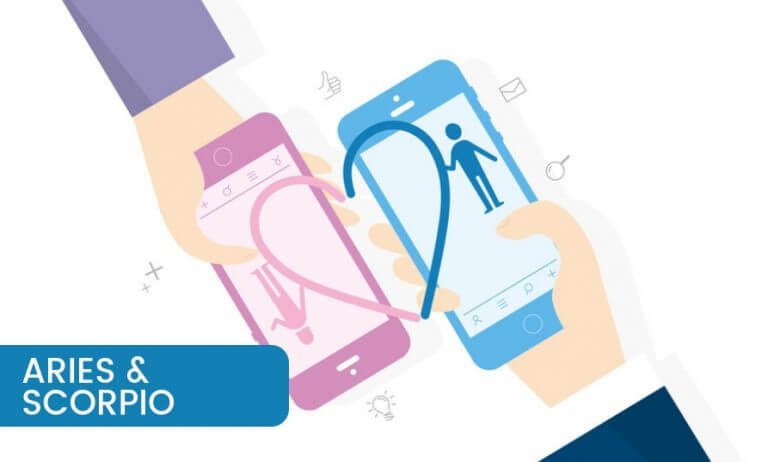 The Aries zodiac sign enforces physical strength, while the Scorpio zodiac sign enforces the traits of physical impulse and power in their personalities. Both signs show a forceful nature behind a calm personality that has passionate undertones. Here is where the conundrum makes itself known, how do two forceful personalities with very different traits find a neutral ground where they can sow a budding relationship.

The Scorpio and Aries compatibility rears its head during the initial stages of a partnership, where Scorpio will try to play a psychological game with their affection as the prize and the Aries will follow suit. Each will be playing a game of love and war that could end up leading them to date each other; this is where the zodiac compatibility is visible.

Aries and Scorpio: A Tale of Fiery Spirits

The dynamics between an Aries and Scorpio couples can be of the trickier sort; it can bring two strangers together without any history. Both of these signs work together well because of their fiery nature that can be grown as a strong connection. An Aries best love match must learn to accommodate and give in a little to Aries’s fiery nature.

When an Aries dates a Scorpio, they are led to form unbreakable bonds. They are often called two sides of the same coin as they are both ruled by their instincts. While the instinctual traits form their strongest bonds together, they can also form a compatible relationship because of the radical traits of Aries that bring the suppressed fire of Scorpio out of their bonds.

The relationship compatibility of Aries and Scorpio is one to be desired; they bring a combination of instinctual nature and passion to the bonds they form. Both of the signs are ruled by the same planet and focus on sexuality and body; they yearn for the same devotion to become compatible signs.

In a marital or sexual bond, the Scorpio and Aries compatibility booms to its height as they become the most sexual and instinctual zodiac love match from the whole bunch. The Scorpio, being a water sign, yearns for depths and passion, while the Aries, being a fire sign, yearns for excitement and passion. You can wonder what the result would be; they experience a true zodiac love match with dragging their partner to become lethargic and bored in a marriage.

There are many passionate opportunities for an Aries with a Scorpio partner, their partnership blooms due to their instinctual nature that works in favor for their relationship compatibility. There is a strong connection between an Aries Man and a Scorpio Woman; the Aries man holds strengthened willpower that attracts a Scorpio woman. The serious and aggressive nature of an Aries man can be hard to deal with; the Scorpio sign finds balance in this nature in mysterious ways to become a very well established Aries compatible signs. The attraction between Aries and Scorpio partnerships grows on the mysterious nature of the Aries man and the fragmented needfulness of the Scorpio woman.

The Aries Woman is known to be independent and has strong personalities; they love to initiate and to take control of a relationship. The Scorpio man yearns for intensity and a mettlesome woman, which is a profound trait of an Aries Woman. The zodiac compatibility of an Aries and Scorpion match can bring a long-lasting love between the two as they thrive on the needy and giving natures of each other.  An Aries woman and a Scorpion man can develop their relations easier than its counterpart because of the puzzle-like traits of the two that fit perfectly together to create relationship compatibility.

Aries and Scorpio Relationship: The Pros

There is a steamy combination of lust and love in a Scorpio and Aries relationship; this combination brings the dating compatibility near the sky. An Aries with Scorpio partner can create a fiery match of personalities that build upon the extraordinary connection of traits. Such a partnership will bring heightened physical energies into play that will teach the other to become more complacent about each other’s needs. The Scorpio sign will enjoy the new found excitement that the Aries partner will bring in the partnership, making them most compatible with Aries.

While the Aries partner will explore the unconscious world of their Scorpio partner as their relationship grows. This zodiac love match thrives on the trust and possessive nature; it should be upheld by the two parties to have a long-lasting relationship.

Aries and Scorpio Relationship: The Cons

An Aries and Scorpio couple can have a fiery and passionate initial contact, but they can fizzle out and die just as quick. This fallout is due to the temperamental nature of the two signs, the Scorpio and Aries compatibility can flare up during these disputes. Their worst traits that have the lowest zodiac compatibility will butt heads. Often, Scorpio will smother and obsess over their partners, which most start signs can handle, but the Aries sign cannot. The Aries independent personality can cause strife as the Scorpio tries to micro-manage their lives.

Moreover, the Aries and Scorpio sign both hold one of the highest levels of jealousy trait that can cause them problems later on, unless a true foundation has not been laid.

The planets representing the traits of Aries and Scorpio zodiac sign can make or break the whole partnership. The Aries and Scorpio sign is ruled by their planet’s representation, power, and war, respectively. These aggressive traits can be overcome with one common and powerful trait that they possess that is Trust. As long as the Aries and Scorpio partners uphold loyalty and trust in their relationship, they can thrive and grow as a zodiac love match.

Aries and Scorpio Compatibility
COMPATIBILITY SCORE OVERVIEW
This is an indicative score from other readers. For a more accurate match, it is necessary to do a synastry compatibility calculation.
What percent do they match?82 Votes
71
Pros
Work well together
Unbreakable bonds
Similar devotion
Cons
Forceful personalities
High levels of jealousy
Initial passion can die
71