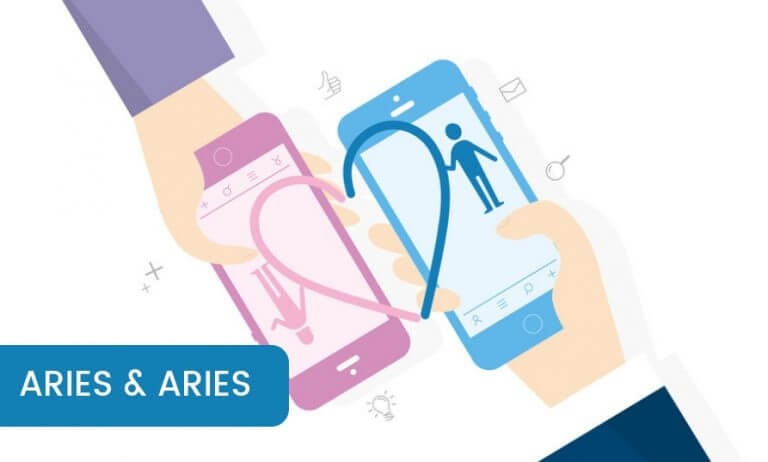 One thing that is very much certain about Aries compatibility with Aries is that they can never be boring. When these two are in a relationship both of them will shine bright like a diamond but will eventually crash in cosmic chaos. These fiery creatures are capable of achieving a lot when they are together as they are always on the go and are planning the next adventure together.

Only if Aries and Aries are willing to have a long-term relationship, then only for Aries compatibility to be extraordinary with their Aries partner, it is essential for them to be gentle enough to listen to their partner and also to step out of their egos when needed to save their relationship.

When you make a match of Aries and Aries, then this is precisely what happens when you put born leaders together with each other to set the world on fire and succeed in all the areas of life. But does this mean that your love life will also be the same as that of the fourth of July? Then this might not be the case always. So, it would not be certain to say that Aries and Aries will make the most suitable zodiac love match.

When talking about Aries compatibility with their partner, trust is an important element. It is for a fact that if Aries is not honest to their partner, then they tend to get angry and defensive quite frequently. So now one can imagine how two Aries would look like if both of them are not honest with each other. If this is the case, then they would look pretty much like children who are fighting at the playground about literally nothing at all.

This is Aries way of reducing their feeling of guilt with their partner where they develop some unnatural closeness with their partner in this manner. With that stated, we can certainly claim that if both of them remain truthful to each other, they can pull off a very compatible relationship because in this manner both of them will share the same goal which is trust.

Aries Compatibility with Aries in a Relationship

There are instances when Aries will be brutally honest with their Aries partner. This, however, is not a bad thing because they do not believe in lying around to save someone’s feelings or dancing around subject matters. But it is only when constructive criticism kicks in between the two that they attack with and say to each other which cannot be taken back.

Aries and Aries will push each other to make them a better version of themselves as for not caring about what other people think about them and for all their talks regarding independence. They tend to be very supportive partners who are always there to celebrate the success of their partner.

When talking about the relationship of Aries man Aries woman there are only two ways in which this could go, either it can be that Aries man meets Aries woman and everyone starts yelling at them to get a room only after 10 minutes of knowing each other. Or they appear to fall in hate with each other just which is just based on their first impression.

So, Aries tend to make Aries best love match and have excellent dating compatibility but only if the first impression does not ruin that they get off each other.

7 Tips on How to Attract an Aries Man

Aries because of their impatient nature cannot be said that they are very emotional. However, for an Aries, there is no better option than another Aries to understand how unreliable their assumption is. As the Aries dates that begin from March 21 and goes up to April 20 (approximate dates) these are the dates that belong to the fire sign, because of this Aries are passionate and warm but still it can be a little difficult in order to understand of their soft side because of their seemingly more solid like and masculine nature. Because Aries and Aries speak and understand the same language, they are capable of sharing deep emotions with each other.

With this match, it is not entirely impossible to have an emotional relationship between the two. However, it can turn out to be difficult for both the parties at times to remain strong, independent and true to their selves.

More about Aries and Aries Compatibility

When Aries and Aries fall in love with each other, it is for no surprise that they can turn out to be the best match on earth. When these two are together both of them will be seen involved in some crazy activities as they will seek out adrenaline together. However, there are high chances that when Aries and Aries get committed, they might disappear from their friends as when both of them are together, they surely do not have room for someone else.

Initially, there will be challenges which they will have to face. Because of the competitive nature of these signs falling in love with each other may not be less than a battle.

However, apart from this, other Aries compatible signs include as that of Leo, Gemini, Sagittarius, and Virgo. These are the particular signs that are considered to be most compatible with Aries.

Aries and Aries Compatibility
Compatibility Score Overview
This is an indicative score from other readers. For a more accurate match, it is necessary to do a synastry compatibility calculation.
What percent do they match?100 Votes
77
Pros
Honest
Supportive
Outgoing
Cons
Impatient
Get defensively quickly
Lack of emotion
77
match