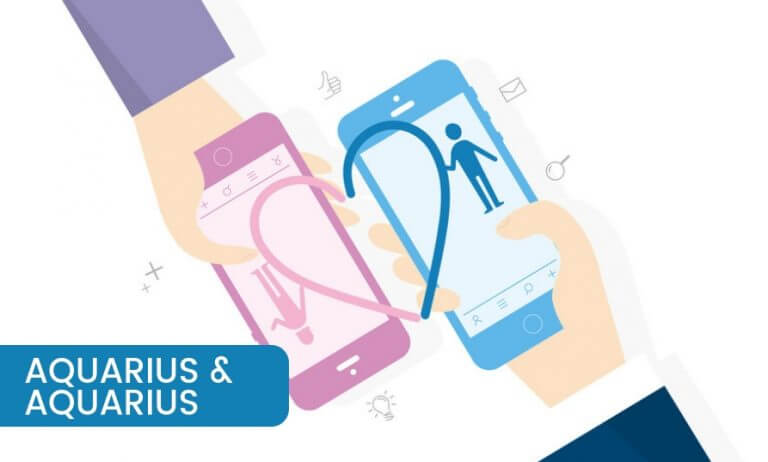 There is a very specific pattern that zodiac compatibility follows when it comes to same sign partnerships. You may have guessed it already. Most of the factors involved in their relationship perform to their fullest. This is because they have the support of all the basic rules that form the foundation pillars of astrology. When it comes to Aquarius and Aquarius, finding a zodiac love match does not look so hard anymore. But just like any other compatible relationship, Aquarius compatibility with Aquarius to has its own, fair share of hiccups that may cause a rift between the two partners. Once the two partners realize what these problems are and how to avoid them, there is nothing that could declare one to be an Aquarius best love match.

The basic astrology factors that contribute to such compatibilities include zodiac elements, as well as the planetary positions. Fortunately, it is a case of the same sign partnership, the element is basically one and only for Aquarius. In addition to that, Aquarius dates also harbor the planets in a position that is only favorable to itself. The only hiccups one might expect of an Aquarius and Aquarius relationship may result from the two people being so alike that they might not be able to withstand themselves at times. Let us move on to commenting on each of the many dynamics that form the basis of any relationship, and how they hold up in the case of Aquarius and Aquarius.

Aquarius and Aquarius – Sex and Intimacy

As any astrologer would tell you, the starting point to check for any signs of dating compatibility is looking for understanding in bed between the two. Because if there is no connection these two can feel in bed, it is pretty hard for them to move on and function as one unit in other walks of life. Aquarius with Aquarius emerges as just an average couple in terms of sex and intimacy. This means that while they do feel a certain degree of attraction towards each other, it never happens over the night or at first sight, as many people would want it.

Physical attraction between these two would develop over a certain period when both have known each other significantly well. Once they do, however, there is almost no stopping them as they make each other laugh and cry with pleasure when they get together in bed. Another interesting factor is, since they do not really adhere to the norms of the society, this gets translated into their sexual activities too. Every day they would try something entirely new in the name of love, which is why given time, these two can really rock it!

A further contribution to this fact is added when astrologers state that an Aquarius and Aquarius couple is more likely to perceive each other as friends on an emotional level rather than lovers. While it has its own advantages, people argue that it lacks the sense of duty that one inherently carries for their loved one, or spouse.

Communication puts the sign of Aquarius back in the game of being the most compatible with Aquarius. Some signs, when they communicate, they talk just because they enjoy talking to each other. In the case of Aquarius and Aquarius, it is actually ideas that they exchange. And they do it with such ferocity that ideas are flying everywhere. It is these conversations that any person in the world would like to be a part of, or even just sit down in them while the grownups talk.

However, there may be some instances where there are ego clashes pertaining to the wisdom each person brings to the table. An Aquarius and Aquarius couple needs to keep their egos at bay, always, or they will find themselves in a lot of hot water over issues that concern them the least. After all, who wants to split up arguing over why one political party is better than the other?

Aquarius and Aquarius Trusting Each Other

Trust is a full scorer in this relationship. It is a factor that makes Aquarius one of the best matches for Aquarius. And in principle, it has a very simple theory attached to it. These two have an understanding that few other zodiac signs tend to have. The major part of it exists because of how they are both one and the same, enabling them to be confident that they know their partner inside out. An Aquarius man Aquarius woman couple will find no trouble in trusting each other.

Shared interests are a domain that these two are champions at, again. The zodiac element of air plays a major role here. It leads both the people in the couple to the same destiny, similar interests, and most importantly of all, a similar approach towards life. When both the partners want to be expressive, free and explore the world at whatever chance they can gather, there is little that can come in the way of them being happy together forever. As for the little hiccups, time heals everything.

Aquarius and Aquarius Compatibility
COMPATIBILITY SCORE OVERVIEW
This is an indicative score from other readers. For a more accurate match, it is necessary to do a synastry compatibility calculation.
What percent do they match?60 Votes
75
Pros
Emotionally expressive
Almost identical interests
Good sense of humour
Cons
Compatible yet not for a relationship
Too much similarities become boring
A very satisfactory sexual relationship
75
match