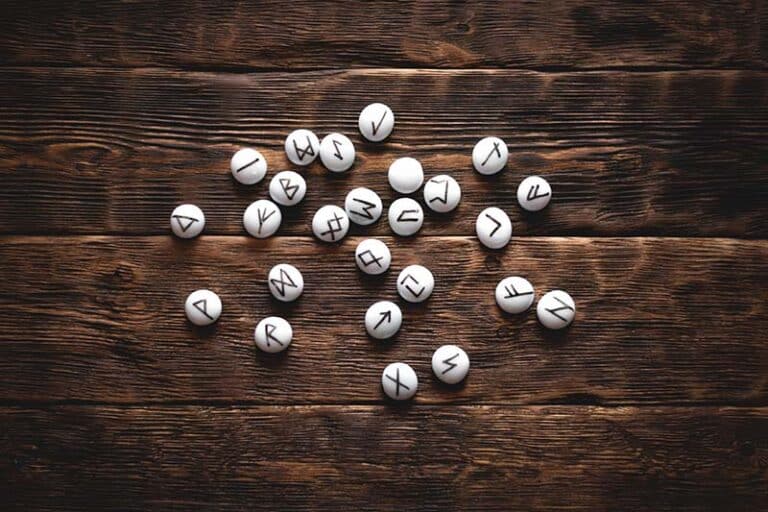 The runes have been described as an ancient alphabet for modern magicians. Unveil and understand rune meanings for the month ahead!

What Are the Runes?

The word ‘rune’ comes from the old Germanic, ‘runa’ or ‘runo’ meaning a secret thing, a mystery. The northern peoples saw the Earth, its forces and all things in nature seen as living forces or spirits to be honored and respected.  The runes were and still are used for psychic readings and advice- divination -or used for magical purposes and good luck – seidr.

Runes were the first systems of writing developed and used by the Norse and other Germanic peoples. These runic alphabets are known as “futharks” after the first six runes (Fehu, Uruz, Thurisaz, Ansuz, Raidho, and Kenaz) – just as the word “alphabet” comes from the names of the first two Semitic letters (Aleph, Beth).

There are three rune alphabets or futharks: the Elder, Younger and Saxon futharks. The 24-character Elder Futhark was the first fully-formed runic alphabet, dating back, so far as we know, to the first century CE/AD, though it may have been in development from about 200 BCE.

Today we are using the alphabet runes of the Elder Futhark, illustrated below.

The more specific the question, the more detailed the rune reading. Here, we have no specific question and the reading is therefore very general. What the reader is doing here is looking for the tone and feel of things, the tone, for challenges, opportunities or guidance contained within the runes.

The reader has used a three rune spread, known as The Norns spread. The number three figured significantly in ancient divinatory practices. The Roman historian Tacitus recorded that this rune spread was in common use 2000 year ago.

It is to be noted that this spread, so far as we know, was traditionally read from right to left.

Who Were The Norns?

The Norns were the Fates of Norse Mythology. Like the Moirai- the Fates of Greek Mythology, they ‘shaped the lives of each man from his first day to his last.’ They were not goddesses exactly, but beings of time. They lived by the Well of Wyrd (Destiny) and their great task was to water the great World Tree, the giant ash tree, Yggdrasil.

Their names were Urd (“What once was”), Skuld (“what is coming into being”) and Verdandi (“what shall be”.)

The runes in this spread are read from right to left

Perthro (Urd: “What Once Was”)

Another name for this rune is ‘paddock’. This is the rune of sanctuary and of secrets, mysteries and occult matters. The rune itself is a mystery. Not a lot is known about it.  The teaching of runes was an oral tradition, known only to a few. Apart from Tacitus, we have few written records or references telling us about the earliest origins and uses of the runes.

The rune is reflecting the fact that we have collectively left behind a long period of  ‘sanctuary;’  a time of relative stability and security in Europe post- World War 2 and after the ending of the Cold War, though now the West is reflecting that the Cold War never actually ended.

We do know that when this rune Perthro surfaces, we are juggling with a lot of questions and uncertainty, which is certainly true for many of us at this time. Perthro begs the question, what makes us feel most secure? Where do we have direct personal control over our own situation? What or who makes us feel less secure? How do we best protect our home- our sanctuary, to maximise its comfort, safety and security so that we can rest and relax in our den? Many people in the world can’t even do that right now, for fear of a missile crashing through the roof, or attackers swooping in, whether in Ukraine or Gaza or many other places.

Perthro means that secrets are revealed, and new information comes to light in the public eye.

Likewise on a personal level, we might make a surprising or startling discovery this month, or we could discover that someone has been sharing our secret information. Perthro suggests we review our online safeguarding of our information.

We could be in for other surprises this September, though this is not necessarily negative. Perthro has been associated with gambling and here, drawn in its positive aspect, this rune could be suggesting we take a small risk this coming month. We may request a pay rise for instance. We may receive a refusal, but often it really is a case of ‘don’t ask, don’t get.’ What is there to lose? This gamble could pay off, literally.

Also on a positive note, Perthro can mean we find something that we’ve been hunting for. Lost items turn up again, or we receive a financial offer, gift or inheritance, usually unexpectedly.

Ingwaz (Skuld: “What is coming into being”)

Ingwaz is also known as Ing. The name means literally ‘god-seed’. This is a powerful, primal rune of fertility, a positive and optimistic rune.

Here it is talking about the fertility of the earth itself, and this coming harvest time. On an obvious material level, this is reflecting events to do with agricultural exports from Ukraine, and the abiding threat of famine, unrest and migration if those exports are blocked by Russia. Grain shipments have now started leaving those blockaded ports, following interventions by Erdogan and the UN but the threat of Putin’s leverage of maritime blockade is still very much present.

Ingwaz is a favourable rune of positive action, suggesting unity, agreements, and peace. It’s just that here, the situation requires a lot of work- just as farming does even at the best of times, to sow, to grow, to reap, and to distribute (export) the harvest.

This is one of several runes that cannot be reversed, meaning it has no negative meaning in its own right, and it looks the same right way up as it does upside down. It has no negative meaning unless it is sandwiched between deeply negative runes. Here, the surrounding runes are tricky, but not dire. The appearance of Ingwaz offers a glimmer of hope for diplomatic efforts to bear some fruit, however small this coming winter, but that will depend on Russia feeling a pressing need to come to the negotiating table.

In our personal lives, this rune can be talking about the men in our lives. Perhaps we will meet someone this month. Or a partner is a top priority or may require a little extra TLC.

Ingwaz signifies birth, whether this is the arrival of children, or we receive a new job offer in the coming weeks, or we experience a burst of energy, and a new project gets off the ground and starts coming together.

If communication with a significant man in your life seems to go cool, however, the next rune, ISA, says you are probably not imagining it. The question is whether it is terminal, or whether you’re just going through a cool patch. These happen in most if not all established relationships at some time or another, and we work through them. But if this is a newer relationship and no commitments have been formalized, then that is usually different, and distancing is a warning sign that this is not a good prospect.

Ingwaz signifies birth, whether this is the arrival of children, or we receive a new job offer in the coming weeks, or we experience a burst of energy and a new project gets off the ground and starts coming together.

By and large, Ingwaz says we have been going through a testing time, but better news is on the horizon, promising at least some good news in September.

The more we sow, in general, the more we can hope to reap. What new seeds will we be sowing?

Isa (Verdandi: “What shall be”)

Isa is the rune of ice and everything that is included in that concept, winter, the cold, things slowing down, silence, things that seem to ‘freeze.’

Looking at this rune from the literal point of view, there is no argument with Isa. Winter shall certainly be coming. It is only late summer, yet world events; economics, the rising cost of living, and the impending energy crisis mean we are already thinking –or need to be thinking and preparing for winter.

We need to plan more carefully than usual for simple measures we can take, safeguarding our warmth and health this winter, with energy prices set to soar to levels not experienced by domestic users for many years.

What can we do for ourselves and our families, coping in the event of cuts in power supplies or rising costs? Some old fashioned style provisioning for starters, that’s what. Hot water bottles, flasks, bed socks, thermal vests, fingerless gloves. LED candles, torches, or if living in a remote, rural location, maybe a camping stove for emergency use (be careful.) Stock the medicine cupboard with vitamin C and D and simple flu remedies.

Isa can signify a state of fatigue where we grind to a standstill. Winter is a resting time for the trees and it affects humans in that way too.

But when we’re dealing with a problem, especially where there is uncertainty or muddle, sparkling Isa can be understood as a diamond of cool, clear clarity, saying we need to take a step back, take a deep breath, analyse a problematic situation and respond with logic. We leave our feelings out of this. Maybe we helped make this mess. Maybe it is a situation that is none of our making. But let’s leave our feelings out of it. What we need is a plan. A strategy. What needs doing first?

In related news, the runes here are echoing something in September’s astrology. Mercury, planet of communications, trade and short distance travel goes retrograde this September for three weeks from 9 September-2 October.

This could be viewed as an astrological equivalent of the rune ISA. There could be a short spell of crossed wires and misunderstandings, things moving more slowly than usual, missed deliveries, event cancellations or travel delays.

The advice here is to check and double check information relating to documents, major purchases, and when making travel plans. We need to do these things anyway as a matter of course, but it is easy to take our eye of the ball, and quite a few people have recently fallen foul of changes to the rules when flying, and have been denied access to the flights they had booked and paid for.

Isa says just be particularly aware of any extra potential for glitches during this coming month.

The New Book of Runes  by Ralph Blum

Futhark. A Handbook of Rune Magic by Edred Thorsson.

The Runes: A practical Guide to their uses in divination and Magick by Lisa Peschel, published Llewellyn