The Wheel of the Year and the 8 Wiccan Sabbats 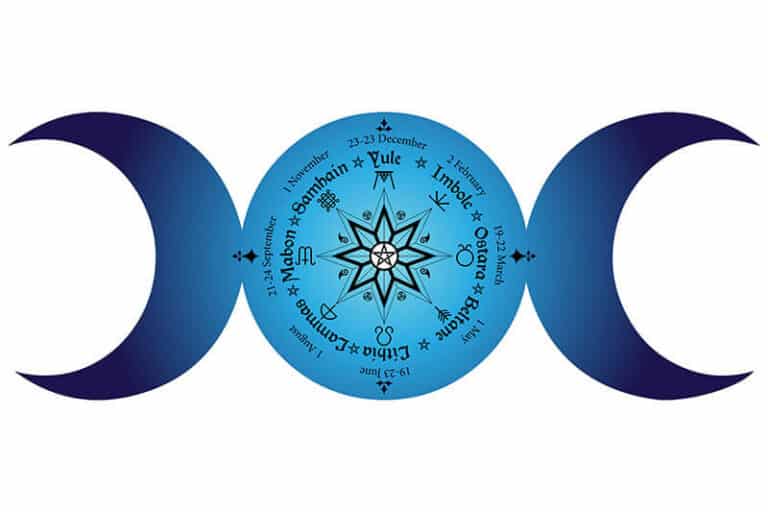 Whether you follow the Wicca faith, keep up with your astrological transits, or simply have knowledge of the seasons- the one thing we all pay attention to is the wheel of the year.

Summer, Winter, Autumn and Spring and all the vibes and festivities they bring.

Every faith has a different take on what the seasons are about, but like religion and teachings of any nature- at the core, there is the only truth. All faiths have the same type of information. So as a brief overview, everything has its place and time in nature.

What does the general structure of each year bring?

The time of new beginnings! Coming out of hibernation! Having the opportunity to reset completely!

At the beginning of Spring- from early February to March, it may be a time where you feel more open-minded and at peace than usual. Aquarius into Pisces season is about tying up loose ends and making nice with the year just gone. It could also be a time where your psychic abilities are heightened.

This time generally sparks an air of creativity in people as there is optimism in the air.

The annual new year takes place in December and the year kicks off in January, as we all know- but I tend to see this time as a pre-game to the main event.

A time where people can collectively acknowledge where they would ideally like their year to go, so they can place a foundation down.

In late March, the energies align.

Aries season kicks off, aligning with Spring Equinox/Ostara (Easter)- and the new year really takes off. Things align and kick start, it often feels like the gates are opened and everyone is pushed out of their little pens as the race begins. There is a sense of enthusiasm in the air as flowers begin to bloom, the sun peeps out, the frost in the air begins to fade into a mild freshness.

Use this time to manifest. Take action. It’s what it was made for.

During this time, we are BUSY.

A lot of the time people may find the darker, colder seasons more challenging but the business and extraverted nature of summer can cause people to find this time particularly difficult.

The majority of retrogrades take place in Summer. Saturn retrogrades in particular, meaning that issues relating to the masculine side of yourself come to the surface.

Rest isn’t a very common theme in the summer despite the abundance of holidays people often take during this time. The only rest people tend to really take is through sickness, as even on holiday the chatter of the mind and they want to be engrained in experiencing life is present.

Summer solstice/ Litha is the sabbat for this holiday where the sun reaches its highest point. The emphasis is on consciousness, the day-to-day of life, what we see at the surface. Who is in your life? What are you waking up for? Are you living as you wanted to be aligned?

September onwards is where things begin to fade. Imbolc is the main sabbat of this season, where we make bread, reap the harvest, and begin to settle rather than buzz. As the leaves change color and become crunchy, the warm hum of the air becomes crisp, and the abundance of wooly clothes fill the shops- the season of the mother is upon us.

The tone of this season is of nurturing. Tending to wounds and tapping into a more emotive and feeling space, as opposed to being active and go-getting. This is the season where shadows are embraced, and inner work is the main focus. Dreams become more vivid and history is more intriguing.

Samhain/Halloween is the height of embracing the shadows, and tradition comes into play.

The more spiritually inclined get to rest after a long season of extraversion.

Now is the perfect time to reflect on the growth that has taken place this year and attend to any wounds you may have acquired.

As the conventional, numeric year draws to an end- festivities and merriment begin to sink in.

It’s a time to show gratitude, counting your blessings, and recognizing areas that you want to work on in the future. Is there an emptiness that you would like to have filled?

It’s a time to call on your loved ones to share their company and take this time as an excuse to wind down with your nearest and dearest.

Wind down meaning- let your hair down.

Yule is a time of warmth and heart space energy. The retrogrades of the year tend to be over, for the most part.

The highs and lows of the season are felt with great impact, but it’s unveiling to you the potential of your life.

Yule takes place in December, but the date varies slightly each year. It begins in the December Solstice and ends 11 days after. Christmas usually takes place during Yule.

This time originates from pagan times and has since evolved into being known as ‘the 12 days of Christmas’.

During the winter solstice we have ‘reached the depths of darkness’- but what we celebrate is the fact that the light comes back. The darkness serves its purpose while it’s here.

Some traditions that people do to connect with the festivity include baking, gift-giving, decorating the house with ivy and holly (to invite nature sprites in to celebrate), and most iconic of all-the burning of the yule log. This was the focal point of Yule in pagan times, as it was considered ceremonial.

This sabbath takes place at the beginning of February, halfway between the winter and spring equinox, and is a preparation for Spring.

It’s a celebration of the light coming back, as we anticipate Spring.

Brigid was the Goddess of pre-Christian Ireland- known as the ‘natural mother of all things’. It holds the promise of renewal and carries the optimism of rebirth.

This time is utilized to let go of the old and set intentions for the new.

Traditions around this time can include literally planting seeds and becoming greener fingered, it can mean spring cleaning, or setting goals and wish-making for the year ahead.

Ostara, now known as ‘Easter’, is the sabbath marking the Spring equinox.

It’s celebrated as the time that the dark and light, masculine and feminine, inner and outer world are in balance. It also marks the moment that the light begins to ‘defeat’ the dark and the days become longer.

It’s celebrated as being a fertile time, perfect for new beginnings. Where actions can take off and preparation is put into practice. This energy is best utilized by getting out of your head and into your body.

Beltane takes place on 1st May and is known as Mayday. It honors the life and represents the peak point of Spring as it transitions into Summer.

This is celebrated as the union of the feminine and masculine and has been a recognized event for centuries, having its own bank holiday.

You may be familiar with the dancing around the maypole, fetes, and social events which are all iconic celebrations for mayday. It’s known as the point where potential becomes conception.

Many people see May as a favorable time to get married as in the past this is where the pagan equivalent of ‘handfasting’ would take place. People who couldn’t afford a handfasting ceremony may ‘jump the broomstick’ instead, signifying moving from an old life to a new one. Whether you include the element of marriage in your association with Beltane or not, jumping the broomstick as a concept is a good metaphor for what this sabbath represents.

Litha usually takes place towards the end of June and it marks midsummer. It’s known as the time where life is at its peak and the sun is at the height of its power. It’s an expansive time full of growth and busy-ness.

It also anticipates the return of the dark. From this point, the Sun begins to wane and the nights grow longer, it’s a time where we can expect to transition into a more restful time.

Traditionally, the story behind midsummer is that this is the time the Oak King is so rich in abundance that he surrenders his reign to his brother, the Holly King. This marks the beginning of the dark side of the year.

It’s traditional to have a bonfire during this time to represent the sun at the peak of its strength.

Lughnasadh (hope and fear) – face your fears, protect, develop your own abilities

Otherwise known as Lammas, this sabbat takes place at the beginning of August and represents the first harvest. It’s a time where we give thanks.

For those of you that are into Greek Mythology, it’s traditionally known as the time where Persephone was taken into the darkness. She represents the grain, that drops into the dark, hidden earth throughout the winter and returns in the Spring as new growth.

The core meaning of this sabbath embraces the turn of the seasons into a more solitary and inwards time after the harvest. While we still enjoy and give thanks to the sun and the harvest, we are ready for the cycle to start again.

This is the second harvest and is celebrated with the great feast of thanksgiving. The newlywed and fresh-faced God and Goddess that we celebrated on Mayday are now mature, grown, and full. It’s the time of rest after the labor of the harvest, where we reap what we have sown and reflected on the hopes and aspirations of Imbolc and Ostara.

It’s a time of completion where we are encouraged to tie up any loose ends and let go of anything, we no longer need to carry with us.

Everybody knows this sabbath. It takes place on 31st October and is known as ‘Halloween’.

Samhain is the division of the year between the summer and the winter. The veils between this world and the otherworld are said to be at their thinnest, allowing spirits and energies to pass through into our conscious world.

People originally wore costumes to ward off and intimidate negative spirits passing through, however now Halloween is celebrated as being fun and exciting- giving us the opportunity to get a thrill of dressing up and indulging in the darkness of capitalized horror.

This is also a time of honoring the dead and paying respects to ancestors who have passed. Some Celtic faiths would see Samhain as the equivalent of a new year.

It’s a time in the year where we are aware that we have entered into the darker side.

Inner work during this time is encouraged and embraced, as we know that we will emerge again to be rebirthed in the Spring.

As you enter the new year and the cycle begins again, what would you like to do?

Seeing Angel Number 909 – What Could That Mean?