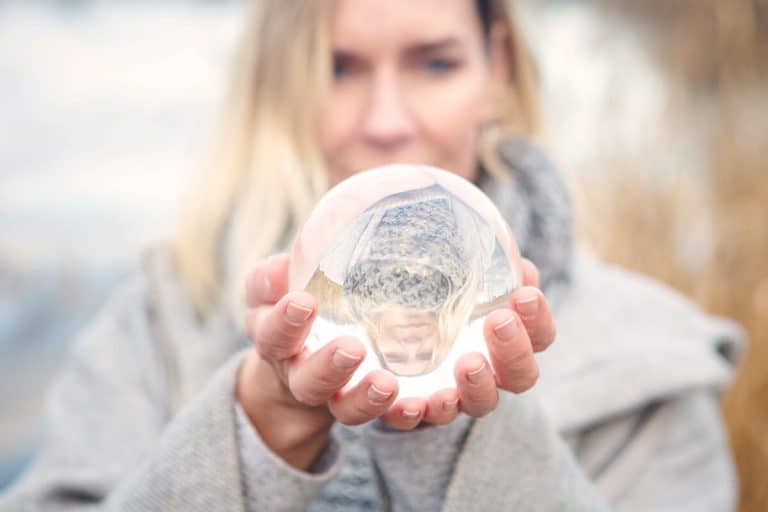 What Are Structured Psychic Readings?

A psychic performing a structured psychic reading employs some type of “divination tool” to divine revelations and clarity about the past, present, or future. The divination tool allows the psychic to receive information from the universe beyond what is normally perceived by the five senses. The tool used by the psychic can be almost anything as it is simply an “antenna” for picking up signals from the cosmos.
During structured psychic readings, the psychic relies on intuition and empathy to interpret the information she is receiving. She must also use her wisdom to explain the information she is receiving to her client in a way that will help them. In a structured psychic reading, it’s the explanations and the clarity this brings that is more important than any predictions. In fact, the client can use the insight from these readings to change their future for the better or come to terms with things that happened in the past. Psychics tend to be wise old souls even when they appear young in age. Their contact with supernatural forces makes them wise well beyond their years.

Tarot readings go back to at least the Middle Ages, although many historians believe they trace back much further than that, at least to when the Egyptians dominated the world. In modern times, tarot symbols are found on tarot cards that the psychic will spread them out in a particular pattern, such as a Celtic cross pattern or a tree of life pattern. She will then use the Tarot images drawn and their placements to divine information about her client’s requests. These requests are usually a problem she needs help with or a specific question she may have. Once the psychic consult the Tarot cards, she can then offer advice on how to deal with the issue(s). It should be noted that other types of card decks may be used by psychics to focus their readings and divine information, although Tarot cards, including many modern variations, remain the most popular.

The I-Ching is an ancient Chinese oracle, a book containing the collective wisdom and prophecies of all the ancient sages across a time period of about 2500 years. It can also be thought of as a “manual” or “guidebook” for diviners of universal knowledge. It is said that any situation a person may have is covered I-Ching, especially when interpreted through a skilled psychic. To divine information from the I-Ching, psychics use I Ching sticks (stalks of yarrow plants of the species Achillea millefolium), I-Ching divination coins, or I-Ching cards. Sticks or coins may be thrown on the table and the resulting patterns interpreted. In ancient times, it is thought that bones were used instead of sticks. In the most ancient I-Ching divination practices, it is through that turtle shells were cracked by heat and the patterns of cracks interpreted through an I-Ching filter.

In palm readings, the lines on the palms plus the shape and size of the hands and fingers are used to divine universal knowledge about a person. The left hand is said to convey the potential of an individual and the right hand is used to interpret how the person has used or will use his or her potential. Of course, this destiny can always be altered by intentional will, often motivated by what is learned in a structured psychic reading. The prominent palm lines that are analyzed are the fate line, headline, heart line, and lifeline. However, a good palm reader will go much deeper and analyze the smaller lines on the palms as well.

This tradition of structured psychic readings is thought to have originated in medieval England with the traveling gypsies. A psychic will give her client a cup of hot loose-leaf tea to drink. The time it takes the client to sip the tea can be used by the psychic to get to know the client and why she is seeking the help of a psychic. The cup is then turned upside down and the pattern of the remaining tea leaves are studied by the psychic for divination and interpretation. Coffee grounds left in the bottom of a cup can or the sediments left behind in a glass of wine also be used for the same purpose.

Runes are the symbolic characters of an ancient Indo-European language, Germanic in origin, most likely Celtic (although some historians do not include the old Celtic languages in the Germanic languages). While there are several versions of Runic language symbols, most historians believe they originally hail from a highly secretive tribe called the Teutons. They were known for their magical and psychic powers, but their exact methods remained a mystery because they intentionally hid them. In fact, the word “runes” literally means mystery and it’s a mystery many archeologists would love to solve. The Teutons would inscribe the ancient runes on the softwood branches of various fruit trees to give them life. Today, you can find rune stones and rune symbols carved into pieces of wood. Some psychics also use rune card decks for divination. In the Wicca tradition of divination, runes are referred to as “magick runes” and can also be used to cast charms.

Crystal balls are most often made from quartz that has been heated and crushed. The “impurities” are then removed and the clear to translucent quartz is then shaped into a smooth globe that looks like cracked glass. However, some psychics prefer a more natural crystal ball or a so-called “real” crystal ball that is simply carved and shaped from a solid piece of quartz which contains other elements mixed with quartz. However, you should not get hung up on the type of crystal ball or other crystals your psychic uses as they can use any crystal to divine knowledge from the universe. The divination tools that a psychic use is as personal a wardrobe but in the end, they all serve the same basic purposes.

Psychics often use other types of crystals for divination too. For example, crystals are thought to have innate healing properties. Therefore, psychic healers often use various crystals in psychic healing readings, sometimes placing the stones on their clients’ primary chakra vortexes. Crystals are often hung on pendulums too to help give clarity to yes or no questions.

Do You Have To Have Psychic Abilities To Perform Structured Psychic Readings?

It is said that anyone can learn to do structured psychic readings since the divination comes from an outside energy force in the universe conveyed through the divination tool. However, the diviner must learn how to interpret what she is seeing, and this can be tricky if she does not have well developed extrasensory perception. Therefore, finding a psychic with a strong natural psychic gift will still produce a better and more useful structured reading.

On the other hand, if you have personal aspirations to learn how to do your own structured psychic readings, you can become quite proficient at interpretation with practice and the right guide to help you along even if you don’t have a particularly well developed sixth sense. Keep in mind too that we’re all born with at least some psychic abilities but in the modern world, we tend to lose this as we mature. Unblocking your chakras can help you become more open to the psychic universe again.

Why Would You Want a Structured Psychic Reading?

Structured psychic readings are usually more about gaining insight and deeper understanding of what is happening in the present and what has occurred in the past so you can move forward on more solid ground. These types of readings can help you mend personal relationships and forge stronger and more rewarding personal bonds going forward. They can help you realize the possibilities you never dreamed of before. Structured psychic readings can also help you make important decisions such as career choices and whether or not you should move. They can also give you a clearer purpose in life and help you gain balance and set priorities.

We have only given examples of some of the most popular divination tools used by psychics but there are many more and some may even seem strange to you! For example, psychics in ancient China are thought to have used live chickens to divine knowledge. Some psychics use blackened mirrors or reflections on moving water for divination. Others use ever-changing cloud formations, the ripples in the sand, or other morphing patterns in nature. The point is that almost anything can be used as a divination tool because universal energy encompasses everything.

Seek the advice from a psychic with whom you feel the most comfortable with and or someone who has come personally recommended to you for a particular type of problem. The type of divination tool she uses is more akin to how an office is decorated than to the end result of your particular psychic reading.