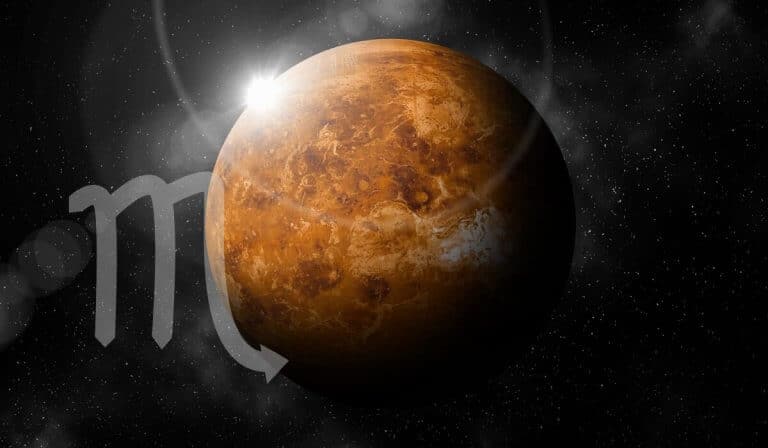 “I must get my soul back from you; I am killing my flesh without it.”

This soul-wrenching obsession can be felt heavily in the air with so much activity in the diabolical 8th sign of the Zodiac which deals with life and death. Endings abound; but so, do beginnings, if we can use the Scorpionic intuition.

Venus is in fall in Mars/Pluto ruled Scorpio as she rules Taurus and being the ruler of Scorpio’s polarity, she is automatically bereft and without her full functional dignity in this transmutation-oriented sign.

She feels out of depth and she sinks in Pluto’s netherworld of the unconscious. She swims in the debris of unprocessed information, traumas, and wounds.

Scorpio rules the process of procreation and elimination, here Venus takes on an unprecedented intensity. This is the archetype of the femme fatale, the dangerous sex-bomb.

Let us explore the archetype of the femme fatale.

an attractive and seductive woman, especially one who will ultimately cause distress to a man who becomes involved with her.

Venus, the symbol of the feminine becomes a seductress here. Not saying she won’t be a good wife, but that is more Venus in rulership in Taurus’ game. Not Venus in Scorpio.

Why is Venus so interested in sex? It’s because now she is in the 8th house of the zodiac which deals with raw, animal sexuality and magnetism. Now you understand why Venus here can become hyper-sexualized or repressed to such a degree that she assumes the archetype of the shrew, the vamp or the siren.

Remember how the sirens sang from the ocean (Scorpio) and lured sailors to their deaths(Pluto/Scorpio)? Very effective depiction of Venus in fall in Scorpio, presumably in hard aspect to Pluto/Mars/Saturn!

Venus in Scorpio is anything but trivial, she is intense and as I mentioned; she can be a very strong wife and companion. Sometimes her strength can intimidate her partner. One must be prepared for a jealous wife/husband waiting at home.

Yes, she will go through your texts if she suspects you. She will check and double-check if she thinks you’re cheating on her and her intuitive awareness is through the roof. Venus in Scorpio wants loyalty and if you can keep her hooked, boy, is she loyal!

After all, Scorpio is fixed, and this gives Venus her concentration and her staying power in this sign. The skies are emanating deep womb energy with so much going on in feminine signs. Think of Uranus in Taurus opposite Venus, think of all the planets in Cappy, again female and of course, we are discussing the very symbol of femininity, Venus herself!

What can you expect with this vibe? Tons of electric sexual energy, unreleased trauma that calls for healing and unhealed debris from the unconscious. Time to get that bodywork session. Time to use the Plutonic sword of Scorpio and literally chop off the unnecessary. Time for a rebirth!