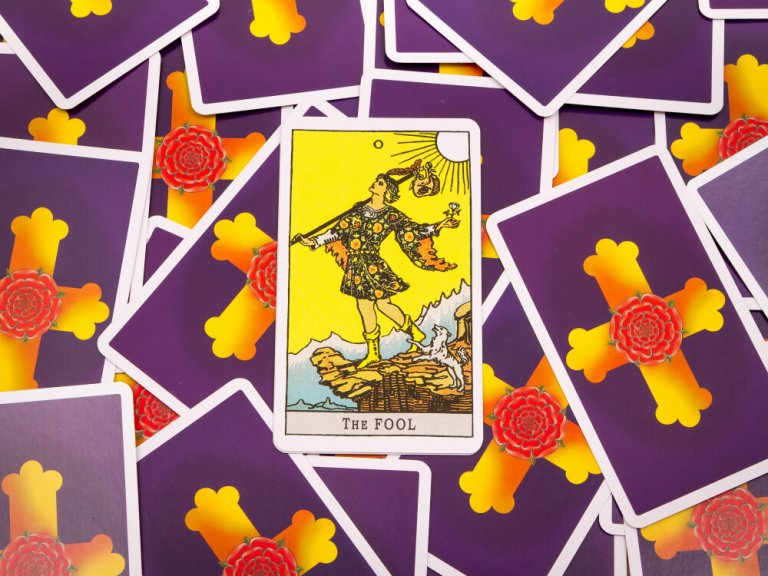 It is no surprise that The Fool Tarot Card is related to new beginnings or new cycles. Drawing this card during a Tarot reading is a clear sign that a transition is very near. It can mark a change in many fields of your life, like for example love, family, friendship or even in your professional environment. The big question here is to see if the meaning of the card is positive or negative. It all depends on the context and the cards that are surrounding The Fool.

Although the name of the card may imply foolishness, the real meaning of this card goes deeper. Of course, there is a relationship between The Fool and being naïve, but there is also a fearless element. The Fool is also a traveler, that is ready to face the world only armed with a bag of tricks. A metaphorical bag. The Fool is someone about to take a journey and try something new, without any kind of hesitation.

It is the sense of adventure that drives The Fool to its odyssey. He will use his heart as a compass and won’t be afraid to take quick decisions in order to complete his voyage. Which in other words is nothing more than the path to adulthood.

This is where the risk of stumbling upon the negative meaning of The Fool emerges. This card can also represent a lack of discipline or experience. Sometimes The Fool is so passionate that ends up crossing the line. He is wild and rebellious. And this is exactly what could bring him into trouble.

The number of The Fool

It is no wonder that The Fool is a card that could show a tendency to being unable of taking concrete decisions. Since it is the beginning of the road and nothing has materialized yet, the number of this card is 0. This should not have a great incidence in your case, unless you have a tendency to let life direct you wherever it wants, without you even taking the time to add some words about it.

The good news about The Fool is that the meaning of this card has evolved with time. Now, you can really feel lucky about drawing this card. But before, its perception was a bit darker. The Fool used to be linked with future drugs or drinking excesses, or possibly some mental problems related to sudden mood changes or in extreme cases a bipolar behavior.

The faces of The Fool

The evolution of The Fool has not only been in terms of meaning. The image of this card has also gone through a slide change in terms of appearance. Before, The Fool used to be shown as a ragged character, a kind of crazy wonderer or even a beggar.

Even the dog in both cards is playing a different role. In the first, the dog contributes to humiliate The Fool and expose him to the world. And on the Rider-Waite the dog is warning The Fool about the cliff and the dangers ahead.

If you are planning to expand your business horizons or are in the process of creating something on your own, The Fool is a very promising card. In terms of career, it can also be associated with a period in which you will be absorbed with work but in a positive way. You will be excited about your task and performed it with love and soul.

But be careful, the problem with this is that you can fall on a routine that could make you feel overwhelmed. In order to avoid this, it is very important to have a perspective on the reasons why you are doing what you are doing. Especially if you are the kind that the less you see your work as work, the more you enjoy it.

Understanding the Fool in love

In matters of the heart, The Fool card could be a blessing. Particularly for a single person or those seeking a relationship. If you are attracted to someone that could turn your life around, that is impulsive and is not attached to a conventional behavior, this card is a good omen.

On the contrary, if you dream of something more solid and serious, The Fool is a less desired choice. This could translate into dealing with someone a bit childish, that is not 100% sure about settling down. You just have to keep your finger crossed that among the next cards of the draw, there is a card that is linked with commitment. This is the only way to neutralize The Fool’s effect.