Some events trigger intense change.  The death of George Floyd is one of those events.  This article will look at the astrological significance of his death in relation to the United States birth chart.  The technique for comparing two charts is known as synastry.  We will explore the astrological implications of his death in light of the social change reverberating through the United States as a result of deeply problematic issues embedded in America’s culture.

Synastry, the Impact of One Astrological Chart on Another

When you compare two charts, one sits on the inside of the other so that you can see how the outer chart impacts the inner chart.  Below is the birth chart of the United States and the chart of the day and approximate time of George Floyd’s death on May 25, 2020, in Minneapolis, Minnesota around 8:30 pm. 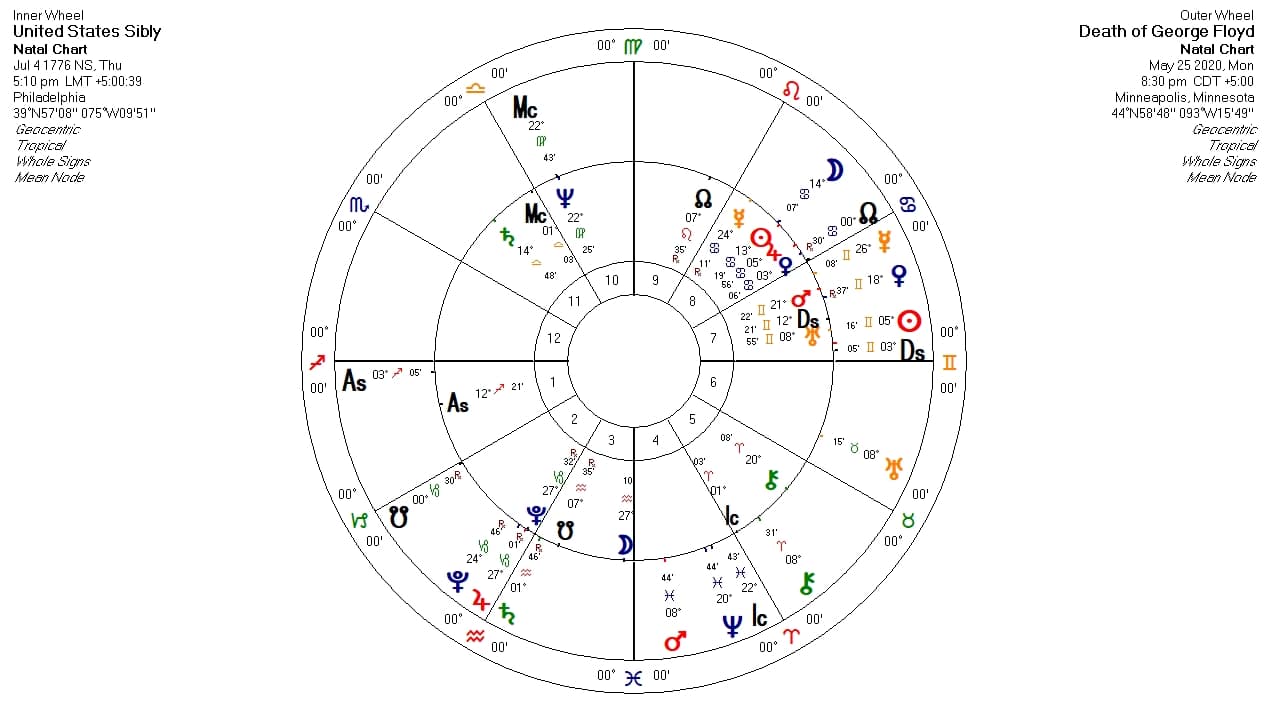 There are many important impacts to interpret from the chart of George Floyd’s death related to the US birth chart.  The US is dealing with a social crisis that was triggered by this event.  While the systemic and cultural problems have been deeply embedded in the US “psyche”, his death is catalyzing change.

Shock to the System (Uranus Triggered)

When looking for points to interpret in a chart, an astrologer wants to identify any significant aspects from the outer chart to the inner chart, and there are many in the example above.  I will reference them to explain the interpretation.  If you look in the 7th segment (or 7th House) of the US chart you will see the symbol for Uranus at 8 degrees and 55 minutes (8d55m) of Gemini.

On the day of George Floyd’s death, the Sun was at 5d16 minutes of Gemini, making it within orb of a conjunction (or merging) of the US Uranus, indicating the potential for disruption.  This alignment is significant but not as significant as the fact that three other points were at 8 degrees and approaching near-perfect alignment with the US Uranus.

In technical terms, points approach to aspect when they are working their way towards the same degree as another point, and the separate once they have passed over the same degree.  Approaching energy is building and stronger than separating energy.  And the closer to the exact degree one point is to another, the stronger the impact.

On the day of George Floyd’s death, Mars was at 8d44 minutes of Pisces, forming a square (challenging) relationship with the US Uranus with only 11m of difference.  This close approaching aspect is profound since it involves the aggressive and explosive energy of Mars and the awakening energy of Uranus.

Additionally, Chiron was in Aries at 8d31m approaching a sextile (complimentary) aspect with the US Uranus.  Chiron is the wounded healer, so there is potential for healing a wound through action (Aries) to awaken the US to issues related to law, justice, and relationships (7th House).  Finally, Uranus itself was at 8d15 minutes of Taurus in an approaching semi-sextile relationship with itself in the US chart.

The semi-sextile indicates that the energy between the two points is not easily seen but can be powerfully felt if the aspect is very near exact, which is certainly the case here.  Another way to think about this energy is how we describe a “blind spot” when driving.  We may or may not sense the other vehicle, but we cannot “see” it until we try to change lanes and we either hit the other vehicle or they honk their horn to alert us that they are there.

Essentially four different points are exerting pressure on the US Uranus, indicating that the energy of this death and its subsequent impact is filled with revolutionary potential.  That potential continues to be realized with mass protesting still ongoing, rapidly changing perceptions about race making it into the public social sphere on a massive scale, and dramatic actions addressing systemic racism (removing or tearing down statues of Confederate icons and policy changes in major sports).

Jupiter Merged with the US Pluto

Also, on that day, Jupiter, which rules expansion and exploration and the sign Sagittarius, which deals with beliefs, was retrograde at 27d01m and just separating from the US Pluto (death and rebirth) which was at 27d32m at the birth of the nation. Thus, Jupiter completed its 2nd pass over Pluto, forcing the transformative nature of the US Pluto to further expand.

Since Pluto sits in the 2nd House of Resources and Security, and the death of George Floyd triggered a protest that quickly spread nationwide, then worldwide (Jupiter), the US will feel and know the impact of this death in the area of life that affects people’s stability and security.  This energy will not dissipate quickly but will rather expand and have a transformative effect on the foundation (2nd House) of the US.

More generally, Pluto itself is approaching its return (247 years in the making) and is near enough the conjunction to feel the upheaval it will bring to the foundations of US society (2nd House) through the responsibility and consequences energy of Capricorn.  Additionally, Neptune is approaching an exact opposition with itself.  It is currently transiting through the “soul” of the US chart in the 4th House of Family at 20 degrees of Pisces, which places it nearly opposite the US Neptune at 22 degrees of Virgo in the 10th House of Prosperity.  There is a re-balancing potential, at the spiritual and “belief” level of the nation contained within the day of George Floyd’s death.

There are two other key alignments to note, but they do not lead this interpretation because they are separating rather than approaching.  First, the Moon on May 25th merged with the Sun of the US chart.  The “soul energy” (Moon) of that day merged with the “life path energy” (Sun) in the sign of Cancer.  The Moon is at its most powerful in the sign of Cancer, so what happened and how it triggered events will be deeply felt by everyone in some way.

And lastly, Venus at 18d37m was within orb and conjunct the natal US Mars at 21d22m of Gemini.  It was retrograde, so actually moving away from Mars rather than towards it, even though it is in an earlier degree.  Venus/Mars aspects indicate a dynamic interchange between relating energy and selfish energy.  With Venus squaring Neptune at 20d, which means Neptune was squaring the US Mars, it is clear that this event will force the nation to react (Mars).