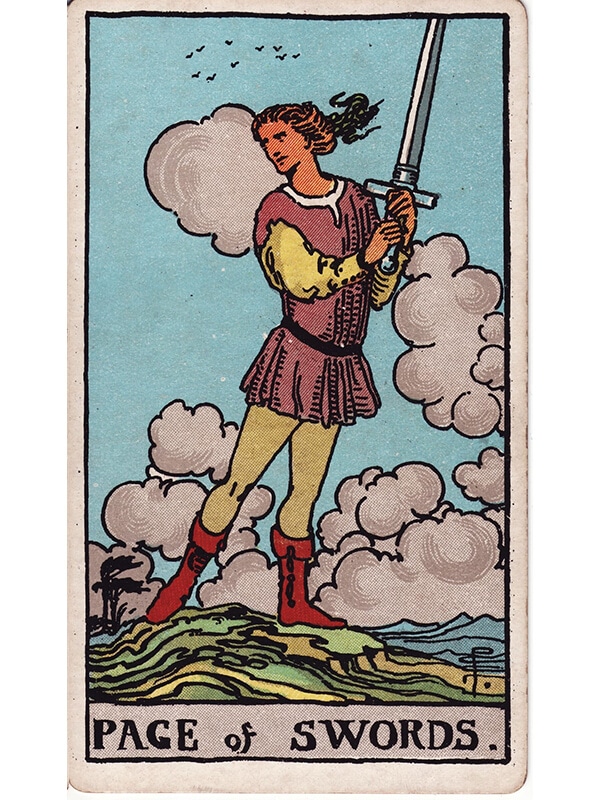 Upright: young man or woman eager to learn, talkative and curious, and full of ideas

The youngest of the four court cards in the suit of swords, the Page of Swords is a proactive vector of intellect and reason, the initial impulse of rationality over instinctual reaction. They can seem aloof and have their heads in the clouds, but their most striking behaviors are an almost insatiable curiosity and a craving for new experiences and information that will keep their interest fresh. They represent the aspect of youth that craves education and recognizes the difference it can make on a daily basis.

The Page of Swords in the Rider-Waite Smith Tarot deck is a beautiful and lithe young man with long hair and a soft, androgynous face. He uses both hands to carry the sword that represents his suit. He seems to be particularly aware of his surroundings as if he were standing guard over something or someone.

There are numerous white clouds in the sky behind him to highlight the element of Air found in all the Swords cards.

It should once more be noted that several modern tarot decks and variations around the Rider deck have turned the Page of Swords (and all the other pages) into females, to restore a kind of balance and parity to the court cards.

Among the court cards, the Pages usually represent the initial spark of the element and themes of the suit of Swords. Accordingly, the core meaning of the Page of Swords represents new ideas and concepts. The Page of Swords is full of curiosity and wants to use his mind and intellect in as many situations as possible. Good or bad, every new experience is an excuse to have learned something and grown.

This natural curiosity and drive usually fill the Page of Swords with a lot of dynamic energy, and enough control and patience to turn that energy into something productive. The Page of Swords realizes how much he still needs to learn and often turns into the best kind of student any teacher might have, a student that knows he is there to learn, and willing to put as much time and effort into it as required.

The Page of Swords often represents a beautiful and charismatic young man or woman, someone witty and fun but that still has a lot to learn in life. As such, they often end up in a rather unstable relationship, torn between genuine information and the desire to acquire more and more experience.

As a living embodiment of young intellect, the Page of Swords will be particularly negatively affected by any kind of betrayal, half-truths, or outright lies.

The Page of Swords is a good candidate for the Querent card if he or she represents the archetype of the student, someone eager to learn as much as possible, and at any cost.

Career encompasses school and education if that is your current stage; work that is necessary, but not what you would consider a career path; and your actual career path. Regardless of your current stage of development, the Page of Swords represents open-mindedness and willingness to learn.

If you are a student, then drawing this card indicates that you need to see your studies as an amazing chance to develop your dreams and learn how to bring them into the world. Each new class represents a Page of Swords moment when you begin.

If you are doing work that is necessary, but not a career, then you should look for opportunities to learn something new about your work. Perhaps you should do some professional development or look for chances to improve your skills through study or training. Keep learning, no matter how long you have been on the job

If you are in your career, and the Page of Swords appears in a reading, then you need to look for new and untested ideas that could help you in your career path and industry. You want to engage new entrepreneurs and listen to every new idea. Among them may be a true breakthrough that can help you leap forward in your career path.

A reversed Page of Swords might exacerbate some of the downsides that are thematically present in this card. More specifically, this could echo the restlessness and eagerness of the subject of the reading, leading to rash behavior and actions that have not been thought out, forcing the situation into an uncomfortable place where stimuli and events will have to be dealt with, without any help from within, and that unpreparedness might have some negative consequences on the subject’s life.

Reversed, this card indicates that you are struggling to communicate effectively because you, or the other person, is being too vague or unsure when expressing themselves. You need to ask more questions and spend some extra time figuring out just what you want from the relationship before you get further into it and discover it is not what you want or who you want to be with.

When this card appears reversed in a question about school, work, or career, then you may encounter confusion about your role and how best to go about succeeding. You will have to put more effort into conversations and research to determine if you are on the right path or the wrong one. If you are “lazy” mentally, then you will encounter many negative outcomes.