Spirit of the Horse 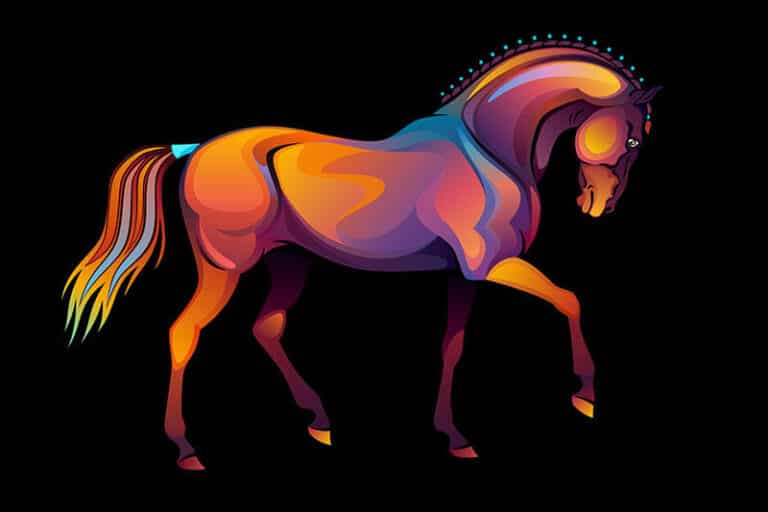 Each animal has a spiritual essence. We capture that idea in totems and emblems, commonly seen in mascots for professional, collegiate, and high school sports teams. Whatever the “power” of that animal, we hope to channel it through the totem or emblem into our energy field to help us succeed, win, or thrive. This article will look at the spirit of the horse as someone’s chosen power animal.

Equine energy is often associated with the following attributes:

If you connect with the horse as your spirit animal, then you will tend to be someone who prefers to build close friendships and feel a strong sense of duty to your family. You wish to be part of a herd, supporting others and being supported by them.

According to DJ Conway, in her book Animal Magick, the magickal attributes of the horse include: “stamina, endurance, faithfulness. It symbolizes freedom where it runs free; when it works with humans, it represents friendship and cooperation. Travel, journey, swiftness, friends, loyalty. Astral traveling. Companion and guardian when taking a trip. Guide to overcoming obstacles. Checking a situation for possible danger.” (88)

The Horse has played a prominent role in every culture and throughout history. It was the primary method of transport until the invention of the steam engine and the internal combustion engine. So, every culture has positive and significant depictions of the horse. It even has special variations: the unicorn, Pegasus, and alicorn.

Horses feature prominently in many Greek mythological stories. There are four horses, Aethon, Pyrois, Phlegon, and Eous that pull Apollo’s chariot, the Sun, across the sky. In the trials of Heracles, he does battle with Diomedes, who has horses that breathe fire and consume human flesh. The most famous Greek horse is Pegasus, the winged horse Bellerophon rode on his quest to retrieve the Golden Fleece.

The most famous horse in Norse tradition is Sleipnir, the eight-legged horse Odin rode. The horse is the son of Loki, the trickster god in Norse mythology. Odin rides Sleipnir into battle, most famously into Jötunheimr, the realm of the ice giants. He also rides him to Hel.

The Valkyrie, the warrior goddesses who retrieved fallen warriors from the battlefield to bring them to Valhalla, rode horses, but they were not the Pegasi. The image of the Valkyrie riding Pegasus originates in Marvel Comics when the character Valkyrie is introduced in Avengers 83 (1970), and became a member of the Defenders.

Interestingly enough, some of the strongest totems for the Horse are found in Native American lore and history, which is unique because the horse is not indigenous to North America. Horses were brought into the continent by European explorers and quickly adapted to and thrived in their environment. Native Americans became some of the most prodigious and skilled riders in all the world. And one of the most famous leaders in Lakota history was named “Crazy Horse”.

Alleged photo of Crazy Horse in 1877

Wikipedia has a fantastic list of famous horses from every genre of fiction: film, television, animation, comics, song, video games, and toys. We also know about the “power of the horse” any time we talk about the power of the engine of a car. The Bugatti Chiron produces 1479 bhp (brake horsepower) while the Toyota Corolla produces 169 bhp.

The Unicorn is a mythological creature, depicted commonly as white, who only appears to virginal maidens, according to the oldest folklore. In modern times the unicorn has come to mean, one-of-kind, or “truly unique”.

The winged horse Bellerophon rode has become another horse totem that appears across all fictional media. Even one movie studio used Pegasus as its logo, Tristar Pictures, which was founded in 1982. Like the unicorn, Pegasus shows up everywhere from film to comic books.

Black Beauty was introduced in 1877 by novelist Anna Sewell in her book entitled: Black Beauty: His Grooms and Companions, the Autobiography of a Horse. Eventually, the novel would be adapted into over eight films and one tv series.

Inviting in Horse Energy and Connecting with a Horse Spirit Animal

Even if you do not consider yourself a “horse person”, you can invite horse energy into your life when certain situations would benefit from access to this energy. Horse energy can be especially helpful if you need to connect with family or get a team of people to work well together. Their energy is very useful when you need to “have many hands make light work”.

According to Steven Farmer, if the horse is your power animal …

The energy of this animal can help with situations that require endurance, patience, and fortitude. Invite the horse to help you be friendly, playful, and supportive. You can ask for help from one of the fictional horses or from one of the many lines of horses (Arabian, Appaloosa, Clydesdale, Mustang, Andalusian, and so on). They can lead you safely through challenges by helping you find others for your herd; when the herd is strong, there is no obstacle you cannot overcome.

If you are curious to know if the horse, or a specific horse, is one of your spirit animals, you can consult a spirit animal communicator, Shaman, or psychic. If you want to find out on your own, you can meditate or muscle test to find out if you have a connection to horses.

7 Causes of Depression in the Modern World